At this time, I am taking all those hats off and writing to you as a fellow Canadian who is deeply concerned by the DFO 2020 fisheries management measures to protect Fraser chinook, announced yesterday afternoon.  These are my views and mine alone, and it is time someone said something, because enough is enough.  So please read on.

June 19, 2020 will go down as a historic day, and for all the wrong reasons.  It will be remembered as the day chinook fishing out of Vancouver was closed, your rights as a Canadian citizen were trampled on, and the day DFO made it clear they have no respect for the public fishery, science, and due process.  Today I am going to break down the regulations for you, then I am going to show you the science, then I am going to tell you why this happened.

So, let’s get the closure out of the way, because I know most of you are trying to make sense of it and want to know if you can go fishing.  If you want to see the full scale and impact of the measures go to this link 2020 Fraser Chinook Management Measures. Below I am going to focus on the Vancouver area fisheries.

Here is the Fisheries Notice that impacts our local fisheries.

Immediately to 23:59 hours August 31:  No fishing for Chinook

Approaches to Fraser River – Subareas 29-6, 29-7, 29-9 to 29-17 and the non-tidal waters of the Fraser River from Mission Bridge to the confluence with Sawmill Creek:  00:01 Hours January 1 to 23:59 Hours November 1: No fishing for salmon (Fishing opportunities for specific salmon stocks may be considered at a later date).

So, the text in red is represented in this map as the pink cross hatched area.  You can no longer fish for chinook in this area effective immediately until September 1st.  That means no chinook fishing this summer off the Fraser.  No Bell Buoy, N Arm, T-10, South Arm.  Forget about your favorite Howe Sound spots.  No Hole in the Wall, Cowan, Roger Curtis, Hump, Salmon Rock, Grace, all closed to fishing for chinook.

Next year they will push to have this regulation in place for April 1, 2021, so in effect spring and summer chinook fishing out of Vancouver is over unless we do something about it. 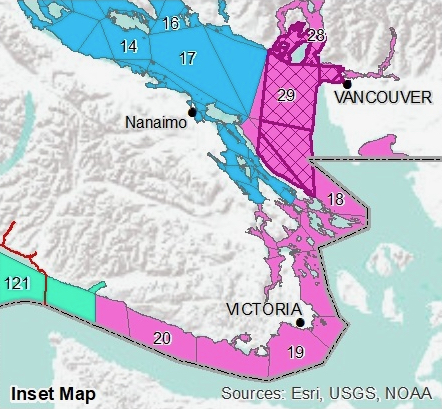 Here are some of the opportunities where you can fish for chinook C&R, retain chinook later in the summer, or fish for coho:

So, let’s talk about some of the science.  If you read the DFO press release it is going to tell you these closures are to protect stocks of concern.  They will even tell you they are closing the August chinook fishery off the Fraser for the healthy runs of Thomson 4.1 chinook because there is too much interceptions of earlier run timing stocks of concern.  In short, this is all propaganda.

Here is a pie chart showing the public fishery encounter rate in our local waters and a bit further south.  This area is called “inside waters.”  I have put the stocks of concern in red.  You can see we have a very low encounter rate.  The next graph shows the run timing of the different chinook stocks.  You can see when the bulk of the 4.1 chinook are coming into the Fraser, the earlier run timing 4.2 and 5.2 chinook stocks of concern are long gone. 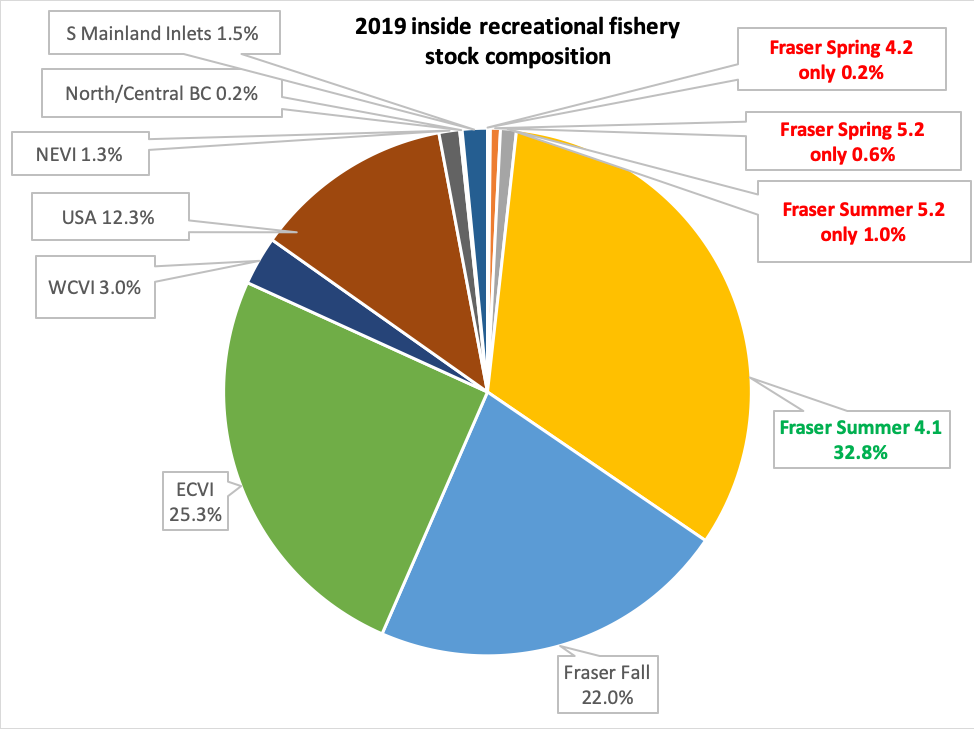 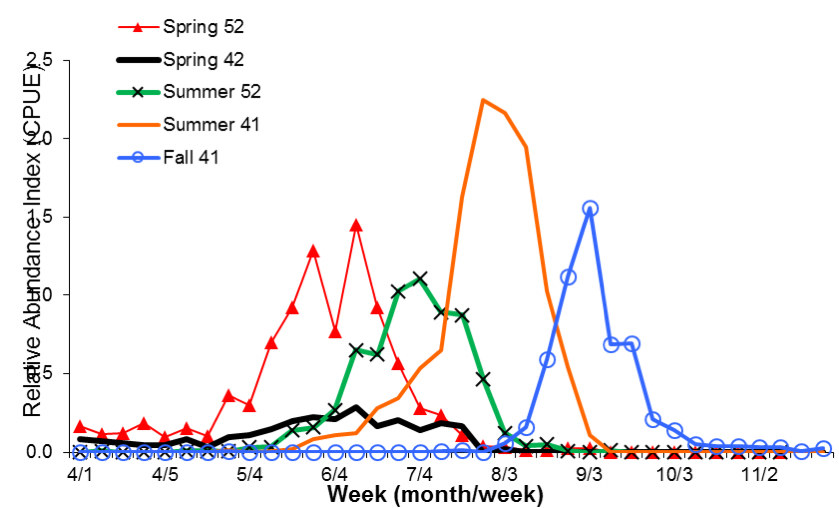 Data based on returns to Fraser River at the Albion chinook test fishery (2000-2001).

Based on the fact we are encountering stocks of concern 1% or less and the fact they are not present during the peak of the 4.1 chinook migration, then I hope you are asking yourself why we are closed April 1 to Sep 1 in 2020, and in particular, August.

DFO (Department of Fisheries and Oceans), ENGOs (environmental non-government organization) and FN (First Nations) will tell you that the public fishery needs to be closed to protect and save stocks of concern.  Well how does closing a fishery down that barely impacts stocks of concern save a stock(s)?  The truth is it doesn’t have any meaningful impact at all.  We are talking about managing fractions of a percentage here.

So why do they do it?  Well they do it because is make it look like DFO is making management decisions to save the stocks.  It’s all smoke and mirror designed to make them look good and hide the fact that management decisions are not being made on science but are being made by politicians eager to cater to FN and ENGOs.  In the meantime, while all this is happening, there are FN gill net openings (just like last year) in the Fraser for the very chinook DFO is trying to protect by shutting us down.

The truth is DFO has no major plans in place to fix the devastated habitat, they have no plans to reduce the seal population that consumes over 40% of all out migrating chinook smolts from the Fraser, they have limited ability to curtail illegal gill nets in the Fraser, and they have no desire to stand up to First Nations in court.  Instead they close the public chinook fishery because to the general public it looks like they are doing the right thing and that means votes.

Of course, there are politics at play here as well.  Lower Fraser River First Nations have made it abundantly clear in their comments on the Integrated Fisheries Management Plan that they are not pleased with public fishery off the Fraser mouth.  ENGOs have repeatedly called for the closure of chinook fisheries and catch and release fishing.  DFO has clearly decided to listen to FN and ENGOs and push science-based decisions, logic, common sense, and their duty to manage the resource for all Canadians, aside.  In all the meetings and consultation processes that I am involved in, not once was this level of closure discussed.  This closure is about one thing and one thing only, and that is the systematic destruction of the public fishery, the re-allocation of those fish to FN for harvest, and catering to FN and ENGOs for votes.

The August closure is very telling as this is the time of year when stocks of concern are gone, and healthy stocks are prevalent.  So, let’s look at last August when FN harvested 25,000 Fraser chinook and the public fishery harvested 7,000.  These are the non-stock of concern chinook, also known as Thompson 4.1 as per the pie chart and graph above.  Normally we would harvest about 3,500 but we all know how good the fishing was last year and there was a closure for 3 months prior, so effort and success was high.  I don’t have a problem with FN taking 25,000 fish, although it was done by gill net and certainly had a negative impact on sturgeon, summer coho, and summer steelhead.  I do have a problem though when FN gets on the news and complains about the public fishery off the Fraser Mouth and then literally tells the media (via TV and newspaper articles) there was not enough fish for their elders.  Where did the 25,000 fish go?  Apparently not to the right people and it sounds like 25,000 isn’t enough because they want exclusive access and they just got it.  On top of this ENGOs are publishing articles and spreading simple verbiage that there is a chinook crisis while the reality is many rivers in the inside waters had excellent returns of chinook, some at record or near record levels.

With the public fishery for chinook closed all spring and summer, what is going to happen this August?  Are the gill nets coming out of the river?  Will the healthy stocks of non-concern be left to pass up a gill net free Fraser?  I think we all know the answer to this question.  Surely if the low impact we have as the public fishery is worthy of a closure there should be no gill netting in the Fraser.  The answer is of course no, there will be in season gill net openings and any fish “saved” from the Fraser mouth closure will be re-allocated to FN harvest while your boat rots at the dock.

Like I said earlier, enough is enough.  As Canadians, we also have rights to access the resource, especially when we aren’t impacting stocks of concern or they just aren’t present.  DFO was given very specific options that check these boxes by the Sport Fish Advisory Board.  What we got back were huge closures designed to have maximum optical benefit and were squarely designed to get us off the water once and for all and appease FN and ENGO interests.

Yes, FN has priority access to fish, but when the Canadian public fishery is encountering stocks of concerns less than 1%, or not all, we should be on the water.  We should be allowed to harvest a chinook for our families, to teach our kids to fish and respect nature, and at the very least we should be able to harvest a hatchery chinook.  This was explained to DFO at the highest levels and backed by area specific science.  Look at the results.  For that the Fisheries Minister and the Managers associated with these measures should be ashamed of themselves.  I truly don’t know how they can look a fellow Canadian in the eye.

DFO has gone too far, this government has gone too far, and I am tired of the two-tier management approach where the rights of all Canadians, regardless of origin, are trampled on.  The advisory process and any trust that has been built up with it has been destroyed.  The time for drastic action is now.  YOU need to do something about this before there is no fishing period, and believe me, we are almost there.  DFO won’t listen to science but they will listen to votes and that’s where you come in.  This is about politics, optics, and votes, nothing more.

Join groups that are pushing science based messages to DFO, like the Sport Fishing Institute of BC or the Public Fishery Alliance that advocates for access to sustainable fisheries.

Write an email to these people and tell them enough is enough and you aren’t going to take this sitting down and tell them how you are going to vote.

You better believe there are going to be some protests as well.  This is it, DFO has made it clear they don’t care about science-based decisions, the public fishery, your rights, coastal communities, tourism, and the local economy and social value of fishing in general.  So, get involved, your ability to fish and that of future generations depends on it.

Posted on June 21, 2020 by Jason in Fishing Articles, FIshing Reports