Finally we are going to see some good weather and just in time for the long weekend! There are a few little showers in the forecast but the next 14 days look great and temperatures will be rising into the end of next week.

On the river front we had some good fishing on the Squamish this last week with the first solid reports of salmon fry in the lower river. With the warm spell coming the fry should really start pumping. Check out Matt’s report below for more details.

This is also a great time for steelheading on the Vedder. There were good reports out in the valley this week and we expect with the dropping water we will see it get even better into the weekend.

Andre has been cutthroating and though things have been challenging for him, this warm spell should be awesome for the entire cutthroat fishery. Check out his report below.

Last but not least, the saltwater fishing has been excellent. A bump of fish pulled through the harbour last week. A bunch of guys have been taking our advice and getting out to test drive boats and they have been consistently hooking good numbers of fish while doing it. Check out Jason’s saltwater report for more details.

If you are a saltwater fisherman, we also have another cool announcement – Over the last 4 seasons our guides have been working closely with O’ki Tackle to design custom flashers. Last year we found a real winner. It was only used on our boats but it was so good we had to make it available to the public!

A flasher with glow infused plastic!

We have named it after our flagship Grady White charter boat “The Salty Dawg” but what makes it special is the actual plastic of the blade is infused with glow dust! Combined with a slightly translucent chartreuse blade color and kinetic tape it flashes better than most shallow water flashers and then glows better than most deep water flashers! Check out Jason’s write up on it in the saltwater fishing report below. We just got a big shipment in the shop so get them before they sell out!

If you are a fly fisherman we have something special for you as well. Every year we travel to Cuba to fish bonefish, permit and tarpon in one of the best warm water fishing locations in the world. 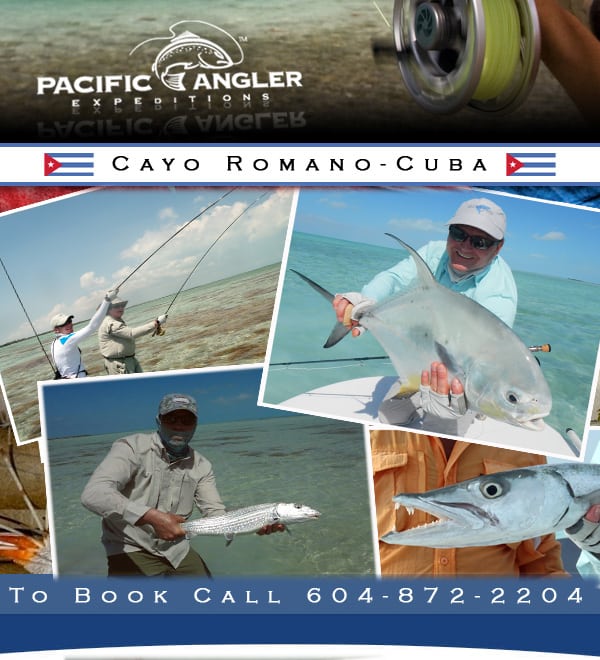 This trip usually sells out in a flash but we had a last minute cancellation and we have availability! If you have ever dreamed of warm water fishing or you are a seasoned warm water veteran and want to escape Vancouver, call us! The spots will not last!

ON TO THE REPORT!

Spring steelhead season is upon us and it is one of my favorite times of the year to fish the Chilliwack River. Days are longer, weather is typically better than earlier in the year, and there is a good number of fish around. There are still fresh fish moving through the lower river and you can expect to find fish from the crossing all the way to the fishing boundary.

Those looking to head out this weekend could be in for some good fishing. The rain expected won’t be enough to blow the river out but it should add a bit of colour to the river which will bode well for the weekend warriors.

Vedder Steelhead from this week.

Spring is a great time to get out and fly fish as there can be less pressure on the river at times and with the warmer weather fish are more aggressive. Trout Beads, 4” pink worms, and roe bags should not be left at home if you are going to be heading out anytime soon but Egg Sucking Leeches and Popsicle Patterns in shades of pink, orange, and purple are standards for spring fly fishing.

I went out last Monday to the Stave river for cutthroat but unfortunately did not find a decent school of fish. It was cold, windy and rainy. I was on the west side the whole time. On Wednesday I decided to go back,  so after doing my routine checks starting from the Harrison and not finding any fish I ended up at the Stave.  This time after a good hour of staring at the water I went on the back channels of the east side. I found a pod of cutthroat right away and the hopelessness vanished. After a few casts and a few fly changes, I hooked one on a fry with black back and a silver belly. Shortly after the weather turned for the worse and the fish turned off . I knew they were sitting in the same spot not moving so I started swinging my fly over them and hooked into another one but that was it for the rest of the day. Sometimes the thrill of just finding them is as exciting as catching them, just like when you were a kid and went for an egg hunt during Easter! 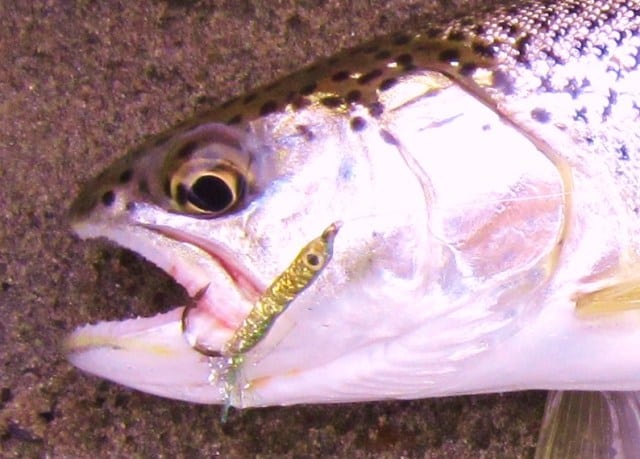 Nice cuthroat from the Stave this week.

So far the Stave river has been the winner for me in the Fraser Valley this year but I will continue to check the other systems as you never know how the day is going to turn out.

The Squamish fished well last weekend. I was out on Saturday and though it was quite busy with both fisherman and non fisherman, we found some private water and hooked some nice fish. We were aiming for steelhead and unfortunately we didn’t find one but the bulltout were willing in the upper river. 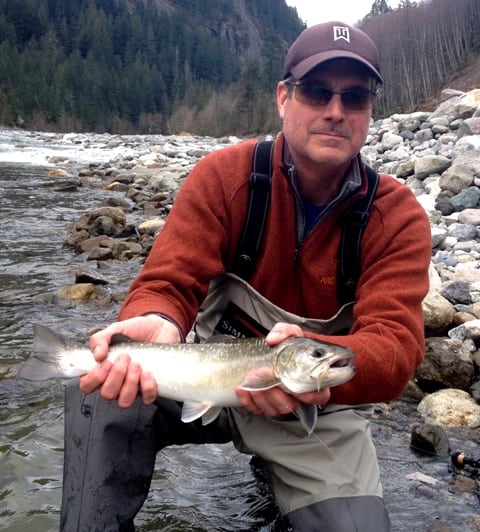 In the lower river I did some searching and found a few pods of salmon fry. I also saw mergansers out on the river diving for fry. In the upper river I did not see any fry or fish ducks. This is right on schedule. Over the next week we should see more fry and the trout should start keying in on them.

We have great weather for the next week with only a little rain in the forecast. It is also going to get warm at the end of next week so expect the salmon fry to be out in better numbers this weekend. If the weather man is on the money with his prediction, it should be quite good next week.

We fished standard bright flies in the lower river for steelhead (pink, orange and purple) and then leaned our presentations to classic sculpin style patterns in the upper river for the bulltrout.

On a side note there were a ton of guys ripping around the upper river on the weekend. I don’t think they were fisherman.  I won’t lie with years of guiding up north I learned to dodge pot holes and drive fast on dirt roads but what I saw on the weekend was not fast driving, it was stupid driving.  Numerous cars and ATVs ripped the road to shreds. At one point I had a guy in a car pass my truck on the inside, fish tailing rocks everywhere! I made a comment to my clients about drivers like that turning up sharp rocks and causing flat tires. 10 minutes later my tire warning light went off and sure enough we had a flat.  If you are on that road, driving fast and safe is fine, driving like an idiot is not! I don’t think it was fisherman but if it was please take a minute and think. The harder you drive, the worse that road will get.

Good Luck – Respect your fellow anglers – Practice catch and release – Make sure your barbs are pinched…. Oh and don’t drive like an idiot!

Well it was a pretty active week and weekend since our last report as a lot of fish rolled in!  On Saturday, the Bell Buoy looked like the August long weekend with at least 40 boats.  The herring were in the area and the chinook piled in as well.  It was some of the best early season fishing any of us have ever seen.  By best I mean that some limits were taken on the morning of Friday and Saturday on 5 hour charters.  That is good fishing anytime of the year but for March that is red hot.  Things slowed down considerably on Sunday as expected as the fishing was hot there on Thursday, Friday, and Saturday.  A lot of fish ended up on the BBQ and the fish that were around still were likely a little shell shocked or sore lipped. 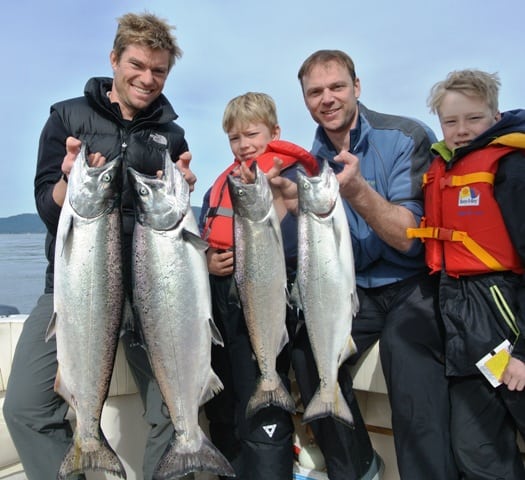 Eddie’s guests with 4 nice chinook from the Bell Buoy on Friday.

So there are definitely some good sized schools of chinook around, cruising our harbour and Howe Sound looking for herring.  This is a really good sign for the Hump, and this fishery is only 2-3 weeks away.

There weren’t a lot of boats up Howe Sound this week because the fishing was so hot off the Bell Buoy.  There were a lot of small fish taken by those who decided to fish Howe Sound and a few keepers, but you really had to work through all the small guys. 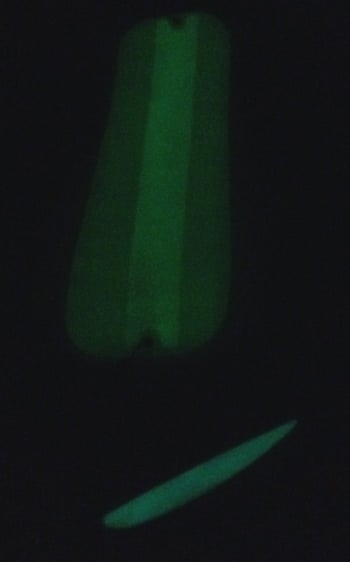 My hot spoon on the weekend was a 3.5 Pesca Gut Bomb and bait was also producing very well.  My hot flasher was the Salty Dawg (named after our 27 foot Grady White guide boat, the Salty Dawg).  This is a flasher that we worked on designing with Ok’i Tackle this past spring and summer.  We fished the prototypes last year on the Hump, Thrasher, T-10, Sandheads and up Howe Sound for winters.  This is a deadly flasher and we did very, very well with this flasher last summer.  It is now a staple in our arsenal and we are happy to share it with you.  It starts with a glow chartreuse blade.  From there we added kinetic tape to one side and an extra center strip of glow tape to the other side.  You should see this flasher light up in the water with the kinetic tape and glow blade!  The first time we saw it in the water we knew it would be deadly for chinook.

That fact that the blade glows and there is an extra center strip of glow tape on one side also makes this flasher at home when fishing down deep or when fishing in dirty water.  If I have this flasher on the boat and my other favorite, the Greeen Onion Glow, I know I am set for chinook salmon in our local waters from up shallow all the way down to 200 feet.  We also have been working on some spoons with Ok’i so stay tuned for more info on those in future reports.  We have stock on the Salty Dawg flasher and the new spoons, so if you want to come down to the shop to take a look, we have what you need! 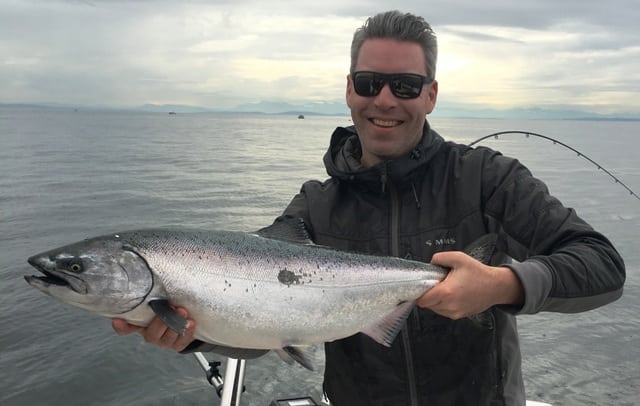 Jason with a fat chinook taken from the Bell on Saturday.

If you want to book a trip for chinook, now is the time as the Hump will get good very soon.  Don’t wait for the report, book in advance so you can request the best dates and tides.  Call Jason at 778-788-8582 to book your trip. 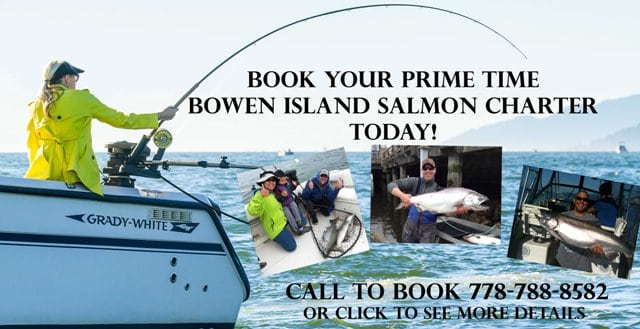