Pacific Angler will be doing one course for December…and it is a crowd pleaser!  Read below for all of the details and cool video of Dimitri tying his “Ghost Prawn”.

On Wednesday December 7th, Dimitri will be demonstrating techniques used to tie the large flies known as “Intruders”, famous for seducing steelhead on the west coast.  Once you have learned and perfected these techniques you will be able to create unique flies from your own vice.

Dimitri will be your instructor for the night.  An avid angler since he can remember, Dimitri has become a stand-out talent in the steelhead angling world.  With his love for winter run steelhead, Dimitri gravitated towards tying the intruder fly which was developed and invented by Ed Ward.  After dedicating hours upon hours perfecting his techniques and developing some of his own, Dimitri has quickly become a respected commercial tier and has excelled in instructing others.  Always willing to give a helping hand, you are sure to learn a thing or two. 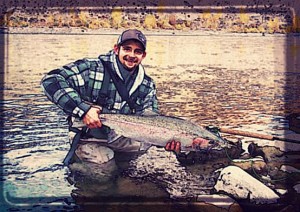 “As with anything, time brings you experience and skill. Thankfully, after many hours spent in front of the vise under my lamp at my tying desk, I’ve developed the skills to produce some pretty cool patterns.

When Dave asked me to whip up something intricate, the first thing that came to mind was ‘PRAWN’.  There are many flies out there that catch steelhead, no one better than the other.  Each has its own place and time…string leeches, marabou popsicles, Spey flies, and intruders.  The list is endless.

The reason for my selection of the prawn is because of the options. You can incorporate so many different materials…rubber legs, rhea, ostrich, polar bear, and seal fur to name a few.  The one in the time-lapse video is what I call the ghost prawn.  Pink and orange tones underneath and white throughout with lots of speckles and spots. It makes for a really translucent & fishy bug in the water. Enjoy the clip and I’ll look forward to seeing you in the shop Wednesday December 7th.”