In early December, we headed off to the southern Fijian island of Beqa (“benga”) for 8 days of diving with some friends.  I had heard some whispers of large giant trevally and other game fish available to the fly angler willing to explore, so I decided to try and add some fishing time to the diving activities.  The daily routine of the trip would be early morning diving followed by afternoons of island life: massages, swimming, snorkeling and, of course, drinking.  I planned to inject as much fishing as I could into those afternoons. 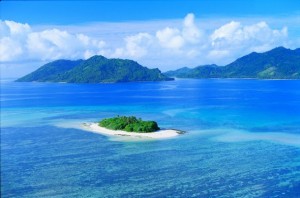 Beqa is a volcanic island at the heart of a lagoon ringed by a large barrier reef.  The lagoon itself is almost 100 square kilometers of clear open water filled with bommies and rock pinnacles providing fantastic reef habitat.  The surrounding barrier reef is over 30 kilometers long, making it one of the largest such reefs in the world.  Beqa lagoon was once considered one of the top ten dive areas in the world for the diversity and quality of reef fish and soft corals.  Unfortunately, the El Nino of the late twentieth century caused some problems for the reefs.  Fortunately, they still hold some of the best diving to be had in the south Pacific.  With good diving, you often find good fishing. 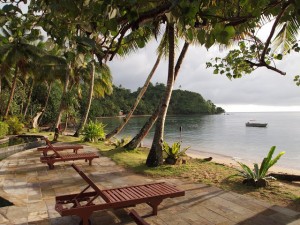 The web proved to be a meagre source for information on fly fishing in Fiji.  I found a few other anglers looking for similar information, but few were offering it.  Only one guide could be found, flyfishfiji.com, and they were on the other side of Fiji from where I would be staying.  It’s rare that I get to page number 8 of a Google search result, but looking for quality information seemed to require it.  Eventually, I came to a couple of conclusions: 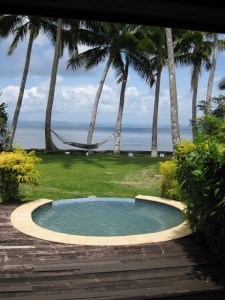 I decided to go “light” with the gear that I would take to Fiji.  While images of giant trevally had me thinking about 12 weight rods with 300+ yard reels, I opted instead for two rods: an 8 weight and a 10 weight with corresponding reels rigged with floating lines.  I would also pack along intermediate lines for both weights, in case I needed to get the fly down below the surface.  (Special thanks to Matt Sharp from Pacific Angler for loaning the great gear… made the trip!)

For flies, I had an assortment of poppers, clousers and other saltwater baitfish patterns.  I concentrated on chartreuse, white and red colours, with some additional darker patterns intended for very low light conditions. All the flies had some element of flash or UV treatment to them.  Chartreuse or fluorescent green with clousers would become my go-to fly, along with a white or green poppers.  Leaders were all 30 lbs. saltwater leaders with several spools of 80, 50, 30 and 20 lbs. spools of saltwater mono for tippet.  (Don’t worry about having to be stealthy with fluorocarbon.  Slapping lines and flies seemed to excite the fish rather than spook.)  I had read that Trevally were not in the same league as barracuda and tuna for destroying flies and lines, so all of the above seemed like a reasonable setup.

Clothing was my next issue in planning my fishing pack.  Similar to any other tropical environment, the intensity of the sun-on-water environment can peel paint and fry skin.  I packed my favourite long sleeve rash guards, a couple of hats, and a couple pairs of old wetsuit boots for wading.  I brought light hiking pants and plenty of shorts, as I was not sure which would be more comfortable while wading (there are some small stinging jellyfish roaming these waters.)  I picked up one of those Simms Sungaiters for neck and face protection.  Of course, two pairs of polarized sunglasses would make the cut as well.  I decided to bring my  waist pack to hold all the leaders, tippet, tools, fly boxes etc.  This doesn’t make for practical wading, so I would later wish I had brought a chest pack.  The last clothing items would be a stripping glove along with a couple of those finger sleeves to prevent saltwater abrasion.  Fortunately, most of this clothing was needed for the non-fishing part of the vacation, so I was not really adding much weight to my baggage. 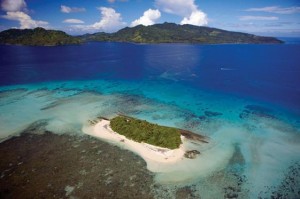 We arrived at Beqa Lagoon Resort around noon on a Saturday.  As the little tinny boat took us from the larger vessel to the beach, I could see small jacks racing out of the way.  I spotted a small bluefin trevally speed away in just a foot of water right near the water’s edge.  They were clearly hunting.  We quickly checked into our “bure” and set up for the week.  We returned poolside to enjoy a relaxing foot massage and scrub where we could see the main western bay next to the resort only 30 feet away.  It didn’t take long to notice that baitfish were jumping in schools throughout the bay, scared out of the water by predators below.  I immediately set up my gear and waded into the edge of the water, immediately catching a small juvenile jack on my first cast.  I could tell this was going to be a fun trip.

Within a couple of minutes of my first fish, two of the resort staff wandered down onto the beach and into the water beside me.  They were both very excited and immediately offered to take me out fishing every afternoon after diving.  They had a 20 foot open runabout that could get us out and over the big bommie coral heads in the lagoon.  Later that afternoon, “Tulaih” and “Gee” took me out to a large coral head where I quickly got into my first giant trevally.  This relatively small 20-30 pounder took off with a speed and power that I have never encountered with any other fish on a fly rod.  Within a couple of seconds, I was staring at a half empty reel.  The guys got the motor going just in time to chase the fish as it got into the 30 yard “danger zone” of remaining backing.  I could tell the fish was about to dive for cover on another coral head, so I quickly pointed the rod and broke it off.  There was little chance of landing the fish with the 10 weight rod and I didn’t want to lose the floating line to the coral head.  Trevally are famous for wrapping lines around coral and destroying the line.  It was only the first day and there was still plenty of territory to explore, so no need to thrash my setup right away.  The guys took me back to the beach, where I concentrated on the smaller bluefin and golden trevally in the shallows.

After that first day experience, I would basically have the same game plan every day: early morning stretch and breakfast, great diving, lunch and full afternoon/evening of fly fishing for trevally, barracuda, gar, dogtooth tuna and mackerel at various beaches and coral heads throughout the lagoon.  This fishery is perfect for exploration, especially for those anglers with a little experience fly fishing for salmon and sea-run cutthroat off beaches here in BC. Given the relatively cheap cost and additional great diving, Fiji made for an incredible trip that I definitely want to repeat.  Many thanks again to Matt Sharp at Pacific Angler and all the staff at Beqa Lagoon Resort, especially avid gear angler and manager Mark. 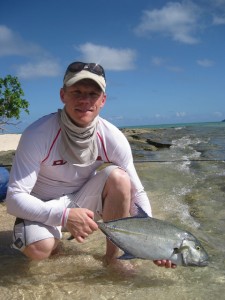 Know Before You Go:

Posted on February 6, 2013 by Jason in Fishing Travel/Adventure