December is the month of the beginning of the winter steelhead season.  Some systems will receive a few late runs of coho and chum but for the most part salmon fishing is done for the year.

Steelhead isn’t the only thing that will pull on the end of your line this time of year.  The cutthroat fishing has started to pick up and should continue to be good well into the spring and through the spring fry emergence.

Vancouver has not had a substantial amount of rain since that big storm came through two weeks ago.  Consequently the rivers have been on the drop and are now low and clear.  This again means using lighter setups.  Those fish will be holding through the troughs of the pools and will be spooky so make sure to walk softly.

There have been few and far reports of fish being caught in the salt over the last month.  Pacific Angler head guide Eddie said that in his experience the first winter springs start showing up at the end of December.  By the time we get into January there should be some good consistent fishing for bright chrome winter springs. 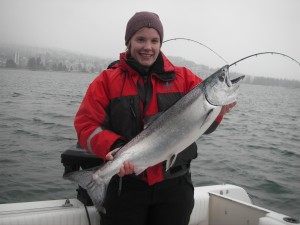 Robin with a chrome winter spring from last season.

We had a great coho season this fall and we hope that will translate into a great steelhead season as well.  There have already been some amazing reports of winter steelhead being caught on the west coast of Vancouver Island as well a few steelhead being caught in the Fraser Valley.  The Vedder River (average over 100,000 juvenile steelhead released each year over the past 5 years) is the top producing steelhead run for us mainlanders.  The peak of the run is not until later in the new year but there are always a few fish caught at this time of year.

If you have always wanted to get into steelhead fishing, we offer a variety of great courses to help you get hooked up.  They are Steelhead Float Fishing, Steelhead on the Fly, and Steelhead Spey Fishing.  Click on the link below to check them out. 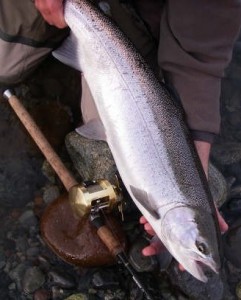 The sturgeon fishing season is over and will not pick up until the water temperatures increase in the spring.  Sturgeon lie dormant in their overwinter holes as their metabolism decreases with the water temperature.  It is best to let these amazing creatures rest over the winter.

The staff has started to hear of some great cutthroat reports in the Fraser Valley.  The Harrison River is one that comes to mind.  Cutthroat tend to travel in schools and move fast so make sure to cover lots of water.  Sloughs, backchannels and typical runs are places where you will find these little jewels. 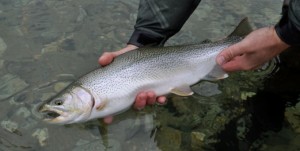 If you are in the mood for exploring Vancouver Island can produce some great fishing for both steelhead and cutthroat.  We’ve also heard some amazing reports down south in Washington on the Olympic Peninsula.  This is an area that the Pacific Angler staff has marked as a must explore for this season.  Something to stay tuned for a later blog post:-)

The interior lakes should all have frozen up by now.  Most interior guys are probably restocking their chironomid, leach, sedge, and dragonfly boxes.  Us mainlanders are fortunate in that it is very rare for the lakes to freeze up.  However, we have not heard of much happening in our local lakes.  We’ll just have to wait for ice-off next spring!

Jason Tonelli of Pacific Angler on BC Outdoors Fish TV

Make sure to check out BC Outdoors Fish TV this weekend.  Jason will be showing how it is done off the mouth of the Capilano for springs.  Last season was an epic return with some pretty impressive results.  Check out the quick teaser below…

Posted on December 9, 2011 by Jason in FIshing Reports