The best description for the recent weather patterns and barometric pressure patterns is YO-YO! It has been up, down and all around. We had a charter last sunday and the forecast was for strong winds in the Gulf Islands and it was flat calm. Same happened in the middle of the week as well.

So, when you are looking at the Gulf, Georgia Basin for weather forecasts, keep in mind that not everything being predicted has been coming true. Be cautious but also be willing to do a last minute check on the Government Marine Forecast even the morning before you go to see what is going on. The weather looks great for the weekend!

Once again, the barometric pressure in the interior looks to be balancing out from sunday on to early next week and we are hoping that this will produce better fishing than has been had recently.

When you are planning your fishing trip and wondering where to go, remember you can head west as well as east!  Take a nice drive up the sea-to-sky corridor and fish the lakes found on the way or up in Whistler and even up in Pemberton. Alta Lake, Green Lake, Ivey Lake and soon you will hear more about the Birkenhead river getting into shape and fishing well!

The most recent reports Andre, Bryce and others have been getting is that fishing has been tough. With the temperatures and weather patterns all over the place the fishing has yet to truly produce as you would expect.  At tthe same time, if you are able to wait out some of these crazy weather patterns and be on the water when the clouds break and conditions shape up fishing can be great!

Remember to browse some of the online forums. You will find useful information in the forums at flyfishbc including their stillwater section. Flybc.ca is another great forum to check in on to see what people are sharing and talking about.

Let’s keep the fly box open on the seat next to us, for a few reasons. The last seven days in the interior have been a massive mixed bag of barometric pressure and South West and North West winds, with even solid Westerlies for more than an afternoon.

This makes things difficult, difficult for anglers that aren’t willing to stick out the entire day waiting for a blitz. A few nice days in between triggered some multiple fish anchor sessions, for those who were lucky to be around mid week.

I am writing this report within a roll cast of a notorious big fish lake, at 3500 feet. I am incredibly fortunate enough to have the opportunity to monitor close to a dozen lakes ranging from 2850 to 4800 feet. The story has been fairly similar throughout the range, as no steady warm system has blessed us for a few weeks. As far as surface temperatures go, 57 to 58 have been the mid day trend, with odd variances depending on the evening skies throughout the following nights. 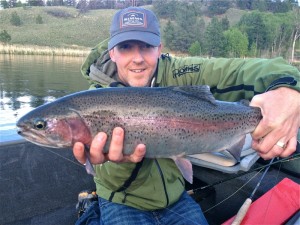 That’s how to take a fish pic!

One thing is for sure, when the winds drop and the sun pops, so does everything else. The Chironomid emergences have still been about half of the normal flow. The bombers are showing above the heavier mud bottom sections, marking the later half of the entire spring trend. Damsel Nymphs have finally started to invade the oar locks, anchor lines, picnic tables and reeds / bull rushes. Next on the waiting list are the jumbo Darner Dragonfly Nymph tracks, swerving and marking the shoals on their way to shore. Capitalizing on the moment, unfortunately gets us through the last few days and what looks like (by the forecast) the next few more. Large Bead Head Leeches in Maroons dubbed over Blacks, or vice versa have made tippets tight as of lately. Fast stripping #8 to #10 pregnant baggy shrimp off a type 6 sinking line directly parallel with the shoal have also caused mild finger slices. I am a firm believer in bigger than normal bugs during cranky conditions. Fast stripping unorthodox bugs is cool, especially when the spring weather is. 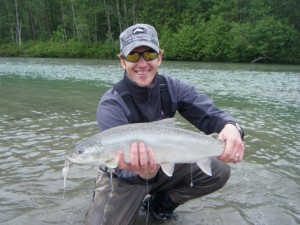 BOOK US NOW!!  This is the time of year to head up for a remote, fly or gear fishing adventure that is on the bucket lists of people all over the world, not just locally!  The Upper Pitt River is where Matt will be guiding 2-3x per week until mid-august.  This trip is simply amazing from the scenery while running the river in a jet boat to walking and swinging flies through the runs or tossing spoons for big bull trout or searching out side channels holding fish, the whole day is full of adventure and photographic moments to keep forever.

Sturgeon fishing on the Fraser has been challenging lately with the high water conditions. The last few trips have only produced a handful of fish per day. We have primarily been targeting the areas between Mission and Fort Langley with the mission being the most productive.

We have been fishing close to shore and behind log booms to get out of the fast current and debris. Baits of choice have been eulachons and eels fished on short leaders to keep the bait on the bottom. The Fraser river water levels have started to drop and will continue to recede until the second to third week in July and the fishing will really start to pick up. On a side note we have seen many chinook salmon porpoising in the lower river so if this is any indication of returning springs it could be another banner year for chinook salmon!

The capilano river has been producing fish while the majority of the coho are stacked up in the cable pool.  It should be within the next couple weeks when you will begin to see fish stacking up out front of the cap and along W. Vancouver.

The Chilliwack river opens July 1st for chinook and the Fraser will open in mid-july as well.  Please check in with our friend Rod’s fishing reports on his site Fishing with Rod for other relevant and up to date options for your local fishing! 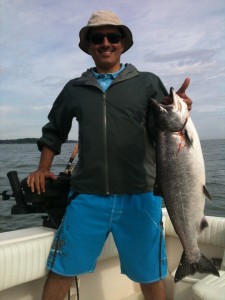 Not much has changed across at Thrasher except a couple of things. Still getting a mix of great calm days and a few windy days (like yesterday). Still getting those nice mid teens but a few more bigger fish are now coming back with us as dinner guests. The Silva Bay Derby produced a 33lb winning fish but that wasn’t the only one around that size. Quite a good number well into the 20″s as well. Some guys did pretty well offshore but the fish were also found in tighter to shore. Thrasher Rock, and a  few other spots nearby were also producing such as off the Waterfall, The Grande and Entrance. Lots of Cohos there too!

I have been primarily using Hoochies and spoons with this weeks favourite for me the “Homeland Security” in the 4″ size. The “Kitchen Sink” was also a good bet. I also had an old discoloured tattered double Glo “Spackle Back” that got me a few nice fish too. The fish are all over the place in terms of depth. One boat tagged one of his 2 Tyees at 35′ when he was resetting his gear! A few guys have been using bait successfully.  It’s good to focus from about 180″ up with say 110′-120′ being a baseline. 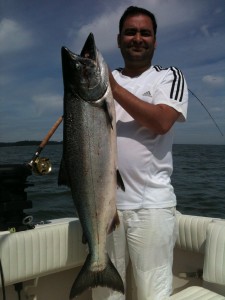 Strangely enough, the reports of halibut have dried up for the moment. I mentioned the wind yesterday. I had a 5hr trip but a ten hour trip across the Georgia Straight would not have been possible with the 18-20 kph winds straight out of the west. Fortunately I managed to get us to just inside Point Atkinson to some fishable water where I hoped to intercept some of the cohos that should be there by now. I was all alone out there and as I was instructing the guest on how to work the single action reel we had a couple of good shakes that didn’t stick. We ended up with 3 hits and a small wild coho that we released. I ran 2 different spoons and 2 different hoochies and they all worked but they liked the small 3″ green glo “Coho Killer” best.  All depths worked from 60′ to 27′ and from just west of Cypress Creek, in front of  the creek and also in front of fisheries. The tide was an 11′ drop followed by a 10′ flood which gave us a pretty quick bite window.

Fishing should get much better as the strong tides mellow out a bit. At least now I know they’re there and soon we’ll have a decent option to fish when it’s not possible to cross the Georgia Straight (yeah!). Crabbing was still pretty good except I found a few commercial floats in my favourite spot when I came back to retrieve my traps. I expect the number of big keepers to start dropping within the next couple of weeks.

From all of the staff at Pacific Angler we look forward to continue to be “Vancouver’s Store for the Fishing Enthusiast”.

Posted on June 21, 2013 by Jason in FIshing Reports, Uncategorised