Local Vancouver weather looks great on the weekend, sun and some clouds so it is a great weekend to get out and explore the city, lakes or come in and say hi at the shop!

If you are heading up to the Merritt/Kamloops area this weekend it is shaping up to great fishing if we only relied on the baramoter!  It is looking nice and steady with sun/cloud in the forecast and lows of 10, highs of 22 from today till monday!

If you are looking to go yourself or maybe take the kids out on a fishing adventure locally, Gofishbc continues to publish BC Fish Stocking Reports to help guide you where you will have the best chance at success.  We encourage you to check out local reports but also reports for other watershed regions like Thompson-Nicola.  Remember to check out historical data as well to narrow down the lakes that may have a HOG waiting for your line!

We have heard great reports about fishing at Roche, Peterhope, Salmon, Hatheume

BC Brothers still water report: The lakes are in they’re form now with the progression of may flies and early caddis hatches in lower lakes that provide them. Upper elevations 4000ft plus are done their turn over and are on the chironomids. With the spotty weather all May the season is a little behind schedule and the progression of the temperature rise has been steady. All aeas are fishing well. Get out there!!

Don’t be afraid to try things like May flies or Caddis in bigger depths than usual. Big fish are there to be had in lakes like Sheridan, Valentine, Courtney, Pass, Scuitto, Fred, Palmer, Gustufsonn, Island, Peterhope and Howard Lk.

Kane Valley: Fishing has continued to be strong in the valley here with our friend Dale doing well on chironomids on Englishman with fish to about 4lbs.  LK continues to be a tougher lake to have success on however, the persistent will be rewarded with strong fish and the chance to land one 25″+! 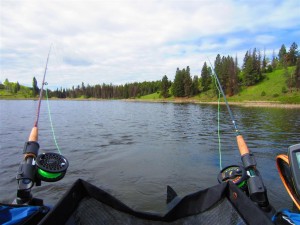 Capilano:  The Coho have arrived and from all indications it looks like we are going to have a solid season. Reports are streaming in from both fly and gear anglers and we have had some interesting reports from the saltwater that might play a role in the river fishery.

In the last few charters our guides have been running into pods of Capilano coho on the other side of the strait. This is something we have not seen before and though we do not have enough information to make wild assumptions it could mean a shift in feeding cycles or possibly just larger numbers moving through the strait.

Andre hit the river on Monday and Tuesday and found fish all day and had many more follows. For the fly there is only one way to successfully fish the upper pools. You will need a full sink line type 6 or 7. I have never seen anyone have success with anything lighter (floating or sink tip) We have the best deep lines in stock. Andre has been pumping out his custom Cap Bugger and all of his fish came on this fly.

For gear, roe is in short supply across the lower mainland – no shops have it! If you have stock piled some roe use it! If not the best second choice is died krill fished under a float or bottom bounced. We have krill in stock.

The boys at the hatchery were working hard this last couple days and we want to give a big thanks to both the hatchery workers and the Saltwater Guide Association for the chinook release program. Keep up the good work!

For comprehensive fishing reports on local rivers at this time please visit our friend Fishing with Rod and see the tips he has to offer!

Cast on this link to read the LIVE 24/7 report: http://www.noelgyger.ca/current-fishing-reports.htm 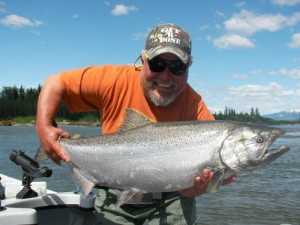 Report: Jason Tonelli: Fishing continues to be good to excellent from Thrasher Rock up to Nanaimo.  There is a mix of fish inshore and offshore so you can literally hit fish in 120 feet of water to 800 feet of water.  The best lures are spatter back glow hootchies, and your favourite spoon with a little glow in it, like Green/Glow or Kitchen Sink.  Flashers that have been working include, glow, double glow, Green Onion, and Purple Onion.  Best depths have been from 90 to 180 but yesterday 127 to 150 was very productive for us.  We put 5 nice chinook in the box, lost a few more, had some more hits, lots of undersize, and even a few coho.  It was a very active day! 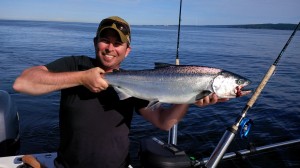 Bryce with a nice chinook!

Crabbing is also excellent in the harbour.  Speaking of the harbour, we have heard of a few chinook and coho being taken along W. Van.  The Capilano already has good numbers of coho in the river.  The river guys are having some great fishing already and once Thrasher slows down many boats will start fishing W. Van for the coho.  This usually happens around July 1st but we can have excellent coho fishing off W. Van any day now, so time to start heading that direction.

Eddie Matthei: Weather has still been a factor. Last Sunday blew hard from the Northwest and we were unable to get across. Even the boats already over there stayed tied to the dock. I got out since then and got back to catching fish. 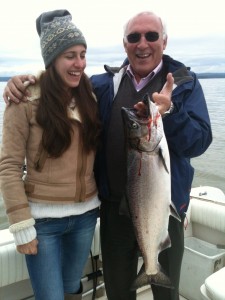 Finally on Tuesday we were blessed with flat calm water but other than a fairly quick morning bite in which Jason and I both hooked double headers the bite died and the rest of the day was slow. I guess sometimes you can’t have it all.

Most fish have been hitting from 90′-140′ with a few nice fish that I picked off down at 180′. Both hoochies and spoons are working and it seems to be whatever they’re in the mood for.The only prototype Ricker Double Glo spoon that Jason and I have been testing has already hooked a few nice fish for us. I hope I don;t lose the only one I have. 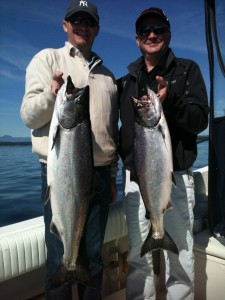 Killer whales paid us a visit on Tuesday. They rolled into a spot another guide and myself were working and we both had fish on. We were fighting fish and whale watching at the same time! Although it was a smaller pod which indicates transient Killer whales as opposed to resident Killer whales which are fish eaters, I was still concerned about losing our fish since the whales were only a couple of hundred yards away. Later I spoke with the Captain of Vancouver Whale Watching and he informed me that the transient whales do not hunt fish and are silent hunters for mammals. They don’t use echo location which is why they didn’t spook our fish and we were able to hook them with whales present. I hope they took care of a pesky sea lion that had been shadowing my gear and spooking my fish earlier that morning.

From all of the staff at Pacific Angler we look forward to continue to be “Vancouver’s Store for the Fishing Enthusiast”.

Posted on June 7, 2013 by Jason in Uncategorised