This weekend looks like we will get some of that rain that we need to bump up river levels.  The fishing has now rounded that corner on most the rivers where the “end” to the epic fishing of 2013 is coming to a close for those of you chasing salmon.

The 14day Squamish Weather Forecast is looking good with a mixed bag this weekend and then some sun again next week.  The Vancouver Forecast is very similar and it looks like on Monday even Vancouver will potentially get a slight flurry of snow!

Winter chinook will soon be cruising the Vancouver Harbor and we will be out there chasing them!  We are getting excited about how close we are to opening this fishery up to charters again this year!

We can tell you that the prawning and crabbing has been fantastic this fall and will continue to be great straight through the winter.  When we do our winter chinook charters you will also get to load up on BC spot prawns and crabs!

December 1st is on this weekend, Christmas keeps getting closer and closer!  The PA store is decorated from inside to the outside!  Asami, a local college student has started painting a couple of our windows for some festive cheer! 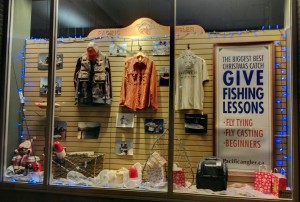 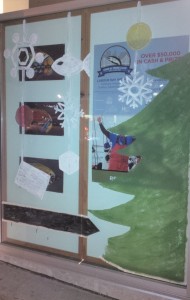 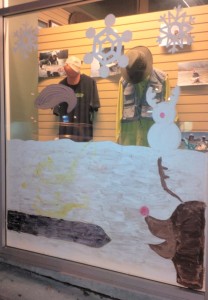 Our friends over at F3T Films have great night coming up on Thursday, Dec 5th at the Norman Rothstein Theatre in Vancouver.  You can purchase tickets online or at Pacific Angler and you can view trailers of the films being shown!  All proceeds are being donated back to the theatre and to the BC Steelhead Society!  It promises to be a great night all around and benefiting some great causes. 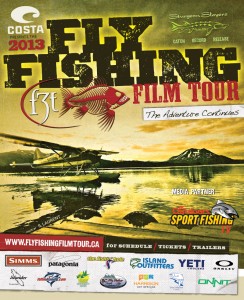 With winter approaching and the lore of sunny, warm beaches seemingly more and more tempting, one will quickly start to find themselves looking for an escape from our west coast rains and snow, if only for a week or so.

Since warmer waters and tropical destinations can come at a steep price- especially during the high season- it’s refreshing to see Sage offer a rod with all the quality and components they’re known for at a very reasonable and affordable price- leaving a few extra coins to tip your waiter as they hand you your Mai-Tai after a day on the water. 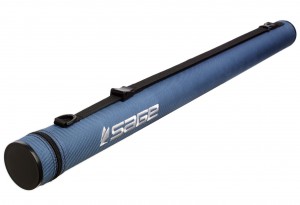 Retailing for $425, the Sage Motive comes in what they refer to as “Bluefin blue” which I find extremely attractive and very well themed for saltwater fly fishing.

This “Bluefin blue” is a powdery matte colour that isn’t too shiny- something I find important, especially when fishing shallow waters where the slightest glint from a reflective surface can spook a fish. Though this might sound a little obsessive, anyone who has fished the salt can attest that some species of fish will follow the fly right to the rod tip before striking.  With the rod tip being only 10 or so feet away from the body, anything that can put a fish down or turn it away should be avoided, including shiny objects that have a tendency to reflect the sun or things with a high gloss. 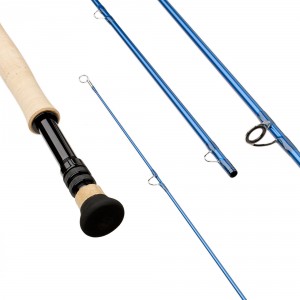 It is built with the time-proven materials and technologies that compliment Sage’s well-known saltwater experience. Features include over-sized guides that help the often heavier and bigger headed lines associated with the salt fly through, a full wells cork grip, a fighting butt, and the anodized aluminum reel seat coupled with saltwater compatible components often associated with more expensive rods round out the features.

The Motive features a blank that is powerful but smooth, making this a fast action rod that loads quickly to help toss heavy saltwater flies with the accuracy sometimes demanded by finicky fish. It is light and responsive, giving you a ton of feel and keeping you connected to your line for high sensitivity and control- all things that make a full day of casting enjoyable.

For anyone planning on going somewhere warm this winter and you want a rod that will handle the rigors and demands of tropical saltwater fly fishing but won’t break the bank, the Sage Motive will help make that dreamed-of bonefish trip more affordable.

From tarpon in the Florida Keys, monster bonefish of Hawaii’s famed Kaneohe Bay, and powerful snook from Mexico and North Carolina are all new reachable targets thanks to the affordable Sage Motive.

The Squamish is low, low, low.  However, Ryan was on a guided trip yesterday and they did get into some coho, including two bright ones.  Nymphing egg patterns has also been producing good numbers of Dolly Varden but it has slowed down somewhat due to the extended cold, low water conditions.  December 1st will typically be the bitter end of the salmon season and most anglers will then start concentrating on the Dolly Varden. 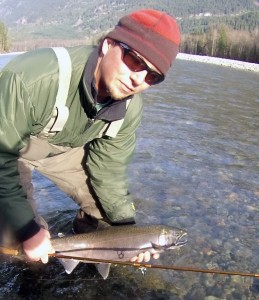 When we finally get a rain and the rivers comes up, more salmon eggs will get stirred up and the Dolly Varden will go on the feed with reckless abandon.  So keep a keen eye on the weather and look for things to pick up when the river gets a bump of rain. 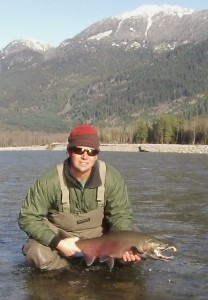 As for steelhead, there won’t be much to report on the Squamish for sometime.  The first steelhead don’t really trickle in until February at the earliest, so you are best to head to the Chilliwack/Vedder if you have steelhead on the brain.

The Cheakamus is much the same as the Squamish at this point.  Very low and clear. There have been some decent days nymphing egg patterns for Dolly Varden.  Once we get some rain and the river comes up, it will definitely pick up as more chum and coho eggs get washed around. 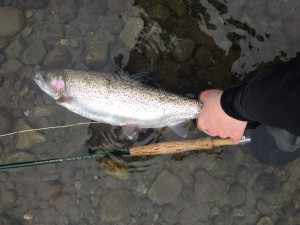 The odd lonely steelhead might show up in January, but again, if you are looking for steelhead, go the Chilliwack/Vedder or jump on the ferry and go to the Stamp in Port Alberni.

The first steelhead of the year have been officially reported!  We actually heard of some fish last week but now there are some pictures of fish that have been kept. (one hatchery steelhead per day).  This time of year the steelhead are definitely keyed in on single eggs. We just received another order of Trout Beads so come in and stock up while supplies last.

In the past when I use to fish the Vedder a lot, I kept my fair share of hatchery steelhead in December and January.  You would be surprised at how many fish have single salmon eggs in their stomach.  With the low and clear water I would suggest 15LB Seaguar Fluorocarbon leader and a single rubber egg with a bit of white or peach wool, or a roe bag. 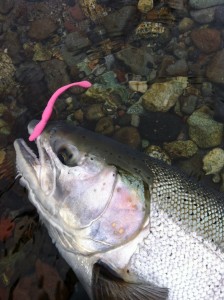 Another good tactic is to use a rubber worm.  This is a what we call a reaction bait.  The steelhead is going to grab it on your first couple of casts or quite simply get out of the way.  You can get “pink worms” in different sizes and colors.  The 4 inch models in peach or washed out colors like light pink, or even natural colors like brown, work well when the water is clear.

When the water is green, bubble gum or fluorescent pink in 4 inch or 6 inch work well.  When the water is dirty, go big or go home and put on the hot pink 6 or 7 inch worm and hang on! So put on a “pink worm” and cover a lot of water and try and find a fish, and that, at this time of year, is the name of the game.

The salmon fishing is pretty much done on the Fraser.  The latest of the late chum and coho are swimming around, but the bulk of the fish have passed through and most anglers are turning their attention to steelhead or sturgeon fishing.  The last of the die hard coho fly anglers are still catching some fish on the sloughs in the Harrison area, but even this fishery will taper off in the next week.  Sturgeon fishing is also slowing down a bit as the water temperatures drop as winter starts to grab hold.  You can catch sturgeon all winter long but the fight of the fish is greatly diminished due to the cold water temperatures.  We aren’t quite there yet, so if you want to go pull on some big dinosaurs, get out there before the water gets really cold and get your sturgeon fix.

Spectacular would be the way I would describe the fishing conditions last week. The high pressure system has kept most of the wind and clouds away making for some calm waters and sunny skies. Although a few boats have been out enjoying these conditions I still haven’t heard any more significant reports. It is still fairly early for our winter fishery and I look forward to some conditions like this when the fish do arrive in significant numbers. I feel like my kids counting  the days to Christmas but in my case it’s to go fishing!

Spoons would be the weapons of choice with some of my favorites being the Coyotes Green Glo, Ghost Rider, Cop Car, Kitchen Sink, Nasty Boy, Army Truck in the 3-4″ and Gibbs and Gypsea spoons like the Green Glo, Cop Car, Flaming Hans in the 3″ to 3.5″ just to name a few. In terms of flashers chartreuse, green, red, purple onion, Etc. 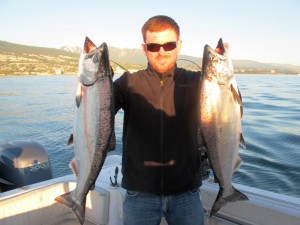 It’s best to keep switching it up and the fish will tell you what they want. As you troll along look for signs of bait on the sounder and keep your eyes out for seals. They are a good indicator there’s fish around but keep quiet when you hook up and you may sneak your fish past them. I am starting to get a few bookings and look forward to being on the water soon. In the mean time the boats are getting some attention in preparation for this next fishery and I look forward to having the rods bouncing soon!

We will be releasing the 2014 Pacific Angler Course Schedule in next week and we plan on adding new courses to the program!

Posted on November 29, 2013 by Jason in Uncategorised