September is Here! We had an awesome August and with rivers hitting perfect levels, lake country cooling off, Fraser salmon moving through the bay and the Skeena reporting amazing numbers we are looking forward to the fishing this month.

Last weekend we hosted the first annual Labor Day Chinook Classic and the event was a huge successes. We will admit that after day one we were thinking about re naming the weekend the Labor Day Chinook Challenge because 30 minuets before the opening gunshot a pod of killer whales moved through the harbor. All experienced fisherman know what that means. Though a few fish were hooked we did not have a legal fish entered after the first day of competition. In hindsight this made the second day even more exciting.   Technically everyone was tied for first and with over $30,000 on the line the pressure was on. On day two the fishing picked up and we weighed in a number of nice fish. The winning fish was 21.6lbs caught by the boat Slab Addict off the T-10 but we have to give an honorable mention to Johny Beer who was not entered in the derby but managed to hook a 48lb fish off the north Arm! In the name of conservation he landed, taped, photographed, and then released this monster. Awesome job John! Next year we will see you in the derby. 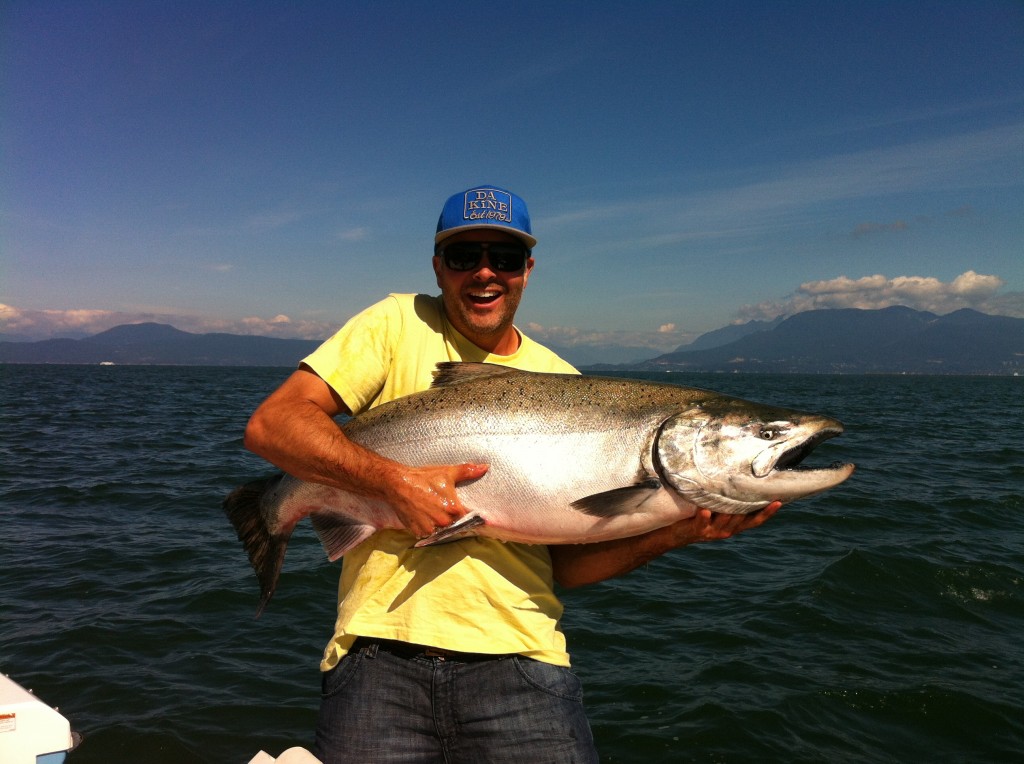 The fishing after the derby picked up and though it has not been hot, a few fish have been coming off the mouth of the Fraser, T-10 and Bell Buoy. A nice bump of springs moved past the Capalino area and fishing for both Coho and springs has been good.

For today and tomorrow the weather is going to get hot again with temps hitting the 25 degree mark. On Sunday we might see some rain. This is a good thing for the Vedder and a few other rivers that are getting very low. For the rest of the week things are going to cool off with temps in the high teens. This should help cool down the interior lakes and we expect reports to start coming in any time now.  Vancouver weather forecast

Trout river fishing is still good in the Hope / Thompson area and we have heard some great reports of dry fly fishing on the Thompson with orange Stimulators.

Beach fishing is still solid and this weekend has great tides. Check out Andre’s update below.

The Fraser River is fishing well for Chinook and Sturgeon. There is a salmon fishing bait ban above Mission Bridge to protect the interior Coho but you can still use bait for sturgeon. The Chinook fishing should be good until they close it around the middle of October and sturgeon will only get better as more “bait” (salmon) hit the river.

Though it is still early we expect Coho to start showing up in the Chillliwack/Vedder River soon. We need water. The river is very low and not fishing well but the first big rain of September will kick off the fishing and waves of coho will keep coming with every surge of water until middle to end of November.

For a detailed look into the local river scene read Dimitri Roussandis’s river fishing report below: 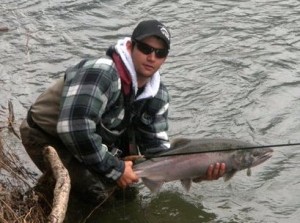 Chilliwack River: It’s September finally. The mornings are chilly and the fish are here, with many more to come. The fall Chinooks as well as coho salmon are showing up. As we get farther into the month the fishing will only get better. Jack Spings are in the system already, and some adults have been caught. As of this past weekend there are already some coho in the hatchery, and spread through out the river. The numbers are not yet high but that will change with the next rain.

Chehalis River: The Chehalis is still at a low and clear level, there isn’t much happening this past week. There will be some opportunity once the rains start.

Fraser River:  The Fraser has been consistent for Chinooks. There are still red Chinooks migrating, and the white springs are being caught more consistently now. Sturgeon fishing has been good this week, the fish are stuffing their faces and they will be big and fat come the end of the fall. 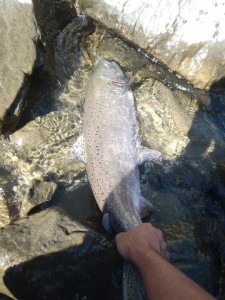 Squamish River: The Squamish River has dropped down to fishable levels, but with the hot days of early fall, it continues to run glacial colors. Some coho will trickle into the system this time of the year, but the main push won’t show themselves until October. All wild fish are catch-and-release, and there is a strict bait ban on the river and its tributaries at all times.

Capilano River: The ‘Cap’ is low. Until the rains come, there won’t be much opportunity for fishing. There is a bait ban on the capilano in the fall, until November 1st.

Thompson River: The Thompson has been dropping fast the last couple weeks. Fishing for jack Chinook has been good this last week. Fewer adults are coming through now, but there will be a run of fish until the last weeks of September. Trout fishing has been great. They have been destroying dry flies consistently, all week. Elk hair caddis’ and burnt orange stimulators have been the ticket.

Skagit River: The Skagit has pumped out lots of fish lately. Fishing Adams and nymphs has been best but we heard a good report using stimulators present all week, and the more than eager bull trout are lurking as always. The river is finally low enough to wade just about anywhere, and the further you go, the better the fishing seems to get. Come by the shop and ask the guys for some advice on some flies, tackle, and techniques.

The sunny weather has brought in the NW winds so most of the boats the last few days have been fishing the mouth of the Cap or the Bell Buoy.

There have been a few springs taken off the Cap Mouth, but not a lot.  There are already lots of boats there, too many really for the amount of fish being taken.  I would consider the fishing slow for now, but expect it to pick up late next week when the big push of fish showed up last year.  For those of you heading to the Cap this weekend to look for a few early ones, try herring or anchovy in a glow, glow green, bloody nose, or glow blue/green teaser head.  A 6 foot leader of 30lb attached to your favorite flasher, find the bottom, bring it up a few feet, and cover some water.

The extremely low Capilano River has also kept the coho fishing fairly decent.  There are still good numbers of coho stacked up off W. Van up on the flats in 20-40 feet of water.  Most anglers are using anchovies in the setup described above.  Again, find bottom and bring up around 5 feet.  You will see lots of fish jumping but those aren’t necessarily the biting fish.  These fish do go on and off the bite, so try and be there for first light, last light, or the tide change for your best chance at these finicky, staging coho.

There have been about as many if not more chinook hooked at the Bell Buoy as the Cap Mouth the past few days.  On both the ebb and the flood tide, there have been some good fish hooked.

The 50’s and 60’s have been good depths in 80-120 feet of water.  The same setup as described above is good.   Spoons are also working, like the Green Glow, and Irish Cream.  There have also been some fish hooked on hootchies, glow Army Truck and Blood & Bones, have produced a few.

Not too many boats made it down to the T-10 or South Arm the past few days due to the NW wind in excess of 15 knots in most cases.  However, if the wind backs off, I would make a run down to these areas in search of chinook and some hatchery coho.  The Chilliwack/Vedder gets a huge run of white springs, as does the Harrison, and all these fish pass by the South Arm and many get pushed up to the T-10, North Arm, and sometimes Bell Buoy.  You also start to see good numbers of coho this time of year and you can retain hatchery coho that are destined for the different rivers of the Lower Mainland, primarily the Chilliwack/Vedder.  Remember to treat wild coho with care as DFO is currently concerned with Interior Fraser River coho stocks at this time.  If it has an adipose fin, keep out of the net and shake it off with the gaff.

So in summary there will be a few springs this weekend off the Cap Mouth, but it is still a bit early.  There are some coho on W. Van, but they are a bit picky.  Decent chinook fishing off the Bell Buoy, and if the winds aren’t too bad head S down to T-10 or South Arm for a chance a some big chinook and hatchery coho.

For more reports check out the Guide Journal at www.vancouversalmonfishing.ca

From this Friday the low tides will be start at dawn again which means the beach fishing will be great for the next few days. At this time of the year the you will encounter bigger cohos which might be from different river systems than Capilano but are milling around there before they go up there native river. Use  small and sparce flies with white and orange in it but still change patterns once in a while. This fishery will continue for at least another month. Don’t forget that even if the low tide is in the afternoon but it is cloudy you still have a very good chance to hook up with these fish.

Finally thingshave started to cool down.  We are still waiting for the first September Lake reports. But with the temperatures dropping it will be any time now and we know of a number of friends heading to lake country to have a poke around – we should have information soon. During September and into October the fish will start pushing hard to fatten up for winter. This time of year is awesome because fish forget about being picky and will travel into areas of the lake that they didn’t bother before. Look to the shallows and make sure to have water boatman and booby imitations in your fly box. Fish the boatman on an intermediate line and the boobies on a heavy full sink. Leeches and Dragons are another great bet in the shallows as soon as it cools.

The staff at Pacific Angler hope you enjoyed this report.  If you have any questions about our fishing reports please do not hesitate to drop by our store at 78 East Broadway or give us a call at 604-872-2204.

Posted on September 7, 2012 by Jason in FIshing Reports