Welcome to August! The weather this weekend could be better for those not into fishing but with a mix of sun and cloud and even some rain we’re hoping it will be good for fishing.

We had a flurry of activity on the West Van shoreline this week and we expect it to get good over the next 10 days. Check out the saltwater report, Andre’s beach report and the Capilano river report for more details.

On the Skagit River we are still hearing great reports and water levels continue to drop. We have some great pictures in the report this week from the river. The Vedder and Chehalis have seen some net pressure and reports have been mixed from those rivers. Let us know how it is if you head out over the weekend.

The Fraser is open and we will be doing a detailed bar fishing report next week. Some days have been hot and others slow but we are happy to hear that most people are not bottom bouncing and using proper selective fishing methods.  Please continue to do this so they do not close the fishery.

While it is still warm throughout the interior there are still some options for the lake fisherman, have a read of Max’s report below.

Good Luck out there and have a great weekend!

We’re just over two weeks away from the derby but there is still time to register!    For only $300 per registered angler you can spend the weekend on the water and land the winning fish!

Aside from the chance at $15,000 for reeling in the winning fish registration includes a hot fisherman’s breakfast each morning, moorage at Pier 73 Marina and Yacht Club, Saturday evening dinner and an afternoon BBQ awards ceremony on Sunday.   All that plus some amazing prizes!

Check out all of the details for this year’s tournament and download your registration form here!

This course was specifically designed to give the new fly fisher the basic knowledge, casting skills and fly fishing strategies to effectively fish our local BC waters. This course is comprised of two sessions; 3hr evening seminar and a 3hr casting session. The dates below show the seminar date first and casting date second. 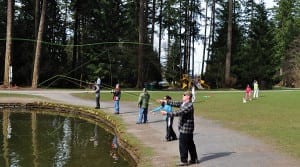 We had some solid reports from the saltwater fleet over the last 2 days.  This is good news for the entire North Shore fishery but until we see some rain this will not affect the coho fishing in the actual river. River levels are very low right now and will not change for the weekend.  There may be a bit of rain Sunday and early next week so that may help out a bit. We would recommend focusing on the beach when faced with low water conditions so check out Andre’s beach fishing report.

If you are set on fishing the river, using flies are much more effective than larger gear. Go early or late when the light is not on the water and the fish are less spooky.

Not much to report from the Vedder this week as fishing has been slow. That said the odd fish is getting caught. We don’t expect many fish will be moving through the river as it is very low.  Generally speaking the lower the water level is the lower you want to fish in the river system.  The odd pod of fish may still push through the river into mid August. Bait is great for chinooks in the freshwater as they become very scent oriented, roe is king. We have had reports of anglers catching sockeye moving through the system. Reminder there is no retention on the sockeye so be sure you release them unharmed.

A number of loyal friends and customers have been feeding us reports from the Skagit. From most accounts the dry fly fishing is getting better but the hatches are not coming in full force yet. This could change any day. Hatches usually continue to intensify all the way into September. 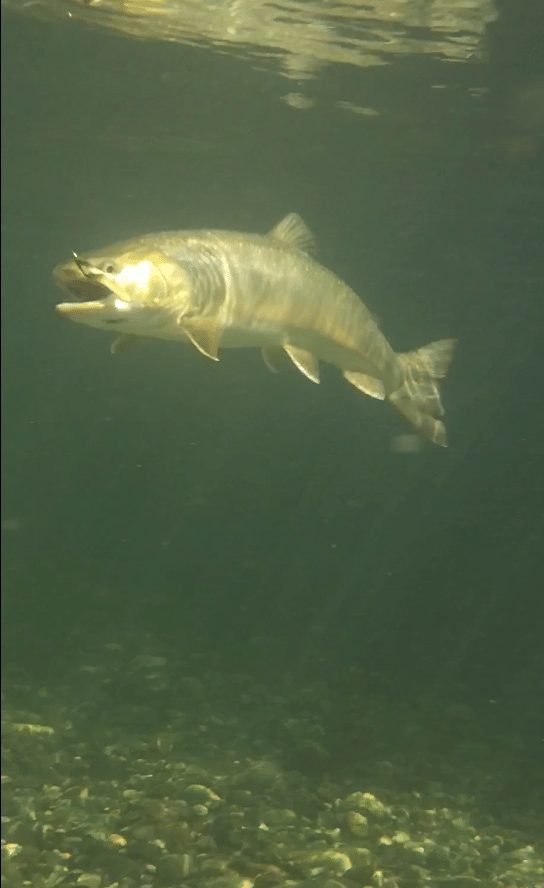 From the reports, small grey mayflies are still the go to if you are set on dry fly fishing but most anglers are going prepared with nymphing rigs and streamers. Check out last weeks report for more details on how I set up my rigs and more details on flies. 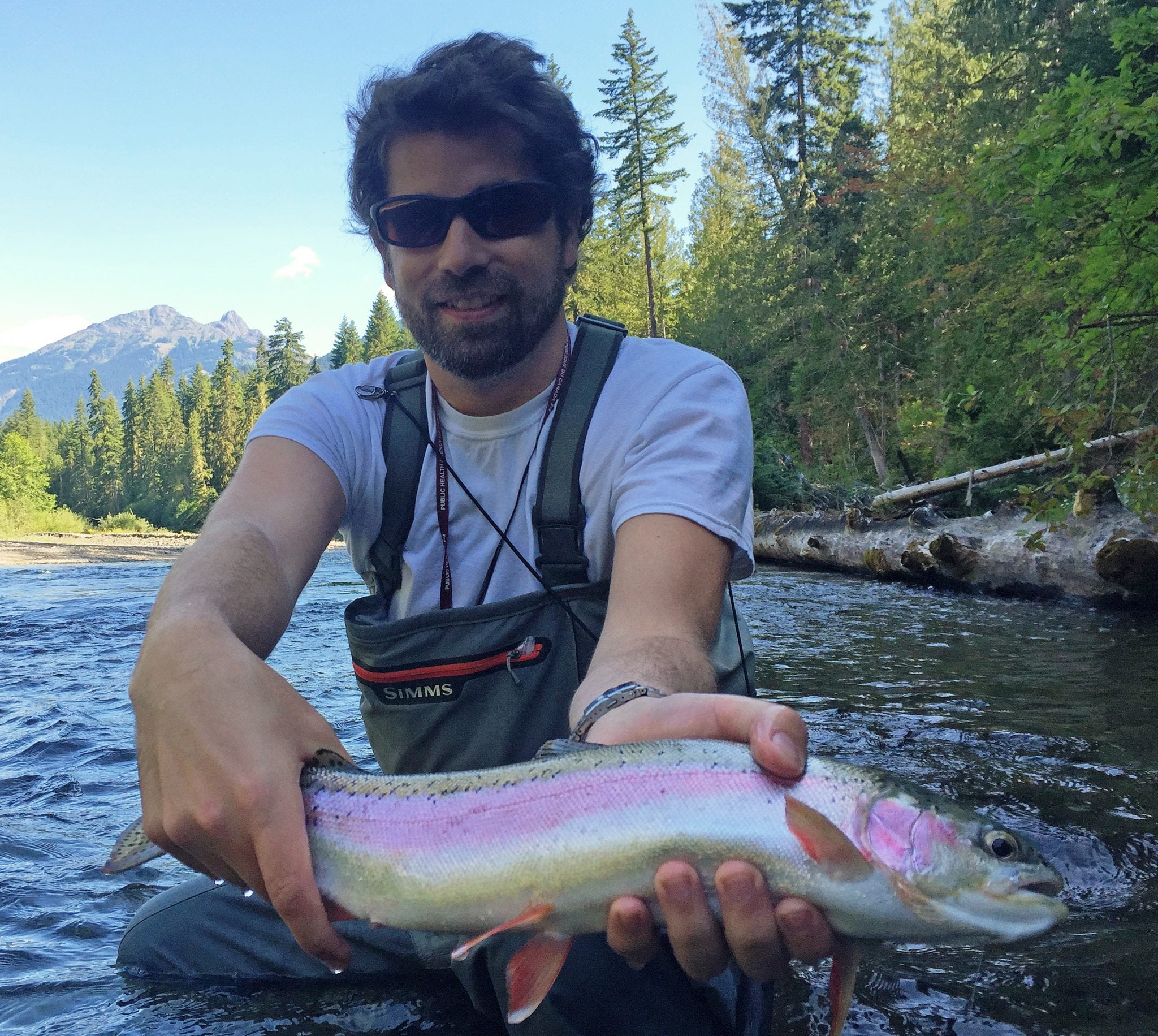 One of the larger rainbow trouts we’ve seen on the Skagit this year.

We had reports of some smaller green mayflies coming off and there were a few sightings of larger green drakes but nothing in any volume. Make sure you have some of these in the box moving forward.

Most of the lakes in the Interior will be in the mid 60s to low 70s by this time. When the water temperature is that warm, fishing is generally not red hot. While there won’t be many insect emergences, fish can still be caught on a variety of methods.

Suspending blood worm patterns close to the bottom can be very effective during the late summer. Full sinking lines are very useful at this time; allowing you to fish your patterns deep. Dragonfly nymphs, leeches, scuds and bloodworms are all good patterns to have in your box at this time.

You may also encounter a “bomber” hatch. Large chironomid pupa called “bombers” emerge in the late summer in some interior lakes such as Tunkwa and Leighton. This can be a very exciting and fast paced fishery.

We have heard a few reports of bomber hatches in Tunkwa recently.

I went to check out the beach this past holiday Monday and there were more fishermen than fish. There were reports of one or two getting caught on gear but other than that things are quiet. I can come up with a few theories as to why the fish are not there in numbers but we will never be 100% right so lets hope the coho show up sooner than later and we can spend our time fishing rather than theorizing. There are a few fishermen that fish everyday on the beach starting in June and they have only hooked 5 to date. We have to be hopeful and remember again any day this could change and next thing you know there are hundreds of coho jumping and fining in the estuary. The results of fisheries are never fully revealed until the end of the season.

If you’re planning on heading out to try your luck the tides are not in the favour for the fly fishermen until August 13th, if you fish gear then off the jetty or around it is still possible. I hope to have a more positive report for next week.

This past week we saw some decent coho fishing off West Vancouver but it has been hot and cold.   As usual the best fishing for coho has been early in the morning before it gets too sunny. 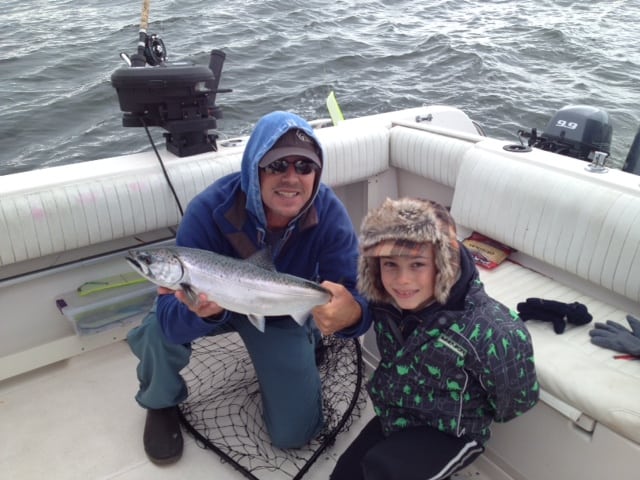 Aiden and his first chinook released at Point Atkinson with Captain Eddie.

There has been some chinook off the Bell, T 10 and Sandheads but nothing consistent as of yet.  The best depths for these chinook is 30 – 80 on the rigggers and as usual bait is best in glow teaser heads with glow flashers like the Salty Dawg. 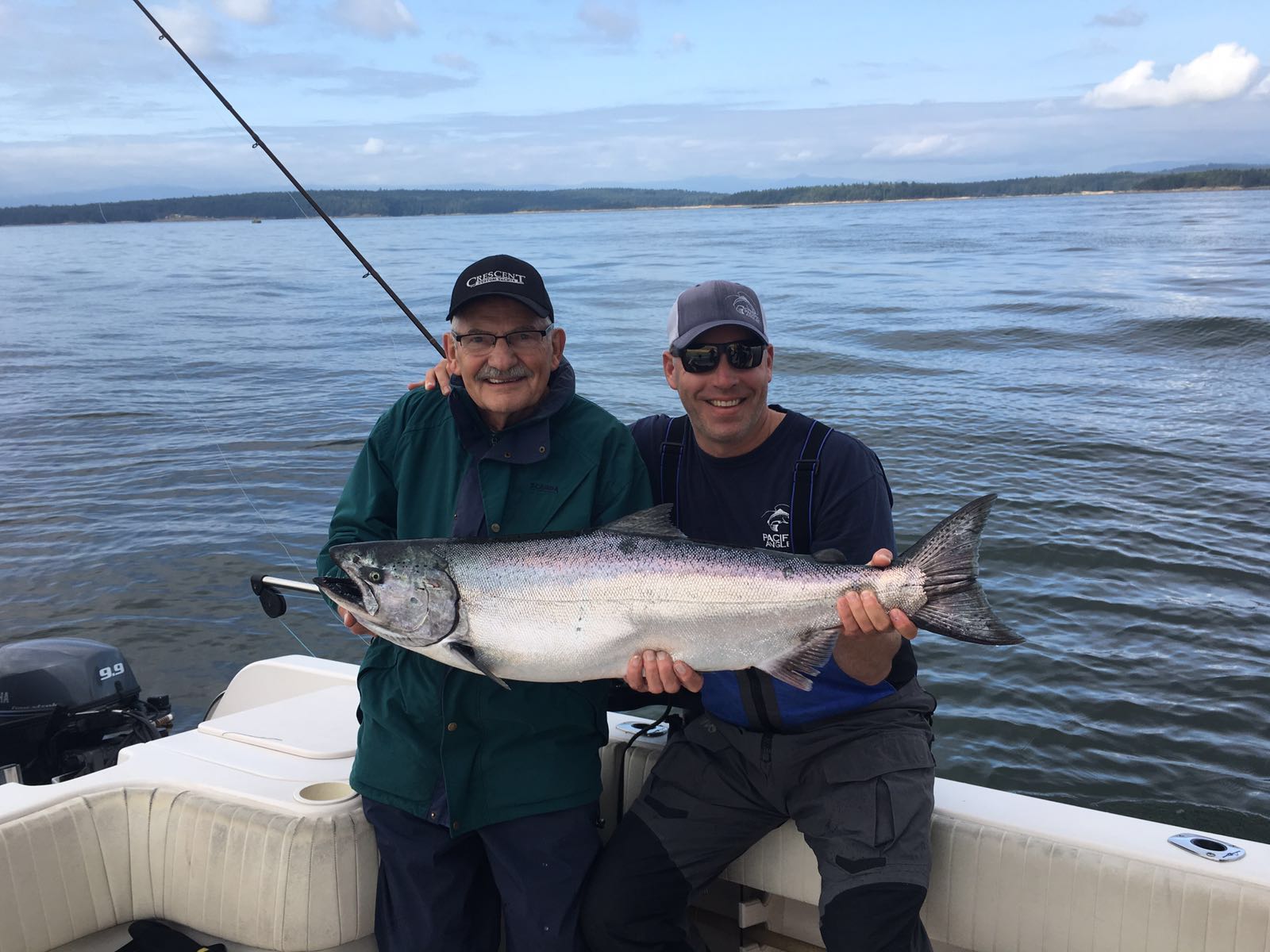 Guest Cal and guide Jason with an early morning chinook.

We have been into some nice chinook at Thrasher and Nanaimo as well.   These fish are deep. We’re running our riggers 180 – 240 feet. Double glow flashers and chartreuse splatter back hootchies have been producing well. 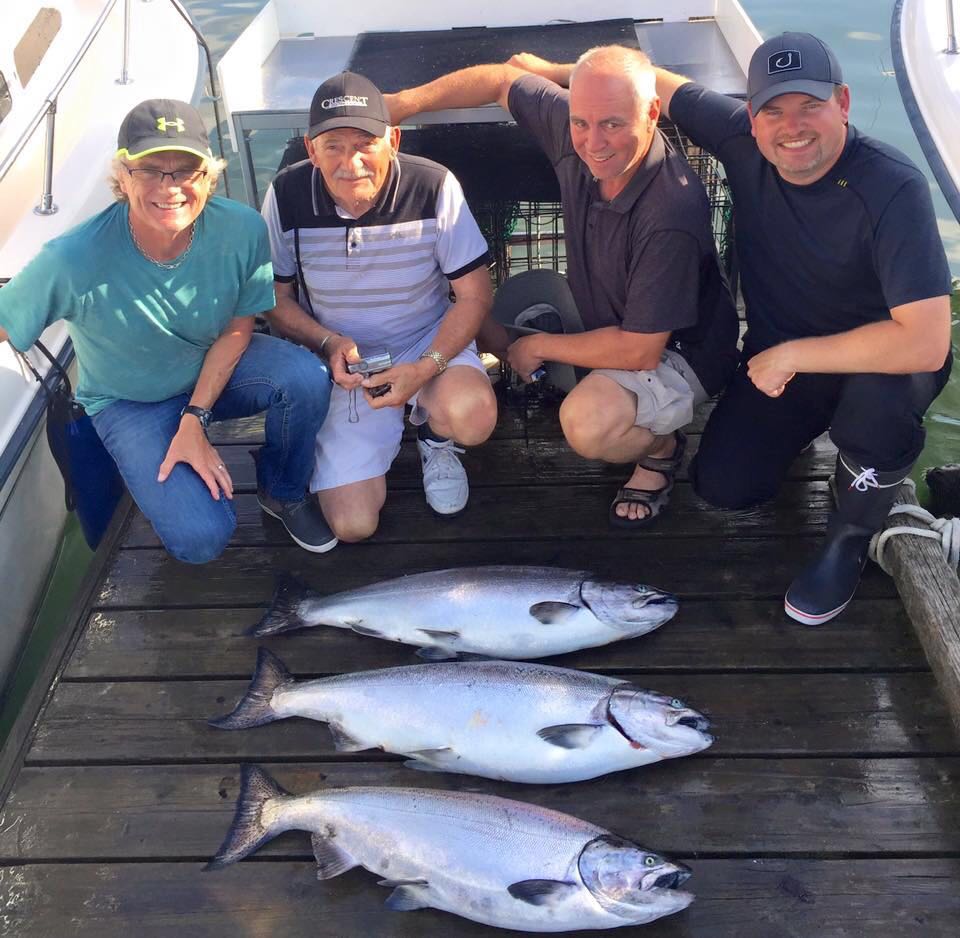 Some nice chinook from Gabriola and Nanaimo.

See you in the shop or on the water!

Posted on August 5, 2016 by Jason in FIshing Reports