Rain is coming! This is exactly what we have been waiting for on the river fishing front. Rivers will rise, steelhead will come in and resident fish will be feeding! The only questions that remain are how much rain and when will it come? If the weather man is not lying Squamish is going to get hit hard later today, Saturday and Sunday. Vancouver and the valley will hold off until Saturday and not get as much rain but 20mm is in the forecast for Saturday.

What will this do to the rivers? In the short term the Squamish (20mm +) may blow the river out but it will be interesting. The river is at the 2 year low right now and depending on snow levels it could hold and be excellent fishing. Check out Matt’s Squamish Fishing Report below.  For the valley there should be some good fishing if the rivers do not blow out and when they come back into shape expect excellent fishing. Check out Sam’s Vedder Chilliwack River Fishing Report as well as the other rivers for more information.

With the coming rain we also took the time to do a feature on one of the best steelhead baits that should be in all gear fisherman’s arsenal. Don’t miss Sam’s feature on how to fish prawns below his river report.

Winter spring fishing has been solid this week. On Wednesday the strait had calm weather and a number of boats hit the water. We are getting reports trickling in now so be sure to read out Jason’s Vancouver Salmon Fishing Report below.

FLY OF THE WEEK

We have something new this week. For those who do not know him, Andre Stepanian is our resident commercial fly tier at Pacific Angler. His beach patterns have revolutionized the local coho beach fishing scene, his epoxy minnows have become a staple for fishing both the Squamish and the Harrison River cutthroat and he is a master classic salmon tier. He literally ties thousands of patterns for the shop each year. Though his classic tying is as complicated and as advanced as fly tying comes, his commercial patterns are designed for simplicity. This week we are showcasing how to tie one of the simplest yet effective steelhead patterns for the Vancouver area. 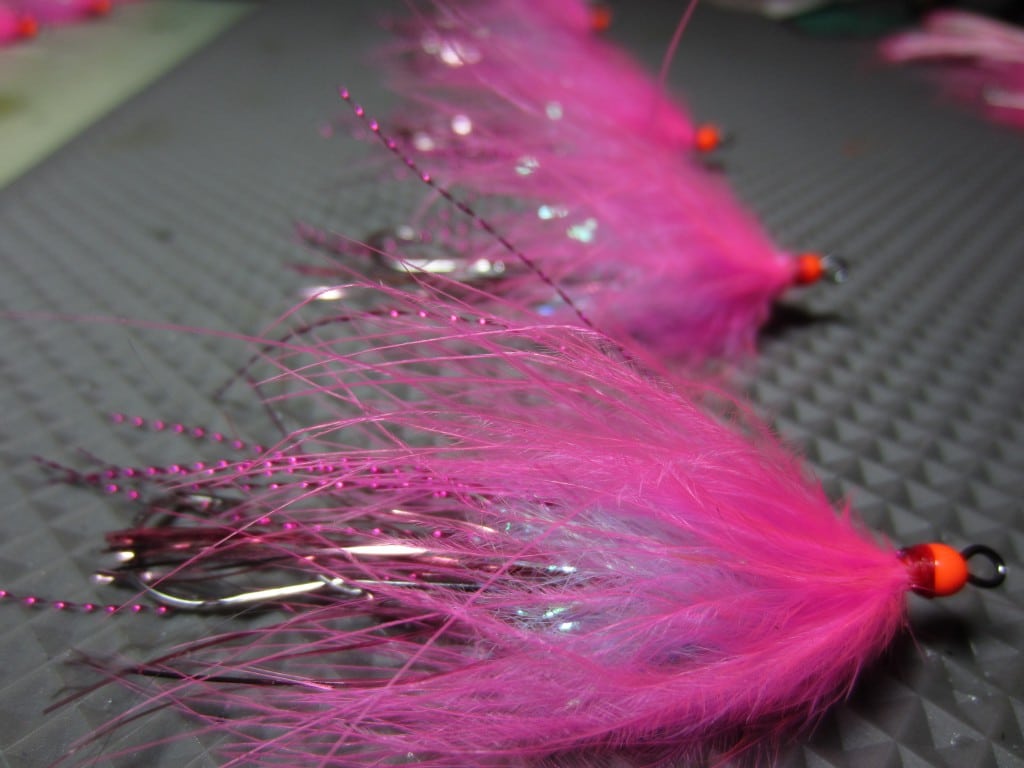 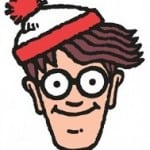 WHERE IN THE WORLD IS JORDAN SIMPSON?

Jordan is out on assignment. AKA he has bailed on work to drink beer and pull on monster fish in a warm climate.
The destination is Ixtapa Mexico where they will be fishing for sailfish and roosters, plus whatever else feels like biting the line. It is predominantly a gear trip, trolling for fins breaking the surface behind the boat, but a handful of the guys are bringing fly rods to hopefully tease a sailfish up on the fly. As well as the sailfish they are targeting inshore species such as Trevally and Roosterfish.  He is going to be taking lots of photo’s and writing a report so if you are inserted in sailfish or roosters or traveling to Mexico check out next weeks report when he gets back!

We have been hoping for rain the last 3 weeks and it is on the way! In previous reports I talked about ideal water levels and the importance of colored water for the bulltout – rainbow egg fishery. If the river is low and clear the water temps drop, clarity increases, fish get scared and their metabolisms shut down. When we get rain the water temperature increases, clarity decreases and more importantly eggs under the gravel and rocks get disturbed.

The big question for this weekend will be how much water ends up in the river. If you look back at historical water levels we were at the 2 year low this last week. Usually we consider 3 meters on the graph a “blow out” but with such extreme lows this number sometimes shifts.  We are out for my last installment of the Pacific Angler Egg fishing Course this weekend and though we are prepared to get wet I am optimistic that the fish will be active. I will have all the details on how it goes next week and it will help to dial in the river levels for the upcoming month.

For guys heading out in the next week things look very good. Watch the river levels. The best fishing will be when the river starts dropping after the rain but there will be windows as it rises where fishing should be awesome.  Have a full selection on beads and sculpin patterns. We expect dirtier water so brighter colored eggs and larger streamers are the way to go.

On the steelhead front we do not expect any fish to come in with the rain but it is possible. Buy a lottery ticket if it happens to you because it will come with a whole bunch of good luck. Historically the steelhead start showing up late February.

Stave River Fishing Report
Depending on the dam, the Stave could be a good bet this weekend. If they really open the dam it will be difficult to fish but the second they close the dam it will be on fire. If they do not open the dam things should still be good with the rain and warmer air temps. Use small nymphs and egg patterns for the whitefish, cutthtrout and bulltrout and do not be surprised if you catch an early steelhead. If you want to specifically target the steelhead, a light sink tip and medium size streamers in black and blue or pink are recommended. Andre’s pink popsicle is a great simple option that fishes well in this river.

Chilliwack-Vedder River Fishing Report
No need to worry about frozen guides this week! It looks like the warmer weather has come and with it some precipitation. The river should hopefully rise back to its seasonal height which should bring fish into the system. The Slesse clay slide will most likely be an issue, it’s been frozen these past few weeks but now with the warmer weather and rain expect the river to be chalky from there down. Fishing larger presentations to just be seen is recommended. You will find clearer water above the slide. Also remember that when water levels rise  fish are moving and when there is color in the water fish will tend to sit close to shore. Always start out close and shallow and work your way out methodically. Fly fisherman should always let your fly dangle a few seconds at the end of your swing to target these aggressive shallow swimming fish. 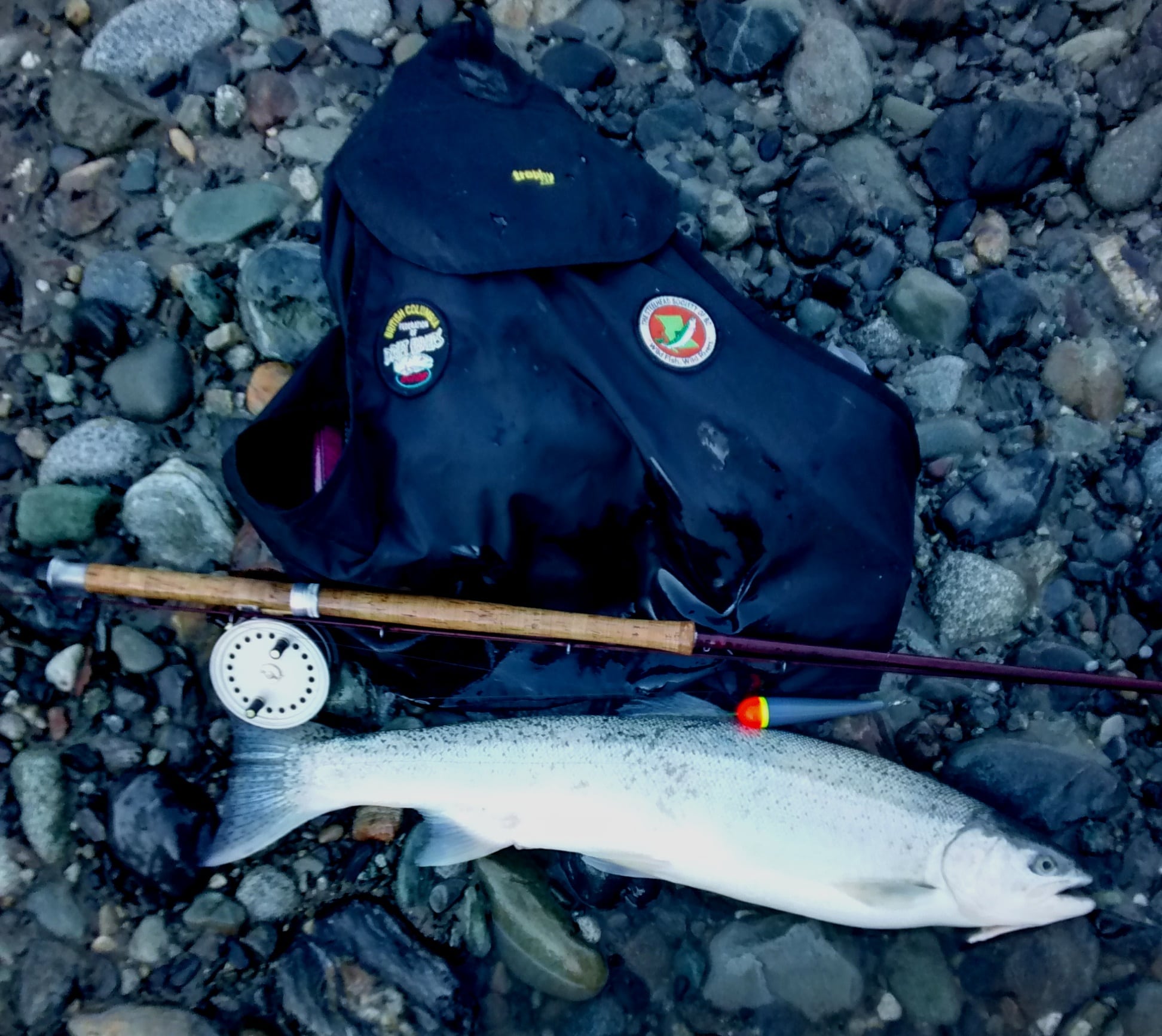 Chehalis River Fishing Report
The river may rise a little with the upcoming rain and possibly a bit of snow melt but it is a stretch. If we get a good dump of rain, 25-30mm, then it may be worth a look. Fluorocarbon leaders and small baits such as roe bags, Jensen eggs, and dew worms are usually a good bet as any fish in the system will be very aware of its surroundings so the stealth approach is a must.
If you fish the Chehalis and want to keep fishing it I urge you to sign this petition regarding dumping contaminated soil in to the Chehalis Watershed. 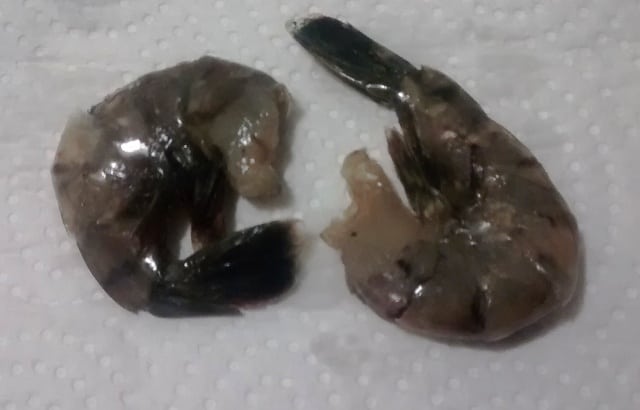 One of the Best Steelhead Baits – The Prawn

When people think of deadly steelhead bait, ghost shrimp and steelhead roe come to mind. These two baits are sought after by steelhead drift fisherman because of how effective they are and how hard they are to come by. Collecting ghost shrimp or bugs is a grueling task done late at night on your local beaches at low tide. Steelhead roe can only be acquired by retaining a female hatchery steelhead which at times is easier said than done.

Another bait that has been used for quite some time and doesn’t get as much recognition is the prawn. This is very versatile and easily acquired bait which is a go to for winter run steelhead as well as chum. You can pair this natural bait with presentations such as wool ties, spin-n-glos, Jensen Eggs, Jigs, and you fish the whole prawn by itself. Sometimes picky fish will turn their nose up at presentations lacking scent, the addition of prawn or shrimp usually changes their mind. It also gives them something to hold onto when they bite so your hook up ratio goes up when the float goes down.

When rigging them make sure to fish it just like you would roe. Take the hook point through the bait, slide it up the shank, and open the bait loop and cinch it over the chunk of bait. Sizes of prawn or shrimp vary from dime to golf ball size. Match it to the river conditions and you’ll be fine. Use a small pair of scissors to cut chunks off the pawn. You can rip the prawn apart but it will be more durable and stay on you hook longer if you use scissors to make clean cuts.

You can purchase prawns or shrimp at any grocery store with a sea food section. I prefer un-cooked prawns with the shell and legs on, they give off more scent then the cooked option and if I was going to fish the whole prawn the legs make it come to life.

Another major benefit of the prawn is the fact that they are relatively clean, both for the fisherman and the river. No pink hands, stained waders and excessive cures dumped into the river.  The best way to keep them is frozen, in the freezer, in a Ziploc. Defrost them the night before you go fishing. Adding this to your steelhead arsenal will hopefully bring you a few more fish to hand this season. 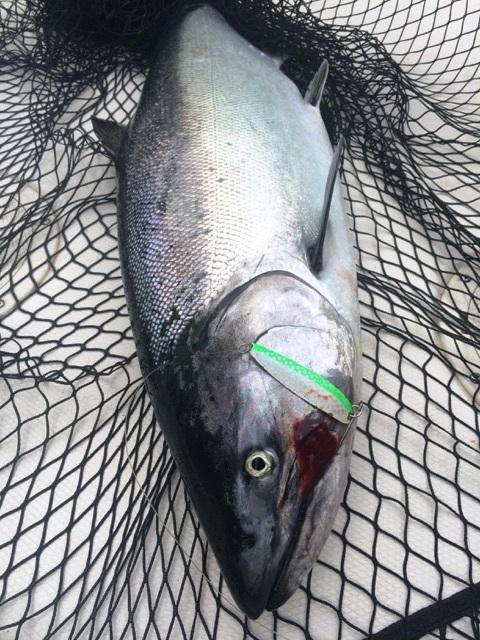 The fishing continues to be good for winter chinook here in Vancouver. So far in general the season has been a productive one for those willing to put in the time in search of these tasty winter chinook salmon.
Fishing in the harbour has been producing mostly undersize fish so far, with a few shots at larger fish. This can change in an instant. Historically right around mid Jan we see some larger fishing being caught in the harbor. Two productive spots are the Cap Mouth to Pink Apartment area on the flood tide and the Freighters on the ebb tide. In both spots make sure to keep your gear very close to the bottom as that is where the bait is and so are the chinook.

If you want to venture a little further out, Howe Sound has been producing some consistent action and so has the Gulf Islands. Productive setups continue to be Green Onion Glow, Purple Onion Glow and Chartreuse Glow flashers with a spoon. Some of the top spoons have been Kingfisher 3.0 in Irish Cream and Homeland Security and Pesca spoons in Clupea, and Gut Bomb. 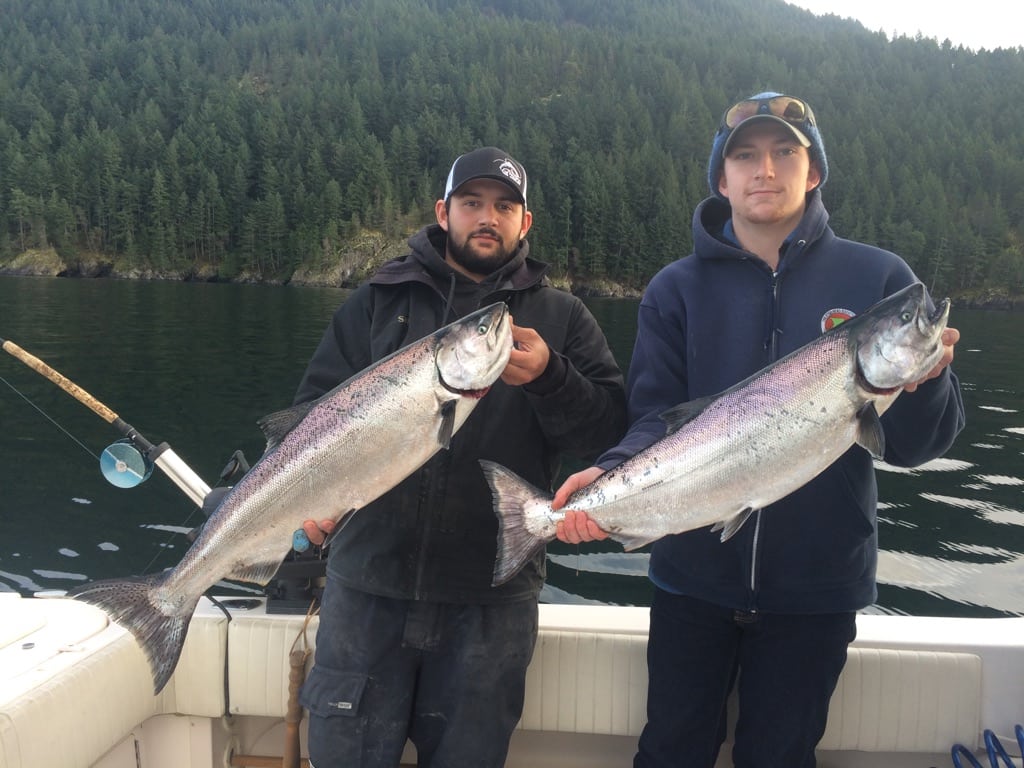 Posted on January 15, 2016 by Jason in FIshing Reports