We are hitting the prime time of our river salmon season and the weather is shaping up well… maybe not for the guys who got drenched yesterday but at least in terms of overall temps and river levels things are looking good.

The rain yesterday may have made things a little less than pleasant for being out on the water but it doesn’t look to have affected river levels. As we write this report the Vedder, Stave and Squamish are stable and dropping. We might see a little bump from the rain overnight but it is cold and this is going to keep rivers from blowing out. The weekend looks great for weather with cool stable conditions. If you are planning on heading out to any of the major river systems, it is go time!

Andre was on the Harrison and we have his report below. We also have some news from the Vedder and some good reports from the Squamish system. None of the fisheries have been on fire but most anglers are finding fish consistently. We have details on the salmon fishing on the Squamish, Vedder, Harrison and Stave below and we also have a look at sturgeon fishing. It has also been excellent and still well worth getting out.

The other interesting thing in this week’s report has been the winter spring fishing. We are already hearing of consistent reports of decent sized fish and it is an optimistic start to the season. Check out Jason’s Saltwater report for more details.

Good Luck out on the water!

Fly Fishing For Salmon In Rivers
Fly fishing for salmon is one of the most exciting fisheries in the Lower Mainland. Let us teach you the techniques and the hot spots to catch salmon on the fly in our local rivers. In the 3hr evening seminar you will learn about rod, reel and line, sink tip, and fly selection. Then put the skills into practice during a fully guided day on the water where you will learn how to read water and swing the fly!

Seminar & Guided Walk’n Wade Cost: $250.00 per angler, minimum of 2 anglers per guided day on the water. 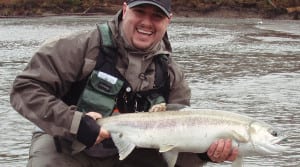 Fly Fishing Egg Patterns
This course is designed to teach you the secrets to one of the most productive presentations in the BC fly fishermen’s arsenal; nymphing egg patterns. This deadly method can be used for different species of trout, char, and salmon. During a 3 hour evening seminar we will teach you key concepts, strategies, and gear that will give you a well-rounded foundation during the seminar portion of the class. Then you will put those skills into practice during a fully guided day on the water. 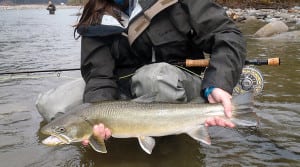 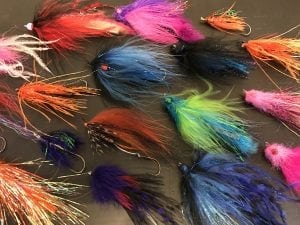 Keep an eye on your inbox for a feature mailout with all the details including and overview of our expert tyers who will be joining us and how to get your free spot at the tying table!

Chilliwack River Fishing Report
It’s starting to get cold! The Vedder is now just past “peak” season but that doesn’t mean there aren’t still fish to be had. While the lower river has been relatively quiet there are still good numbers of fish being caught in the middle and upper river, mostly coho and chum at this point but there is still the odd bright chinook around as well.

Anglers have been doing well in both frog water and in drifting water so there is virtually no limit on the types of presentations that will work. The big winners for gear fishers will still be pro-cured roe, jigs, spoons, and spinners, while fly fishers will want to fish sparse flashy flies in the slow water and bigger colourful intruders in the faster water. Depending on water conditions we can expect to catch fish right through to the end of the month, though it will progressively get slower and slower as the run tapers off.

Squamish River Fishing Report
This past week saw the Squamish and it’s tributaries drop into shape with some decent clarity. Most anglers were able to find fish, and a couple anglers also encountered bears.

At this time of year, it’s important to be bear-aware, as they get ready to hibernate. Though one would suspect that humans wouldn’t be the first item on their menu with so many free salmon that are easy to catch, we still have to be smart and safe when out there in THEIR home. Bear spray and/or bangers are always a good idea, but more importantly make noise when hiking in the bush and if you encounter a bear be cool, don’t show fear and give them their space.

There were reports of small waves of fresh chum rolling in at some of the more common lower spots, with float fisherman and fly anglers doing quite well. 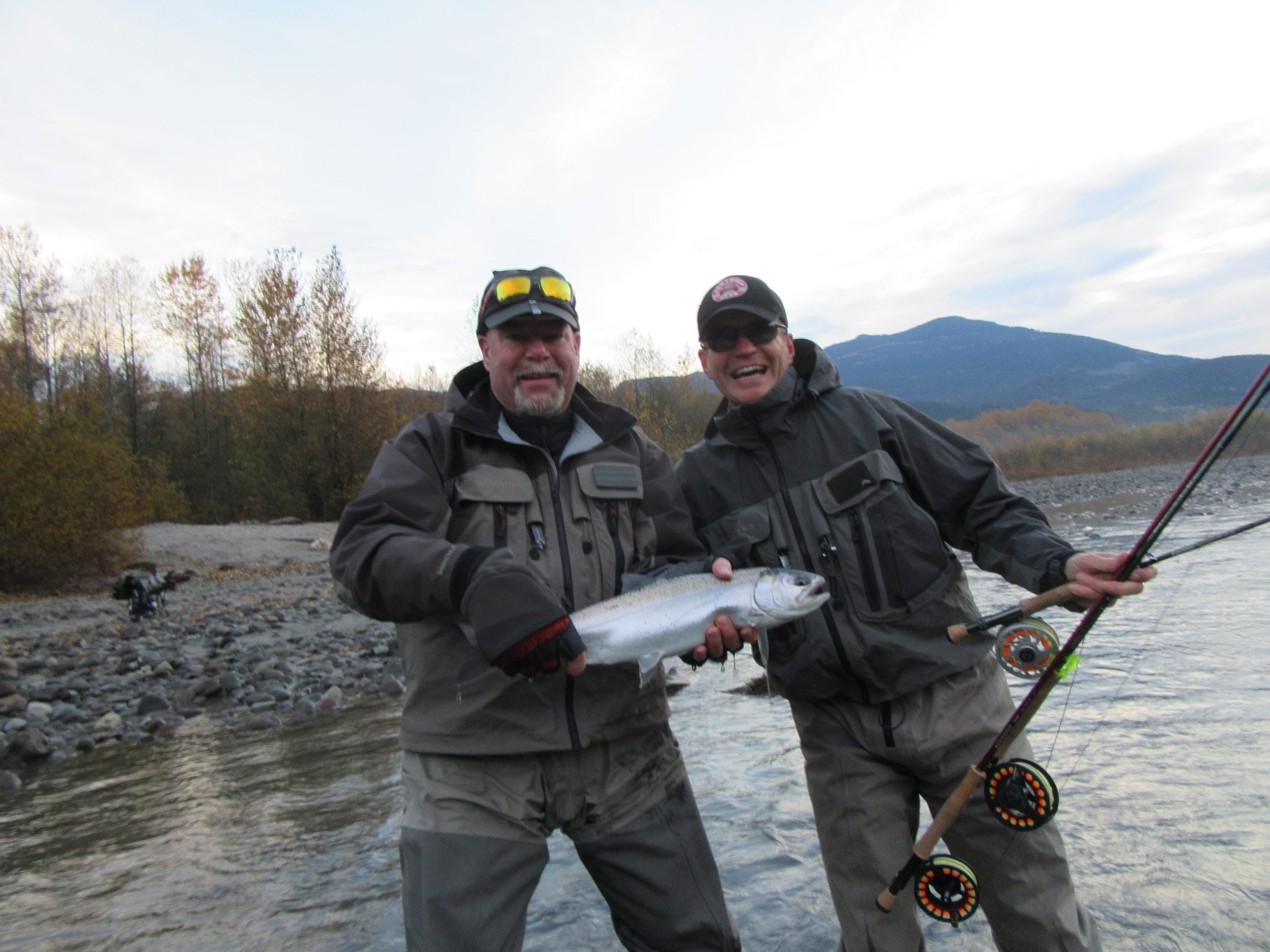 Kyle and Brian with a nice coho caught while chum fishing the lower river.

For targeting trout (and incidental coho), egging/beading has still been one of the most effective ways to fool them. All three stages of eggs (fresh, fresh-dead, and washed-dead) have been effective, but after this rain settles, I would make sure to have at least fresh-dead or washed-dead in my kit.

Keep in mind that this system has a bait-ban year-round. Anything with scent, regardless of synthetic or natural, is considered bait and is not allowed. Along with this, all trout and char (dolly varden and bulltrout) must also be released. Seasonal salmon allowances may occur, but for the most part this is a catch and release system. Please always follow the regs, and do your best to leave it cleaner than when you arrived.

The bend is your friend,

Stave River Fishing Report
The Stave is still seeing lots of fish. Although it will start to taper off over the next two weeks, there is still lots of chances to hook chum, coho and then trout using beads over the next month.

Try drifting jigs, spoons and Colorado blades under a float as it will be very effective with a large amount of fish that are already in the system. Also, try twitching jigs, as it can be very productive. Remember to loosen the pressure on the line if you foul hook a fish, as they are most likely to unhook themselves more easily that way.

Looking for frog water is key if you want to cast spoons and spinners or fly fish coho.   In this kind of water try casting crocs, blue fox, or Koho spoons.  Twitching jigs are also excellent in this type of water and using small flies is extremely.

As for the flies, try coho buggers, Mickey fin, woolybuggers, etc. Andre’s Coho fly selection is more designed for the Harrison but they works wonders for the fish in the Stave as well. Drop by the shop and we’ll be happy to help you pick out a few winners.

Please follow the regs. If you see any poaching activities such as anyone throwing the Salmon back after killing it and taking its’ roe please contact the 24-hour R.A.P.P hotline (1-877-952-7277) and report them.

Harrison River Fishing Report
We’ve had really good reports coming from the Harrison River this last week from a few friends that were up there with boats. I saw a lot of pictures of coho and cutthroat! The river is descending with the occasional bump in the level but overall should be good unless again we get a large amount of rain. At this point if you are on foot you can start fishing the golf course side until the other side becomes accessible on foot below 9.1 meters. These next two weeks are the best time as majority of the coho move in. I have not heard of any good chum reports this year from the Harrison or another couple of rivers, this could be good for coho as they will rest in pockets of water without getting bullied out so as soon as you can access the back channels (8.8 meters) and the mouth of the Chehalis you can hunt for these silver beauties. I have tied lots of new coho flies that will work well in November. If you do catch cutthroat please handle them with care, as they will be returning to the ocean after springtime.

Fraser River Sturgeon Report
Sturgeon fishing in the Fraser River at this time of the year can be very productive as a good number of salmon are in the Fraser as well. Fishing with bait such as uncured roe, salmon flesh, lamprey eels, or globs of dew worms can produce lots of bites if they are around.

Don’t be afraid to try both the freshwater and tidal portions of the Fraser River as the sturgeon are dispersed throughout.

In the freshwater portion of the Fraser River, you need to have at least 20oz weight to anchor your bait down properly as there is too much current. However, in the tidal portion, 6-12oz is adequate.

Sturgeon are an endangered species.   So remember to release them with care and avoid lifting the larger fish fully out of the water in order to reduce their stress.

Well it is November and the cool winter weather is starting to arrive with even some snow in the forecast for some regions. So when it feels like winter some get the skis ready but for us that means winter chinook season has finally arrived! In last weeks email I alluded to the fact that so far so good, with some early season success. That trend has continued for the most part, with our charters this past week picking up some nice chinook in the Howe Sound area. There have also been some good reports from South Bowen, Vancouver Harbour, Nanaimo, Gabriola, and Galliano areas. 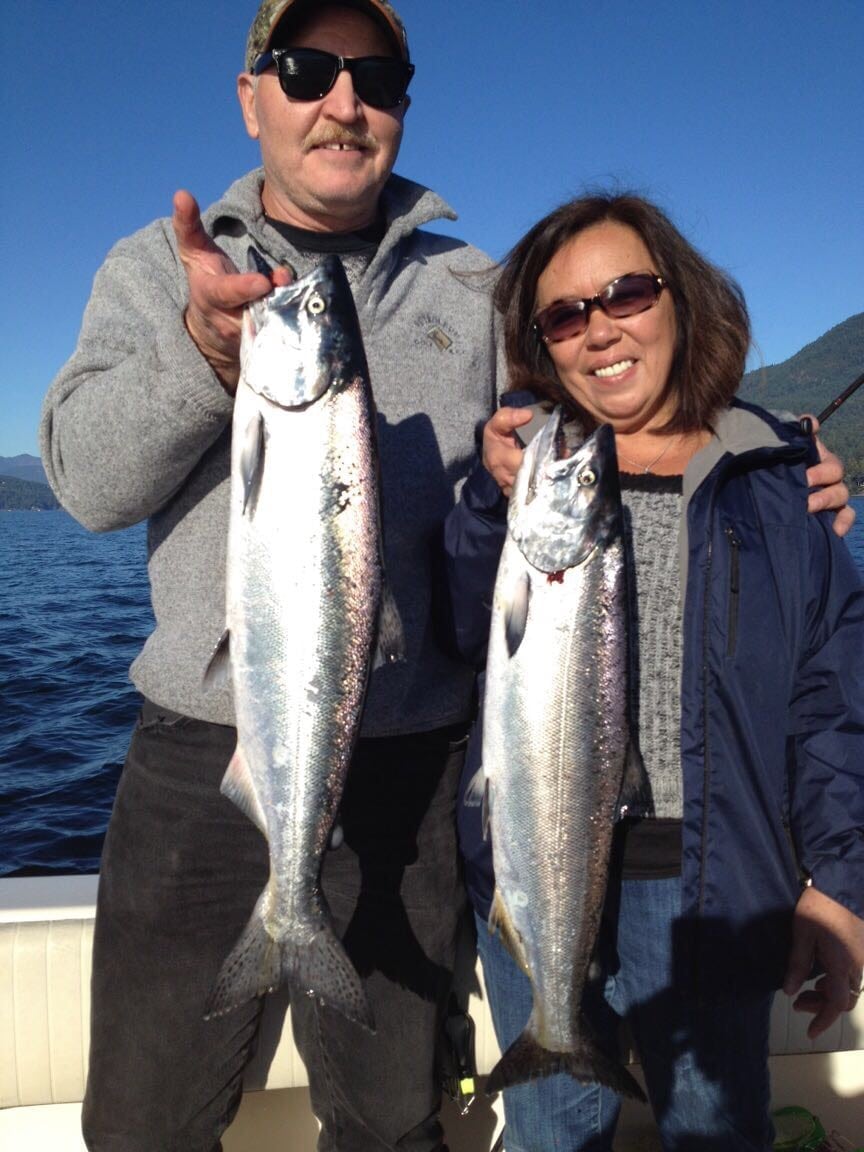 A couple of nice early winter chinook from a charter last weekend.

If you have read my winter chinook reports from previous seasons, or perhaps taken one of my courses, you will know that when it comes to this season, don’t wait for the report. If you have the time off or the conditions are good, simply go. These fish move around a lot and they are literally here one day and gone the next so even a report from the day before doesn’t mean too much, if anything it just gives you some confidence there are some fish around. It is also a long season.   It starts around now and ends around April and is highly variable as the fish and the bait move around all winter long. So from now until April you are going there will be reports of fish in the Howe Sound area, South Bowen, West Van, The Freighters, Nanaimo all the way down to the Gulf Islands, and also at the Coal Ports (although this area closes Jan 1). So get the coffee nice and hot, grab your toques and gloves, and head out there and get some of the tastiest fish of the season. 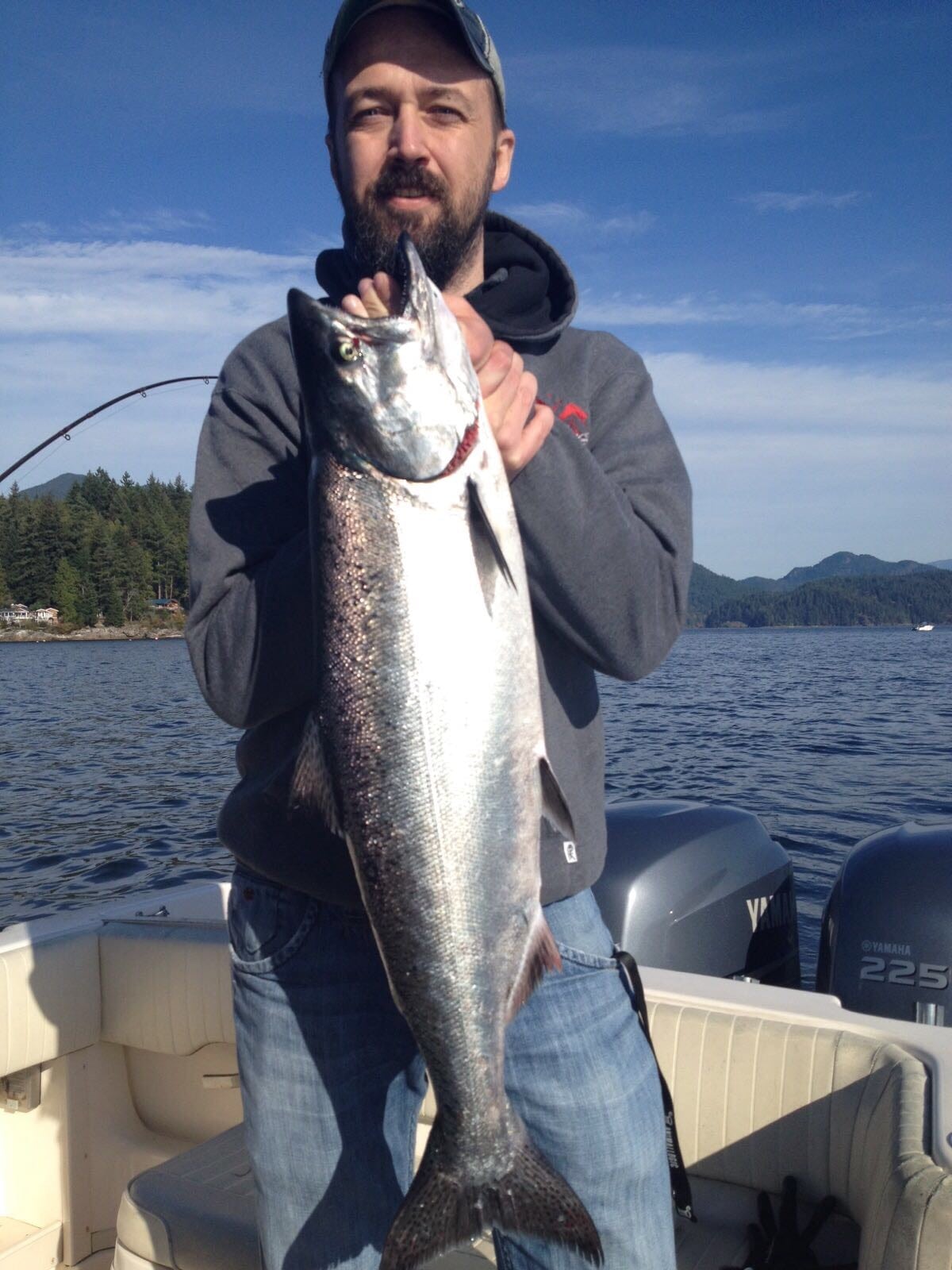 A decent size winter chinook from this week. 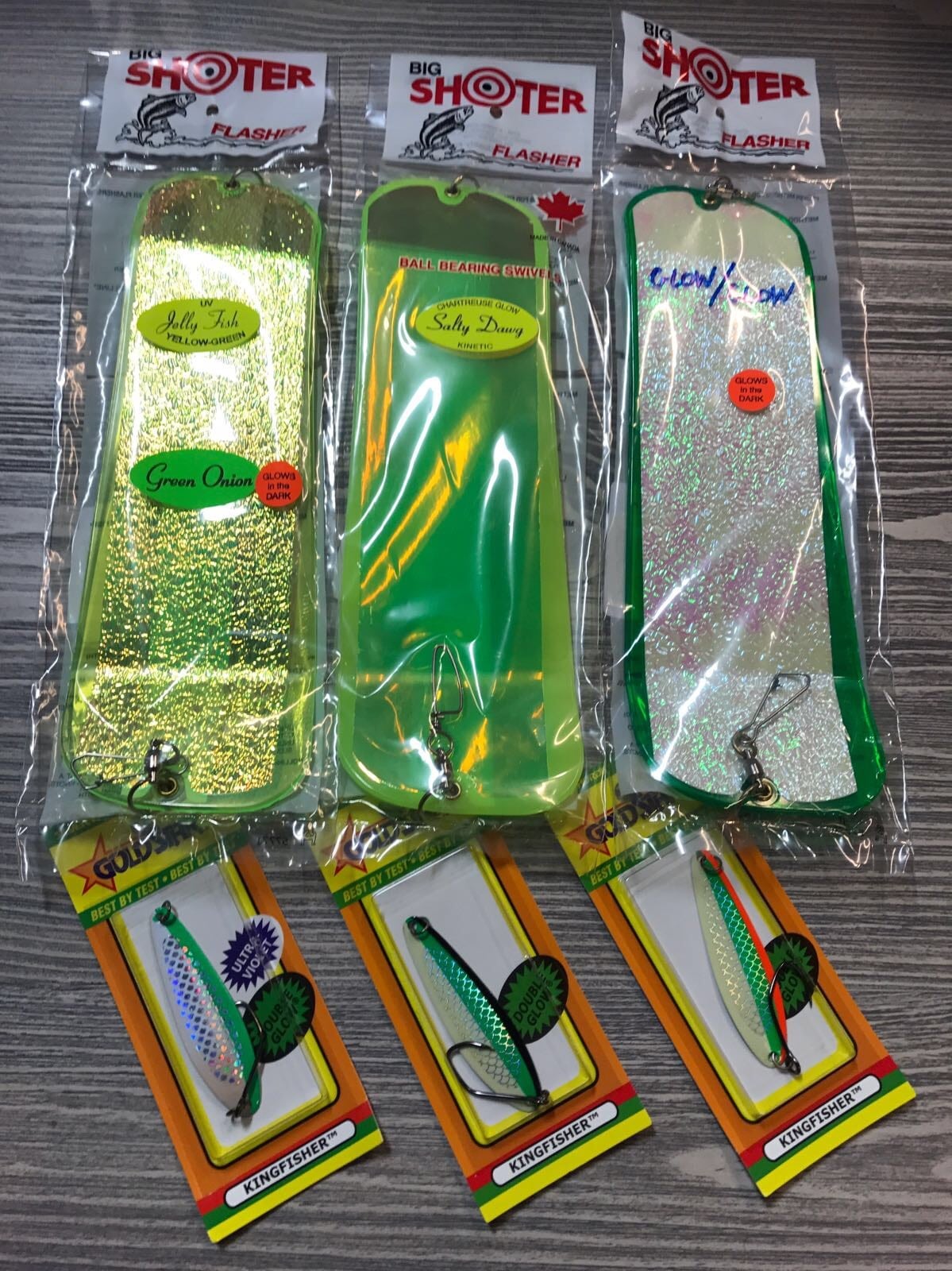 We plan on heading out this weekend if it is not too windy, so see you out there or see you in the shop.

Posted on November 3, 2017 by Jason in FIshing Reports