The sun is coming back! We had a mixed bag of wind, clouds and sun this last week but that looks like it will be changing with 5-7 days of good weather ahead! This should make for a great fishing weekend. The big question is, where to go? We have some options for you, so keep reading!

Sockeye fishing in the ocean has still not seen it’s peak, and though a few days of unsettled weather made fishing difficult, for the most part boats are limiting out and having a lot of fun with the millions of fish staging off the Fraser.

Bar fishing on the Fraser has been producing well for chinook and bottom bouncing has been consistent for the sockeye. The trout fishing on the Skagit and Thompson has also remained good. We had a few reports of actual hatches on the Skagit this week. Take a look at our Skagit River report below for more details. Even though sockeye are pushing into the Thompson customers reported that they are still not too thick to be affecting the trout fishing. (see the Thompson River Report below).

We are now hearing that most of the guys heading to the Fraser for sockeye are catching their limit and there are still millions more fish to come. If you want to tackle the Fraser and take advantage of this great opportunity to harvest sockeye then look to our Fraser River section for how to set up your rod and where to go!

The 2014 Labour Day Chinook Classic is fast approaching. This is your chance to win $25,000 for the biggest chinook released right here in Vancouver! 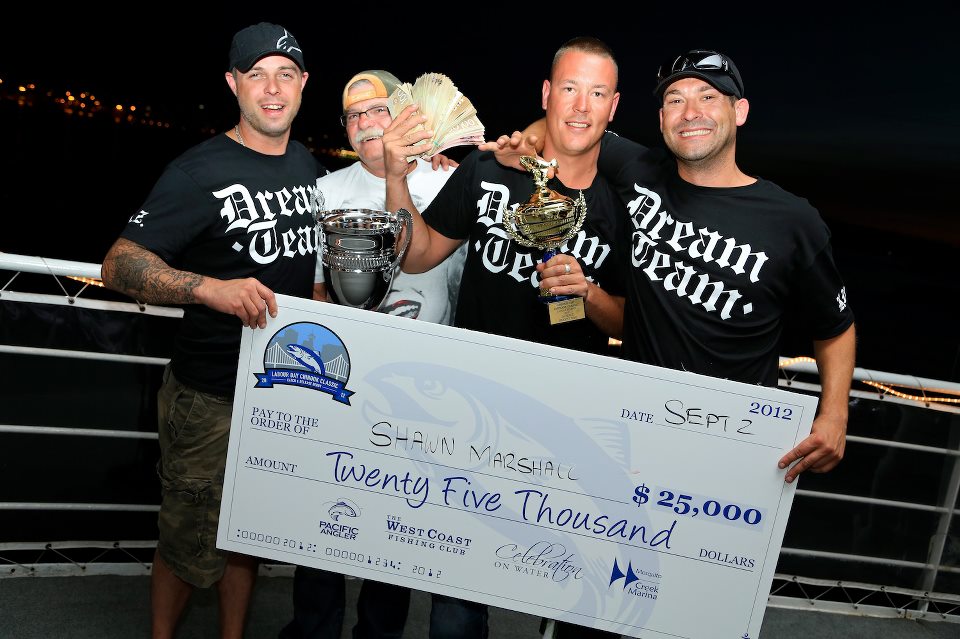 There won’t be much to say about this river system until mid September. Resident trout can be targeted in the summer months if the conditions allow. These trout are best targeted with nymphs, and streamers, but they will also take dry flies.

Squamish Cheakamus system is a 100% catch and release, single barbless hook fishery so play by the rules and have fun!

The Vedder is in “limbo” right now, as we are in between the end of the summer red spring fishery and the greatly anticipated arrival of coho and fall chinook to the system (white springs). The bulk of the red springs have moved through the system and are up in the hatchery, but the odd fish may still be trickling in. Now is a good time to start getting geared up for the fall salmon fishery. Practice your bait loops and start tying your leaders! The coho and fall chinook with begin to trickle in at the start of next month.

Please familiarize yourself with species identification as you may encounter Cultus Lake sockeye which must be carefully released .

A number of customers have been hitting the Skagit and though the reports haven’t been hot we are starting to hear more reports of actual hatches. Two customers ran into May fly hatches on different days in the mid morning and they both found a good number of trout rising. This is good news and we can expect hatches to get more consistent over the next few weeks. Parachute Adams were the go to during both of these hatches. The presence of tons of fry has also been noted by other customers after Matt’s report two weeks ago but nobody that we know has tried a fry pattern. We would love to know if someone has and found success. 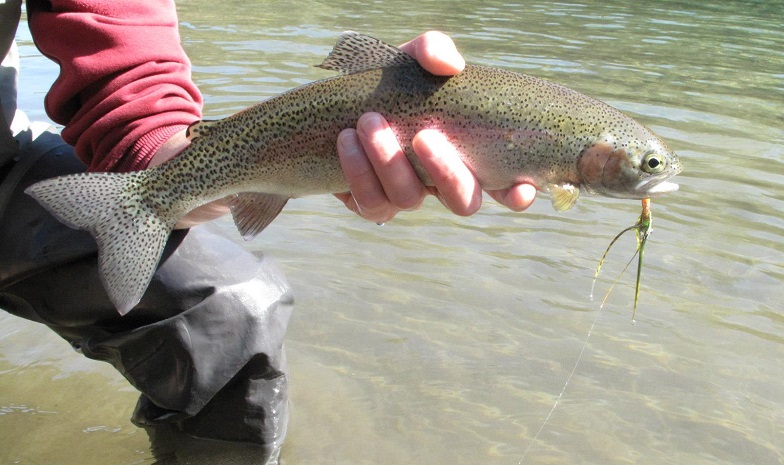 This rainbow on the Skagit River slammed a streamer.

We had good reports from the Thompson again. Last week we were concerned about increasing sockeye numbers. When the sockeye are too thick they push the trout around and out of feeding lies. We had customers down at Spences Bridge observe a number of sockeye moving through but it did not affect the fishing and they did well on California Blondes and stonefly nymphs.

We haven’t heard much from this system as of late. It’s safe to say the salmon fishing is done till the fall. Summer steelhead are present in the river. Because the water is generally very clear, first and last light are your best chances at hooking one of these fish. We are already looking forward to the fall coho fishery on this river.

The fall chinook fishery on the Capilano is right around the corner! This can be a very exciting time to fish. Because of the bait ban, we must use artificial baits to entice these brutes into biting. Spoons, colorado blades, wool ties, and jigs all catch fish. These fish will readily take artificial baits when they are fresh from the ocean and we advise everyone to keep your floats on.

Please note: ALL steelhead (adipose clipped and unclipped) must be released with the utmost care.

Bait ban as of August 1st.

We have not heard anything from the interior for a couple weeks now besides the odd Tunkwa report. Not a surprise as it is late August. The falls months can offer some great stillwater fishing so we look forward to hearing more reports then. If you are heading out lake fishing, try going to some lakes in the 4500 to 5500 foot elevation and you might be surprised how good the fishing is this time of year.

If you are looking to do some lake fishing for trout, the Whistler lakes are your best bet. Alta and especially Green Lake can actually fish better in the summer months. For Alta cutthroat try olive Wooly Buggers, and Muddler Minnows in various colours and flash combinations. Don’t be afraid to crack out the big streamers for Green. Large flashy rabbit strip streamers work quite well for the bull trout on the drop offs.

The coho numbers increased everyday from last Monday and the fish moved in closer and closer by midweek. I noticed a lot of finning fish indicating that fresh fish were moving in with a few odd jumpers. You will start to see lots of different pods and bigger fish as different strains of fish will swim around the mouth of the Capilano. Some days you will be standing on the beach and wishing you were on a boat as the fish stay a little too far away to reach them. For those who have a boat, you can have an awesome day using a clear tip line and more streamer type patterns. You will see different fly patterns on my board now as the fall will soon be upon us and the flies that work seem to change. You may notice that the majority of the fish are holding in front of the rock jetty to the light marker. The tides are going to be low in the afternoon which is still okay but a bit more challenging. Hopefully we will have some hazy days to cover the sunlight a bit. The ideal tactic for next week would be casting from a boat as the tides are not super low and as I mentioned from last week there are hardly any boats on the West Van side as everybody is after sockeye. The decrease in boat traffic and angling pressure can make for some good fishing.

The sockeye continue to roll in.  There have been a few slow days as the orcas have been around from time to time, scattering the schools of fish, but for the most part we are having some excellent fishing right now.  The limit for sockeye is 4 per person and you can see from the photos below, there have been a lot of chrome sockeye hitting our dock! 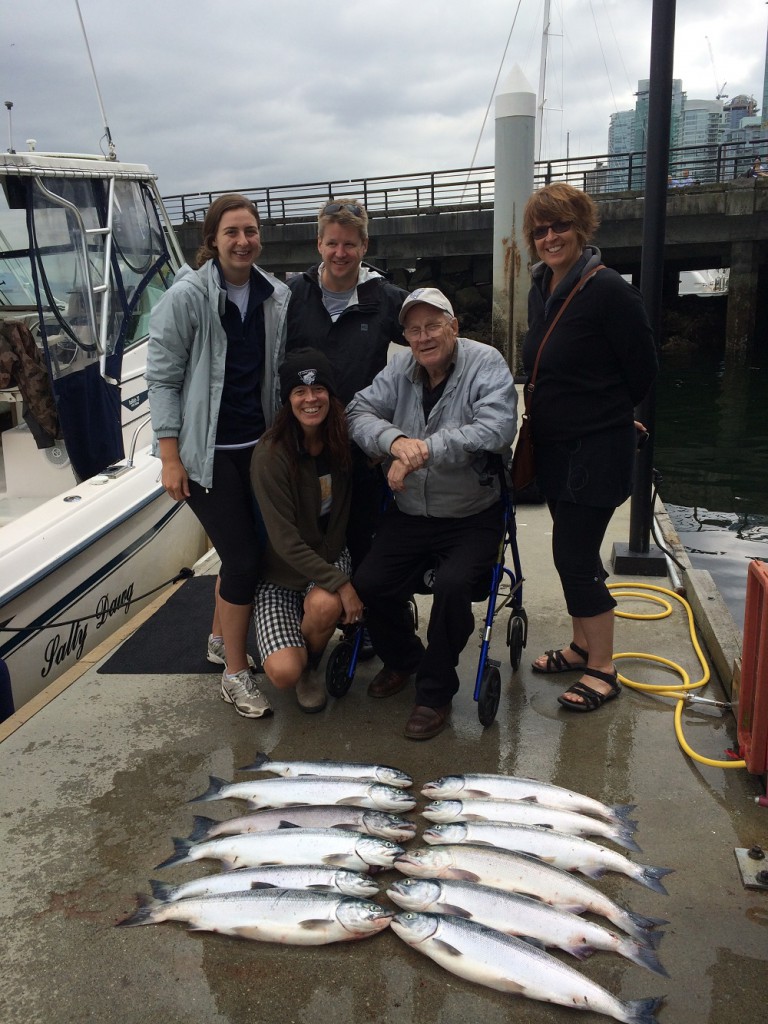 Dimitri’s guests were all smiles with a nice catch of sockeye from a 5 hour charter off the North Arm of the Fraser. 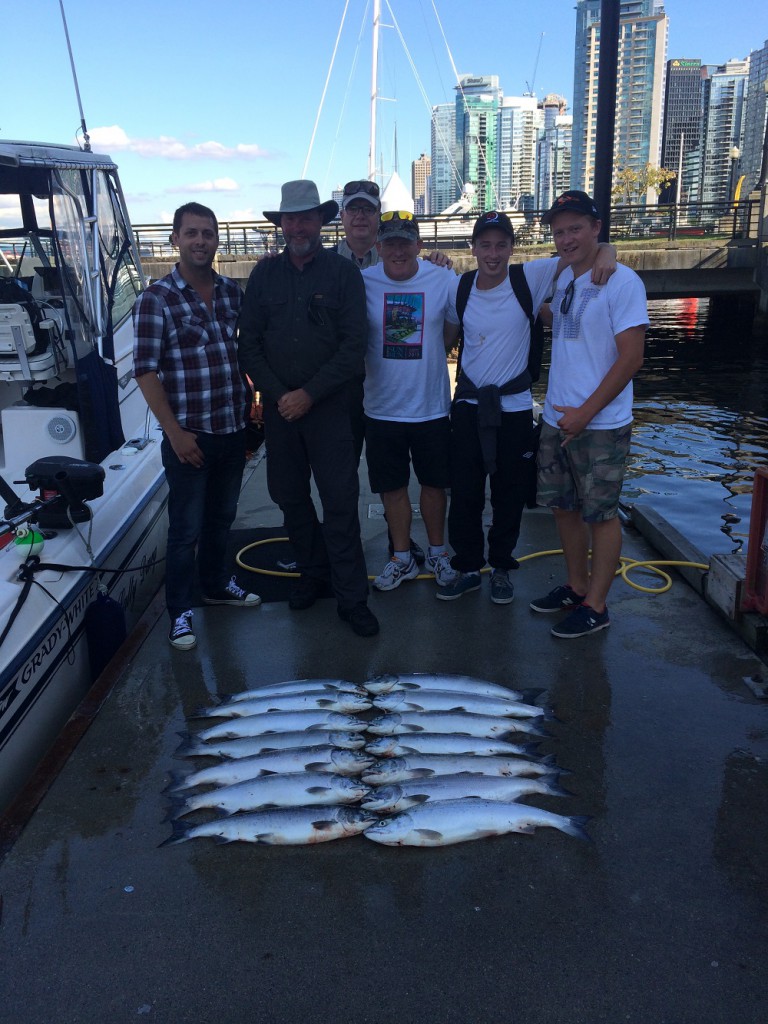 John Bertrand was visiting from Alberta and took some lucky friends out on a charter with Dimitri on the Salty Dawg. Looks like they caught plenty of sockeye for the BBQ!

We have been getting some chinook while fishing for sockeye as well. This should come as no surprise because if there was not a sockeye opening right now, we would be fishing anchovies for chinook instead of the pink hootchies we use specifically for sockeye. Sometimes the chinook hit these pink hootchies, but if you want to focus on chinook then use anchovies or a glow green spoon like a Pesca Leprechaun. In fact the opposite happened the other day. We were limited out on sockeye and were fishing for chinook with anchovies and spoons and we hooked a few sockeye on the spoons!  That is when you know the sockeye are thick. 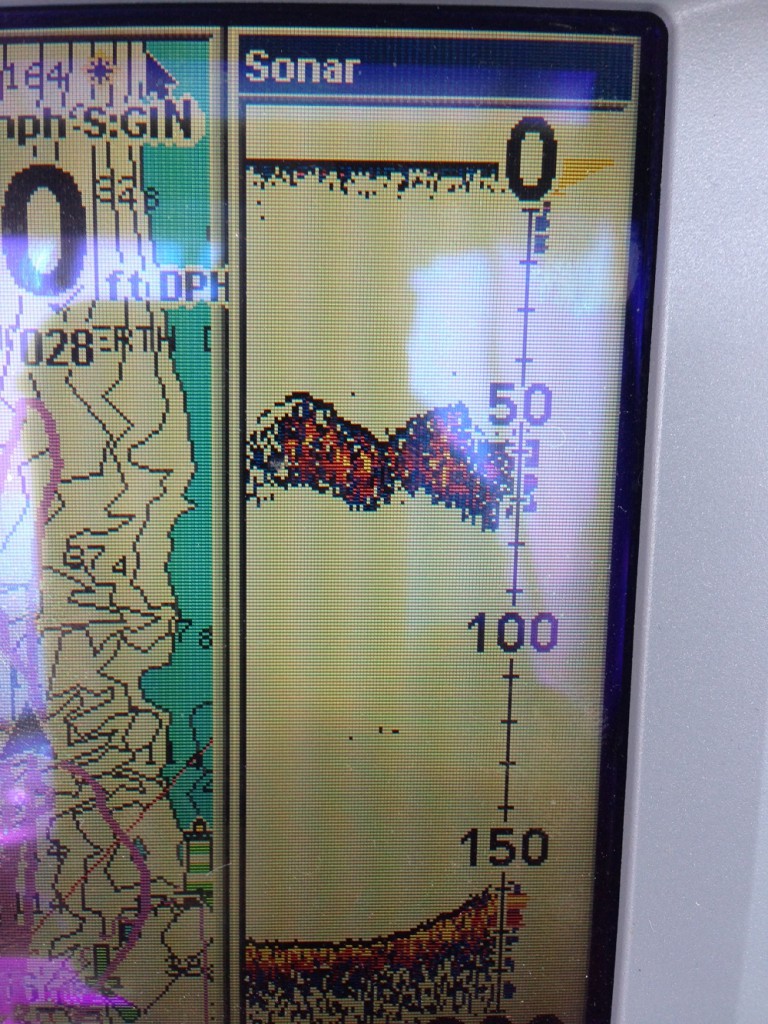 A big school of sockeye from 50 to 70 feet on the sounder. This was down at the South Arm of the Fraser 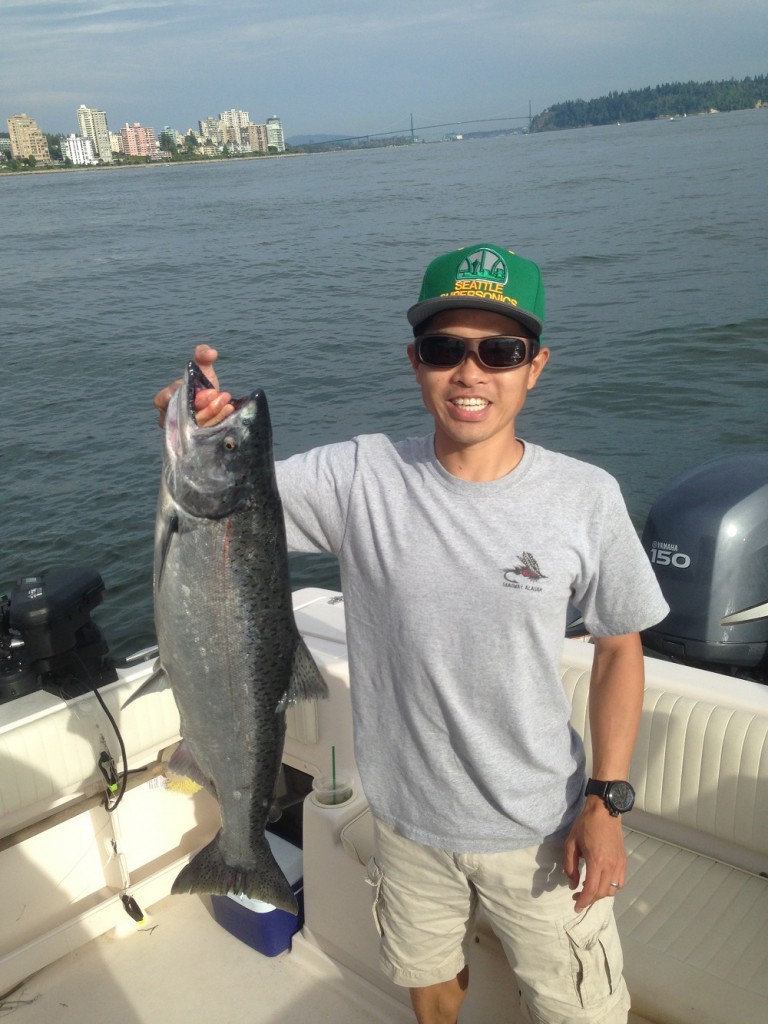 Mike Menten’s guest with a nice chinook taken off W. Van in 20 feet of water while fishing for coho! 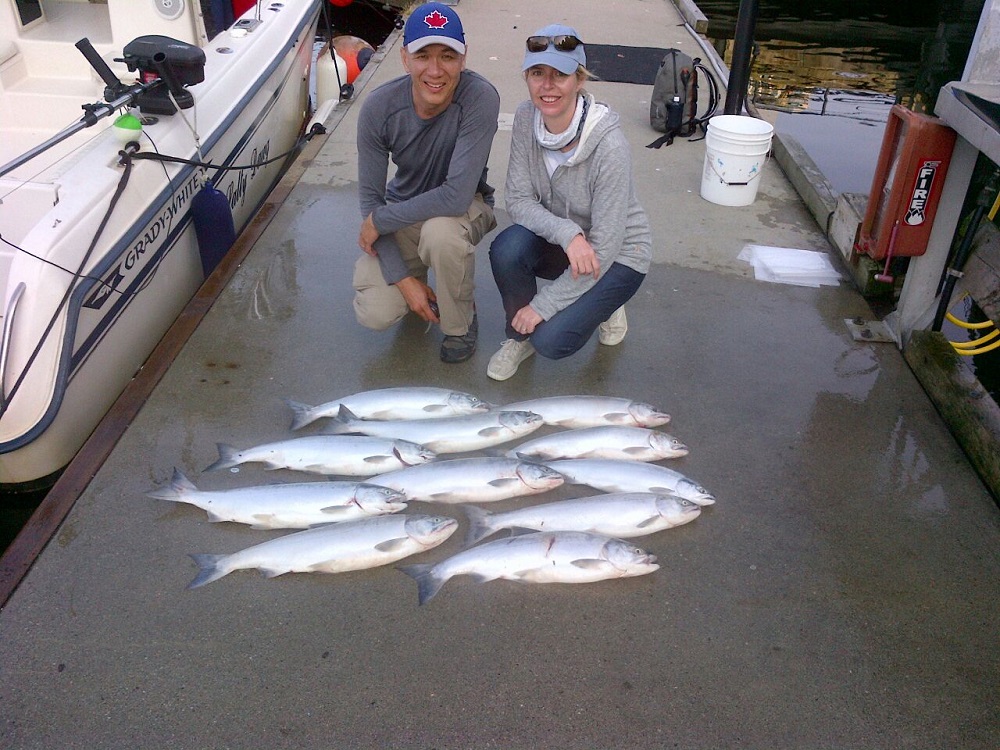 Steve and Joanne with a nice catch of sockeye on the Salty Dawg!

If you are heading out in your own boat, we have all the right flashers, hootchies, and spoons for sockeye or chinook, so come by the shop for some friendly advice. For sockeye we have been using a 28 inch leader with a hot pink or cerise Michael Bait Hoothcie with a 4/0 to 6/0 siwash hook. The size of the hook will depend on the brand and the model number as some have a longer or shorter shank. I prefer the Mustad Open Eye Siwash 10848NP-BN in 6/0 as it has a shorter shank, is offset, and has a nice bend to it like an Octopus style hook. My hook up to landing ratio has been awesome with these hooks. As you may already know, to catch sockeye consistently you need to run lots of flashers called “dummy flashers” and we have lots of these in stock as well.  If you haven’t set all this up before, I strongly recommend coming by the shop and picking up one of our diagrams and get some advice. Those anglers that are new to sockeye fishing, and have done this, are doing very, very well.

For the chinook anglers out there, fish are being taken at the Bell Buoy and T-10 on the ebb or flood tide, but the flood has generally been the most productive. Fish have been from 30-70 feet and your best bet is a chartreuse glow flasher, 6 foot leader, and an anchovy in a chartreuse or glow green teaser head. 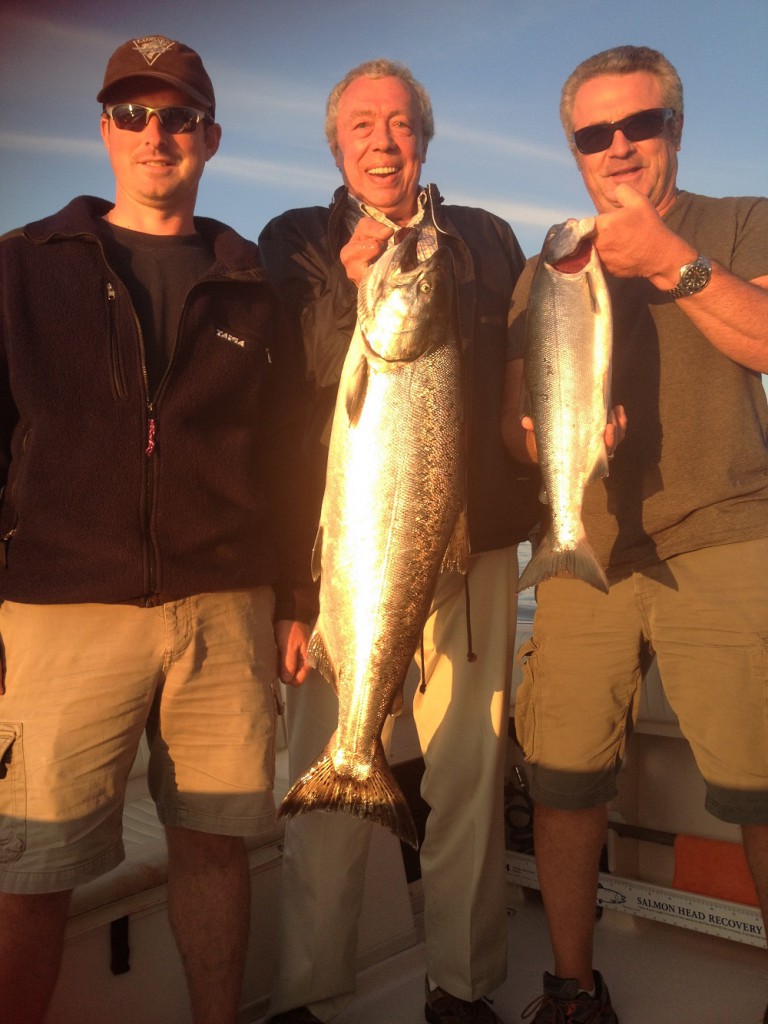 Sockeye fishing was a bit slow one evening this week, but Eddie got his guests into this nice chinook!

See you out on the water or at the shop,

Posted on August 22, 2014 by Jason in Uncategorised