A wet Wednesday and Thursday is going to make for an interesting weekend. A number of rivers are on the rise with the rain. They opened the Cleveland Dam early Thursday morning, raising the water level on the Capilano. The Chilliwack, Skagit and Fraser Rivers all responded to the rainfall quite quickly. Last week we got some awesome info about water levels on the Skagit and if you are planning a trip it is a very good warning and something to take into consideration (see report below). Depending on how high these rivers get, they could come into shape before the weekend is over, making for some great fishing opportunities. As we all know a bump in water levels will bring in fresh fish and move around the ones already in the system. We are looking forward to the reports after the weekend and expect good things.

The rising water in the Capilano has slowed down the saltwater fishing off West Vancouver for the time being. This lull will not last very long as more sunny weather is in the forecast for the weekend. Look to the Bell Buoy and the North Arm for the time being. We have heard some good things and it should only get better (See saltwater report below).

The 2014 Labour Day Chinook Classic is your chance to win $25,000 for the biggest chinook released right here in Vancouver! 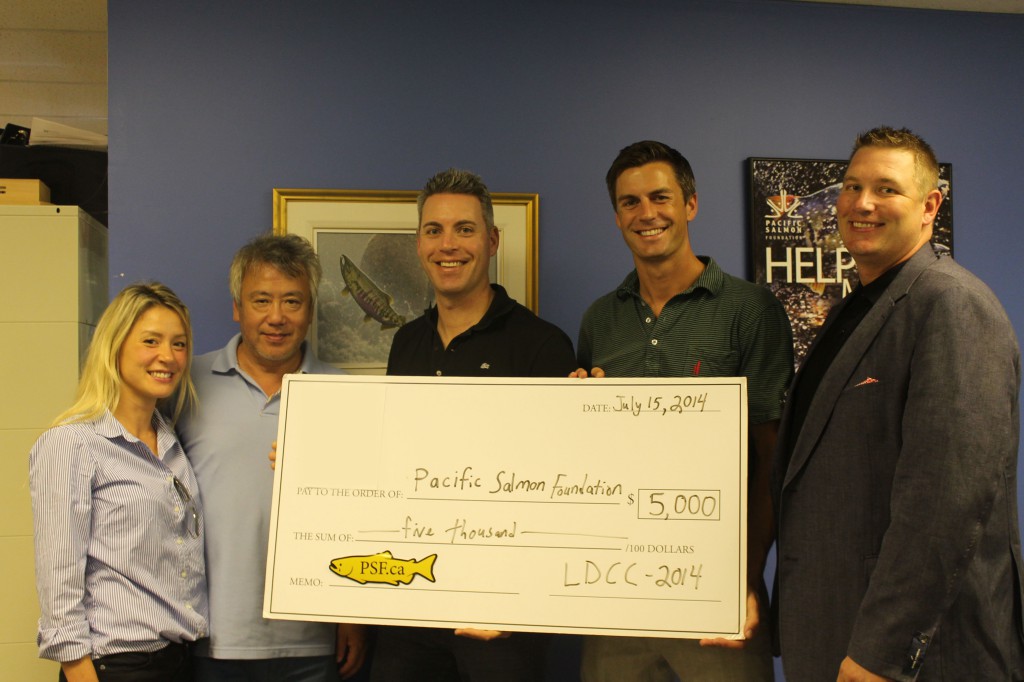 There won’t be much to say about this river system until the fall. Resident trout can be targeted in the summer months once the water has dropped. These trout are best targeted with nymphs, streamers, but they will also take dry flies.

Squamish Cheakamus system is a 100% catch and release, single barbless fishery so play by the rules and have fun!

The rising river level due to Wednesday and Thursday’s heavy rain will have brought in a fresh wave of fish. We have heard reports of chinook being caught throughout the system. Expect clarity to be poor until the river comes back down. The weekend looks promising with the river hopefully coming into shape by then. This is peak time for the summer chinook fishery so get out there while you can because this is a very short season. Those who put their time in can be rewarded with a fish for the weekend BBQ. If you have any questions about this fishery or need to get setup, feel free to stop by the shop and we’ll be happy to give you a hand.

Float fishing is the most effective method for these fish. Medium-heavy casting or center pin outfits are suitable for this fishery. Don’t be afraid to go big, 30-35g floats with hollow core pencil lead, 20lb mainline, 15lb-20lb Seaguar Blue label fluorocarbon leader, and 1/0, 2/0 and 3/0 octopus hooks. This heavy gear will not only help you land the fish but it will allow you to fish the heavier water more effectively.  Productive baits are cured roe, prawns, wool combinations, blades, and spoons. Water clarity will affect the size of your presentation, typically it will hover around 1ft to 2.5ft of visibility most of July, however, the clarity is already greater than 3ft.

Please familiarize yourself with species identification as you may encounter Cultus Lake Sockeye which MUST BE RELEASED WITH CARE.

We had some very interesting reports last weekend from the Skagit. The rain blew out the river just before the weekend. A good customer sent in the pictures below. In the morning river levels were okay and the water clarity was decent, but within a matter of hours it rose violently and turned to chocolate milk! 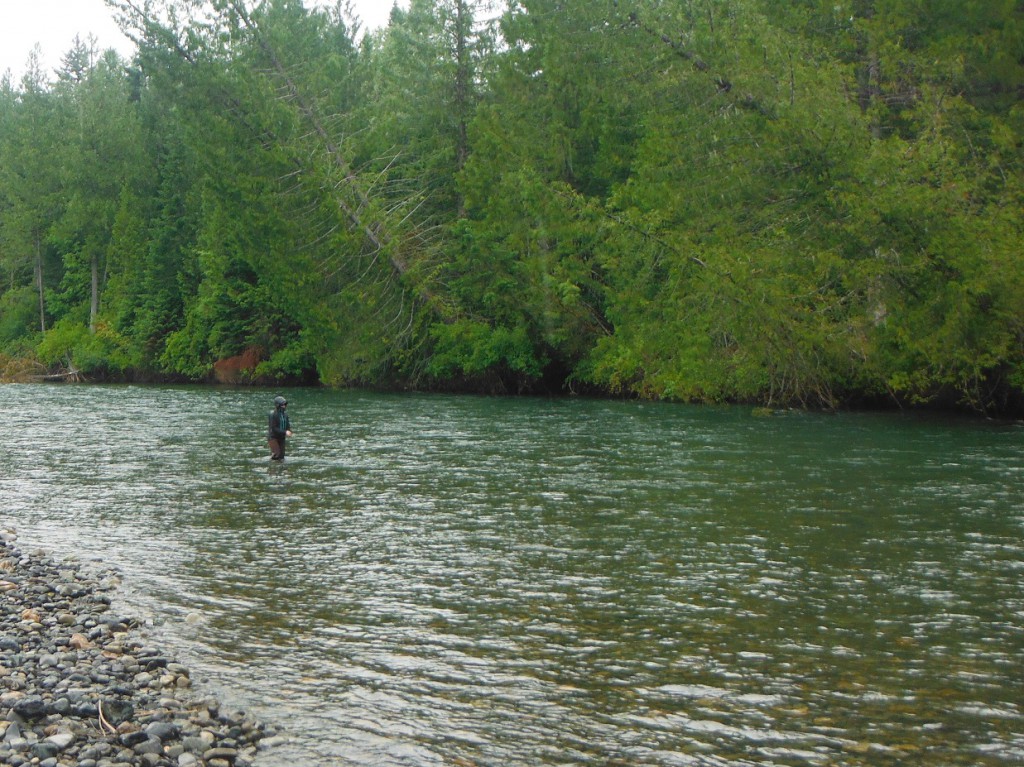 This kind of sudden spike is definitely a safety issue. Luckily the mint green water in the morning kept people from wading across to the other side of the river. This is something to always watch for but sometimes you have to see it to believe it. We watched the river levels closely during the rainfall this last Wednesday and Thursday and it does not look as though it rose as much as last week but something to keep your eye on. We still think it is well worth a trip this weekend but watch the weather and the river levels. Before the blow out we were getting reports of the river becoming more wade able and fishing was getting better.

The Thompson is still high but we had good reports of dry fly fishing above juniper beach. Down lower hasn’t been as hot but still fairly consistent around Ashcroft and Spences Bridge. If the Skagit is too high taking another hour to drive up to the Thompson can save the day, though be it a coffee drinking, red eyed drive home.

The Chehalis won’t be a bad bet for the weekend. There is no graph on this river so putting eyes on it is the only way to be sure about the conditions. It will likely come up a couple inches with the heavy rain in the Harrison area on Thursday. This should improve the fishing for both chinook salmon and summer steelhead.

It looks as though the Capilano got some much needed flow. Many of the coho staging at the mouth will have likely entered the river on Thursday. Hopefully they don’t pinch off the dam too quickly, the fresh fish need high flows to shoot through the lower river and the fish that have been in the river for a while could use a break!

Please note: ALL steelhead(adipose clipped and unclipped) must be released with the utmost care.

The most popular method for this fishery is short-floating with light/medium power casting and center-pin rods. Productive baits include cured roe, roe bags, krill, dew worms, and Colorado blades. Fly fishing is also quite effective for these early run coho. 7-8wt single hand fly rods equipped with full sinking type-6 lines allow you to strip your fly while maintaining a deep presentation. The most effective flies are olive woolly buggers, muddler minnows, and small polar bear winged flies in sizes 8-12.

The only decent lake report we have heard is from Tunkwa Lake. Tunkwa fishes well throughout the summer months. Try the Coquihalla lakes as well as they are close to 5000ft.

If you are looking to do some lake fishing for trout, the Whistler lakes are your best bet. Alta and especially Green Lake can actually fish better in the summer months. For Alta cutthroat try olive wooly buggers, and muddler minnows in various colours and flash combinations. Don’t be afraid to crack out the big streamers for Green. Large flashy rabbit strip streamers work quite well for the bull trout on the drop offs.

Andre was on the beach this past Monday and Tuesday. He saw a few fish caught on both gear and fly. You will mostly see smaller pods of fish swimming around and a fewer jumpers compared to later in the season. This is not a bad thing as this means that the fish are fresh and not showing on the surface as much. Blind casting can be very rewarding! If you don’t see a lot of fish on the surface this can indicate that the fish are either not around or they are a little deeper that day. Using weighted flies or an intermediate tip fly line will help in these conditions, especially over the next few tides as the low will be in the afternoon.

I have been spending a lot of time out on the water but I finally have a moment to provide you the latest intell. Early in our Coho season I had been concerned that the fish had sneaked past us and made it to the Capilano river after the rains we had a few weeks ago. There’s lots of fish in the river and in the fish ladder at the hatchery for you’re viewing pleasure. Since then we’ve had a pretty good dry spell with only a couple of days of drizzle and as a result more fish have started stacking up along the West Vancouver shoreline. Not only is the size of these new arrivals bigger but the odd Chinook has been hit almost on a daily basis. There are strong bites some days followed by slow days the next but overall fishing is pretty decent. I’ve been checking to see what the fish are feeding on and it’s mostly small crab spawn but I’ve recently started seeing 3″ to 4″ Herring as well. Sometimes the fish’s stomachs look like stuffed sausages with the crab they are gorging themselves on which to me might explain the odd day they don’t bite. It must take them a while to digest it all. That’s my theory and I’m sticking to it. The best choice of gear would be white hoochies in the regular and mini sizes. Anchovies in your lucky teaser heads with glo white being a good choice. If you run out of bait, 3″ to 4″ spoons will also do the trick. A lucky 3″ Kitchen Sink works for me. I’ve been finding fish from about 60′ up to just below the surface of he water with 30′ to 40′ range working best. The other day a buddy hit a Chinook 25′ on a white hoochie where as I hit one at 60′ on the same gear. 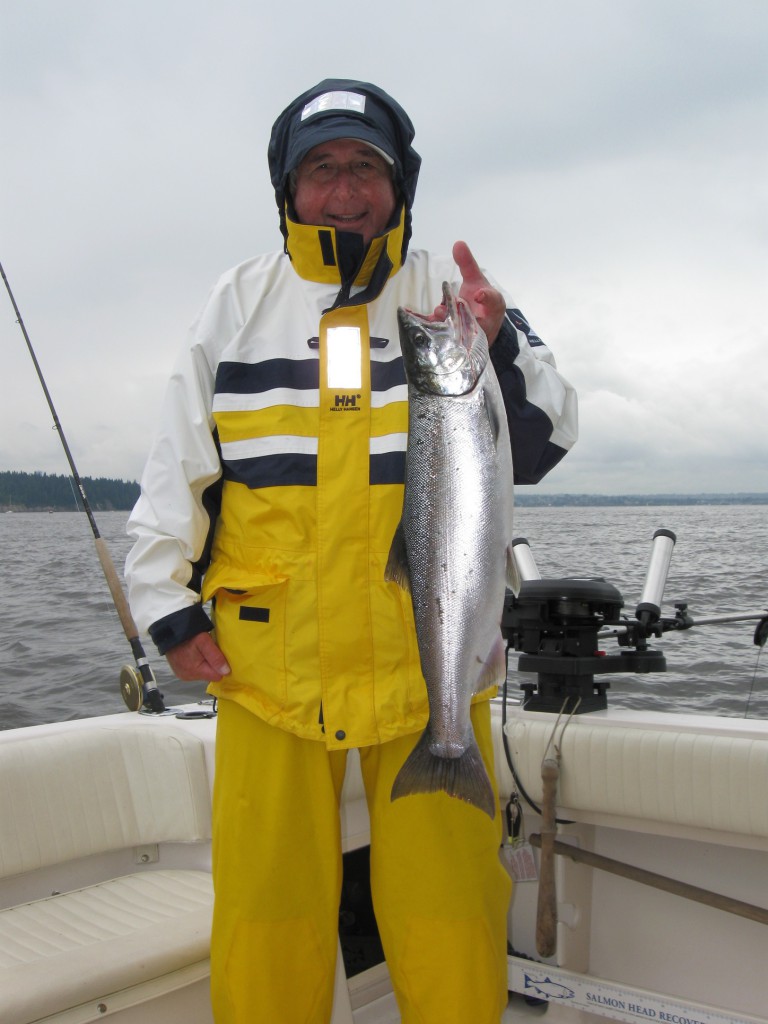 There has also been some very good days up the Howe Sound followed by some very slow days. The fish are migrating through so it a matter of being there when they are and you can have a really good day with multiple Chinook being hooked. The biggest I’ve heard of so far was 36lbs but a number of fish from the mid teens to the low 20’s are being landed. Anchovies in the 120′ and up are working over there. Clear Chartreuse, Bloody nose, The Frog, Light Spackleback teaser heads are good bets.

The “Banana” area is now open and a few boats are venturing off shore. I’ve heard the odd report of fish in that area but it will start getting busy soon especially later in August for the predicted Sockeye fest!

We are rapidly booking up in late July for the coho and chinook fishing and August is also booking up so if you are looking to participate in the sockeye fishery, make sure you call us at 778-788-8582 to book a prime time date.