For many anglers, this is a very exciting time of year. Most of our spring fisheries have ended and our summer fisheries are starting to kick off!

Warm summer weather from this past week has sent the rivers deeper into freshet and most likely past the point of return. Its time to get your boating on! This is prime time for our local lakes. If you are planning on fishing the Lower Mainland lakes, get out sooner than later. Once these lakes heat up from summer weather, the fishing becomes very slow until the fall. Interior lakes are only getting better. Lakes in the 3000ft range are still your best bet for the next week or so.

The Hump and Bowen are still kicking out some nice fish, however, those who have been making the run over to the other side have been greatly rewarded. Nanaimo to Porlier is a good bet as these chinooks are migrating down the east coast of Vancouver Island.  Our Thrasher Rock charters and south Bowen charters have been pumping out fish so call soon to book a trip!

Join us June 12 to kick off the 2014 Salmon Season and give DAD the gift he wants for Fathers day: tickets to the F3T!

We will be back in our favorite theatre, at the Norman Rothstein Theatre at Oak and 41st ave.

Net proceeds from this show will be going to a donation to The Seymour Fish Hatchery and the JCC Theatre Company.

Tickets available now online and very shortly in all your local flyshops.

Ticket giveaways from our friends at FlyBC and Fishing With Rod, so keep checking their site!

In this course students will be learning to tie a variant of “The Royal” which is a Francis Francis fly, as well as  “The Artful Dodger” which is from the book “Jones’s Guide to Norway” by Frederic Tolfrey.

If students would like to bring any copies of their books by Michael to get signed, he would be very happy to do so.

This two day course is taking place May 19th-20th 9:00am-4:00pm. For more information and to reserve your chair for this fantastic and highly anticipated event please call Jim McKinnon at 604-312-2009. 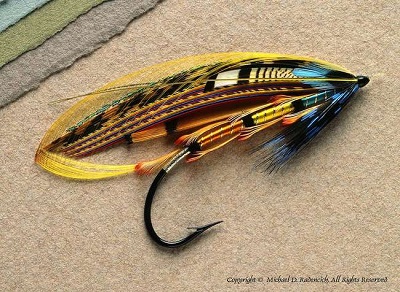 A great example of a pattern tied by Michael Radencich

Another week of warmer weather has really brought the river up, especially in the past three days. The graph on the Elaho is sitting at 4.5m which is well above what we consider a fishable level. We have heard scattered reports with some success. We have a feeling that the river is past the point of return, however, it is possible that it could come into shape for a small window.

If you are planning on going up this weekend, please be safe. We would recommend that anglers do not drift the river. That being said, we have been wrong in the past and we would love to see some pictures of the river or get a first-hand account of what shape it is in.

Squamish Cheakamus system is a100% catch and release, single barbless fishery so play by the rules and have fun!

The Chilliwack came down to a more reasonable level earlier this week. As soon as the hot weather kicked up mid week, so did the melt water. If you find yourself in Chilliwack over the long weekend, swinging a big intruder style fly in the lower river might not be a bad bet, if the conditions allow. You might just connect with a late to the party-steelhead or an early chinook!

The next fishery on the Chilliwack system will be red springs in July and August.

The Chehalis River is now closed to fishing. It will reopen June 1st.

The Harrison is at 9.8m on the graph and rising. Stay back!

Things are starting to pick up a bit. We have heard of coho salmon being caught throughout the system by both gear and fly fisherman. A good friend of the shop brought home two nice coho that he caught this week in the lower river. The coho have yet to stack up in any considerable numbers. Early June is usually when the pools start to fill up, depending on the water levels. Please exercise caution while fishing from the cliffs. 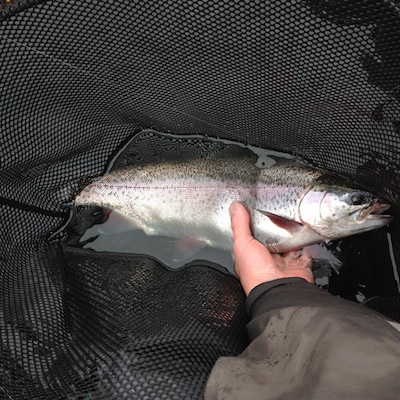 We’ve heard that Hatheume Lake, which is just outside of Merrit, has opened up and that the fish are already moving around and being active. We haven’t heard too much about the fishing, but it was nice to hear it was open.

Chicken Ranch Lake, along with both of the Kane Lakes, from reports, has been doing okay on the standard early season patterns such as scuds and leeches. We have heard a few decent reports from Englishmen Lake. The chironomid hatches are quite concentrated which means so is the bite. No sense in rushing out onto the lake in the morning but be prepared mid morning on your spot ready for the hatch.

In the Prince George area, Ferguson Lake is still covered except for a few places around the edges. Reports from the same area also suggest that Cluculz is open.

Courtney has well since turned over. Fishing has been rather challenging at times but steady over all. Anti-static bag chironomids in size 14 proved to be a successful pattern last weekend. Fish seem to be on the deeper side of things which is standard for early season.

Roche Lake has been very sluggish in turning over, however, the surrounding lakes seem to be fishing reasonably well.

We had a decent report from Peterhope Lake this past weekend. Fishing was tough in shallow but Sunk-line chironomid techniques proved to be the ticket in the 30ft range. Small flies fished deep has been the key to success.

Red Lake in the Kamloops area has been ice-free for a while and turned over pretty quickly right afterwards, but reports on clarity are still, well, quite unclear.

Rice, Lafarge, Como, Buntzen, and all the other local lakes are fishing well. These are a great option if you find yourself stuck in the Lower Mainland for the long weekend.

It is a good idea to play around with different techniques to find the most effective method on any given day. When experiencing slow fishing with stationary bait rigs like float fishing or bottom fishing, a spinner or a spoon can really change your luck.

We encourage people to take the introductory angler in their life to one of these stocked lakes. It is a great way to get people into the sport based on how willing the fish are and proximity to the city.

Stump Lake in Squamish is fishing well for smaller cutthroat trout. Because this lake is tannin stained, dark coloured bugger and leech patterns are most effective. Don’t be afraid to fish some flashy flies to target some of the bigger cutthroat that may be feeding on the invasive pumpkin seed.

The Whistler Lakes are starting to heat up. Alta, Nita, and Green Lake are all good options for the long weekend.

We have heard that some of the Pemberton Lakes are iced off and starting to fish well.

What a week it has been!  We seem to be having one of the best May chinook seasons in recent memory.  The Hump off S. Bowen has been a consistent producer for our customers on 6 hour charters but the hot days and big numbers have been on our full day charters over at Gabriola and a little N up to Nanaimo.

We can’t always make the trip over to Gabriola, so it is nice that we have been hooking fish on all the trips to the Hump.  It’s only about 20 minutes from our dock so it makes for a good half day trip.  Best depths seem to be 70-110 as the water has been fairly dirty with the Fraser River starting to freshet and the usual spring algae.  Eddie has been doing well with glow flashers and glow spoons this week.  In particular the Pesca 3.5 in Leprechaun, Gut Bomb and Italian Stallion.  We have also been catching fish on anchovies in glow green teaser heads.  The best tide seems to be the ebb tide but we have also heard of some fish on the flood.  This is a big area, so you just have to put your time in and cover water and the fish will come.

When we have been making it over to Gabriola we  have had good to red hot fishing for some nice size chinook.  We were into over 16 big chinook one day recently as well as 6 smaller ones and a handful of coho.  That makes for an action packed day!  This time of year if you are thinking about booking a charter we do strongly recommend trying to make it over to Gabriola, as it often provides some of the best chinook fishing of the whole year.  The best fishing is likely yet to come as it usually gets red hot late May and early June.

Our phone has been ringing steadily, so if you want to take advantage of this awesome chinook fishing, please give us a call as soon as possible as open dates are becoming limited. 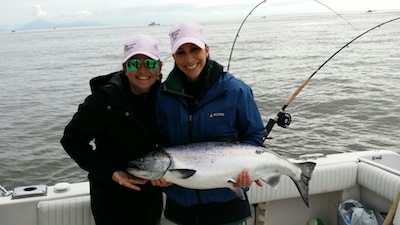 We have been hitting our fish from 75 down to 135 on the riggers on a mixture of spoons and hootchies.  The splatter back hootchies featured in our previous post have been producing well and so have all the Pesca spoons mentioned above.  Productive flashers have had some glow on them as the water has been pretty dirty.  Fish have been hit anywhere from 200 feet of water all the way out to 1000 feet or more.  So the fish are spread out and you need to cover water, find a school of fish, and then try and stay on them as long as possible. 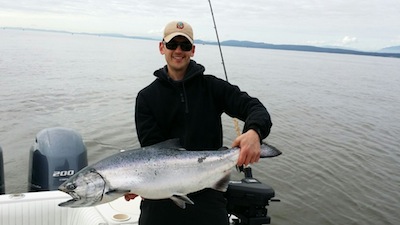 To book your trip give Jason a call at 778-788-8582.  If you are heading out in your own boat, stop by the shop for the latest up to the day report and info on the hot flashers and spoons.

See you in the shop or on the water,