Puerto Vallarta is known as a Mexican tourist hot spot – With streets filled with tacky souvenir shops, great beaches and all the amenities to cater to droves of vacationers some overlook Puerto Vallarta (PV) as a world class fishing destination. 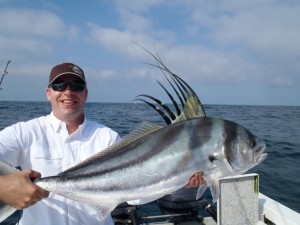 This November Jason and Matt were invited on a family vacation in Puerto Vallarta (PV).  It was planned as a non-fishing vacation but after a little research the boys realized
November was a good time for roosters and the planning began.

Matt feverously tied sardina patterns and Jason put his vast guide contact list to work.  It turned out that one of Jason’s old salmon guiding buddies, Josh Temple, has an exclusive world class operation call Prime Time Adventures in Punta de Mita only 45 minutes north of PV.  With the plan set all Jason and Matt had to do was find an excuse to sneak off for a day of rooster fishing. 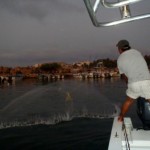 Our Guide “Lora”, grew up in Puerto Vallarta but in 2004 he got the crazy idea to travel to B.C. to become a salmon fishing guide.  He’s probably the first and only Mexican national to guide in Northern BC and speaks perfect English. More importantly he knows how to handle a couple cocky Canadian fishing guides.

The morning started with catching bait and we got to see the art of netting sardinas.  With the live wells overflowing we headed for the fishing grounds.  En route we saw humpback whales, dolphins, and jumping rays that came rocketing out of the water as if trying to fly. 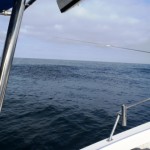 When the entire ocean began to dance with baitfish we realized that we had reached our destination – Literally, for as far as the eye could see the ocean boiled.

To warm up and get a couple fish under our belts we fished gear.  Laura used light tackle and had top of the line gear. He ran Shimano Trevally rods in the 30-80lb class with Stella spinning reels and Penn level winds, (exactly what we recommend at the shop).

The bait was set free, with no weight on circle hooks and it wasn’t long before Jason’s 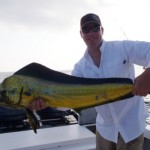 reel began to sing.  With an eye on Lora and an eye on the reel Jason waited.  After what felt like an eternity Lora gave a nod and Jason engaged the drag. If you haven’t
experienced this kind of fishing, the hook-up is kinda like pulling a parachute cord.  About 2 hundred yards behind the boat a 20lb dorado came flying out of the water and yanked Jason from his seat.

After landing the Dorado, Lora switched to focus on roosters. Again, it didn’t take long before a reel began to sing and Matt got his first rooster. Over the next 4 hours we hooked and landed 6 roosters with one double header to make things interesting.  One thing that amazed us was that Lora considered this average to slow fishing.  We didn’t complain. 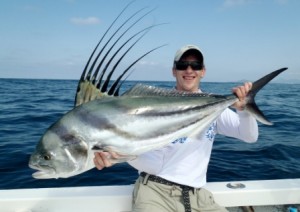 The tide dropped in the middle of the afternoon.  Lora explained that you want low tide and bright sun to move into the shallow areas were we could target them on the fly.  This seamed opposite to all our experiences but with fish under our belts, the tide
dropping and sun beaming down, we broke out the fly rods and headed for Lora’s
inshore hot spots.

If the gear fishing had been a little like sky diving – pulling the parachute cord to hook up – this style of fishing was like setting your hair on fire while skydiving.  We raced into the shallow spots with surf crashing all around.  Lora pitched out a half dozen sardinas or
sometimes just splashed water to simulate panicked baitfish.  At the same time we would false cast, waiting to drop a line on anything that might come up to
crash the bait.

At our first spot the water boiled as a big school of Jacks slashed up the bait. 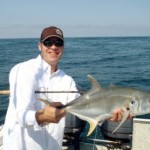 Holding on for dear life Jason laid out a perfect cast between the 8ft rollers coming off the reef. If casting wasn’t hard enough, stripping in these conditions was frantic.  With Lora yelling faster – faster – faster, and the fly ripping across the surface, three different fish came shooting out of the depths behind the fly.  Twenty feet from the boat the water exploded. All Jason could do was hold on.

Though we wanted roosters, jacks are a great game fish and should never be passed up.  They pull hard and don’t give up.  The average size that we saw ran 8-12 pounds.

With the jack landed we made another pass and Matt had an awesome shot at the first boiling rooster.  The fish’s plumes came clear out of the water.  Matt striped as fast as he could and the fish slashed at the fly three times but did not hook up.  Both Jason and Matt were left speechless as Lora came around for one more pass.  Unfortunately the fish had moved off and it was time for another spot.

At the next location Lora employed another tactic.  Racing in to the spot, Lora cast a huge popper a country mile into a reef where we couldn’t maneuver the boat.  He then began to reel as fast as he could.  A second or two after making the cast all hell broke loose behind the 6 inch long blue and silver popper.  A rooster, a 4 ft long needle fish and a jack all tried to take down the lure.  They looked like three torpedoes coming straight for the boat.  At about 50ft Matt and Jason shot casts just as Laura pulled the popper out of the water.  The rooster slashed first at Jason’s fly then at Matt’s but the needle fish and jack hit a split second behind the rooster and both Jason and Mat were hooked up.  Unfortunately not with the rooster!  This all happened in a matter of seconds leaving heads spinning and rods bent to the cork.

We hit three more spots and at every location we saw action from Jacks, roosters or needle fish but we couldn’t convince a rooster to hold on.  At the last spot, just as we were about to throw in the towel, Matt spotted a rooster slashing bait off the backside of the boat.  With a frantic backhand cast he hit his mark.  Stripping like mad, the fish slashed once then twice then three times almost pulling the rod from Matt’s hand on each pass.  The hits started from 70ft out and the fish followed all the way to the boat.  As the fish spooked from the side of the boat, Laura tossed Mat the popper rod and the second the popper hit the water the rooster crushed it.

For our first experience with roosters we were left stunned.  Some knock the bait-and-switch method but it is fast, exciting and extremely challenging.  We came to the conclusion that we would choose it over blind casting. 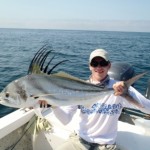 We landed 7 roosters on gear and had 4 solid takes on flies as well as a handful of aggressive follows all in one day. Seeing the plume of a 30lb rooster coming out behind your fly was worth the price of admission.  Needless to say we are already planning our next non-fishing family vacation to PV.

What we Learned and What you Need to Know

If you plan do try this style of fishing be prepared.  We fished heavy 10wt rods and though many people recommend sinking lines in the intermediate or heavy sinking versions we found that for the bait-and-switch method, a floating line with a long fluorocarbon leader was best for fast accurate casting (see the previous article on testing out the new Sage “One” for rod recommendations).

You will need to be able to cast 50-80ft in tough conditions.  Double hauling is important.  Though the seas were not considerably rough, you need good balance to cast in the rollers.  If you have a problem with sea sickness don’t rule out this kind of fishing but talk to the guides and try to pick a calm day.  If you have had mild nausea in rolling seas but managed then you would not have a problem.  The area of Punta de Mita is relatively protected but on a rough day or if you are very prone to seasickness we would recommend caution. 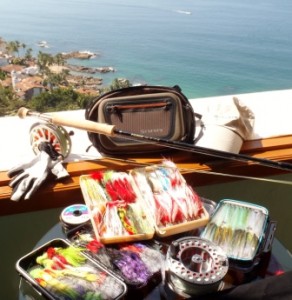 We used 25lb test and the flies were blue and white or green and white.  Like any first experience with a given fishery we made mistakes.  We tied our patterns with too much flash.  In the high Mexican sun and emerald green waters even simple polar bear, bucktail or unique hair glows.  Only a little silver, white, blue or green flash was needed.  Too much flash turned the fish off.  We also tied our patterns too small.  We would recommend 3-5 inch patterns with deep bellies.  Our patterns were generally too skinny 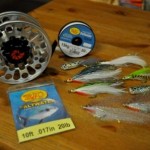 and short to properly imitate the sardina baitfish.  Poppers were also something that pleasantly surprised us.  We had poppers in the box but we wished we had more.  If you want to see the fish slashing the surface, fishing poppers was almost as productive if not more productive than the sub-surface bait patterns.  We preferred ones with rattles in the same blue or green colors.  A trick that we learned and impressed our guide was using a riffle hitch like on steelhead dry flies to give the popper a more erratic darting action.

The last thing that we recommend for tackling this style of fishing is practice.  Work on your cast and more importantly practice stripping fast.  It was a real work out casting, then stripping as fast as humanly possible.  If a rooster was following and you slowed down or god forbid your finger slipped, missing a strip, the fish would reject the fly.  At home or on the beach the day before, or even in the boat during a slow time, practice casting as far as you can then dropping your rod tip and strip as fast as possible.  We even played with putting the rod under an arm and stripping with both hands.  We also employed the rod to pop the fly like a bass fisherman pops a crank bait putting more action on the fly and producing better hits and follows.  Practice all these techniques until you are comfortable.

When the pressure is on and things are moving at 90 miles an hour the more comfortable you are with the process of long fast casting and aggressive stripping the less mistakes you will encounter.  When the plume of a 30-50lb rooster is coming out of the water behind your fly it is way to easy to screw up.

Because of this hell bent stripping, finger guards or a stripping glove is essential.  If you have a stripping basket bring it as well.  Though not necessary it is useful in the boat as well for any shore/beach fishing you might try.

If you are heading down to Puerto Vallarta send us an email or come by the shop and we will set you up with the gear you need.  Even if the fly-fishing sounds a little too daunting, give the inshore gear fishing a try.  If you want to tackle monster tuna, marlin, dorado or sails we will put you in contact with Josh and Lora.  We can promise that they will take care of you.  The pricing for the inshore fishing is $600 plus tip for a full day.  We recommend one, two or three anglers in the boat as to not overcrowd the decks. We only did one day.  If you want a chance to learn and experience the fishery 2-4 days would have been perfect.  The off-shore fishing is a little more expensive because of long runs to the fishing grounds but you could have up to five anglers on board and fish for huge yellow fin tuna.

Posted on December 1, 2011 by Jason in Fishing Articles, Fishing Travel/Adventure