The steelhead’s ‘take’ is a culmination of dreams, practice, and patience.  The phrase, “The tug is the drug” sums it up well. The only problem is that like all drugs, the tug comes with a price. Like a junkie with a case of the DTs – or a hangover after a long night of celebration, there is nothing worse than the feel of slack line when the tugging has stopped. 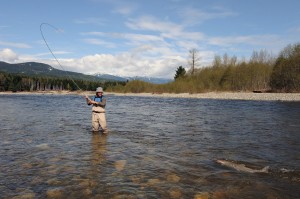 Tug is the drug…overdosing on steelhead

No matter how skilled, every steelheader misses takes. It cannot be avoided. This said, I have found that experienced anglers employ a number of simple techniques to avoid the DTs of missed takes.

The first step to increase hook up ratios, is to understand what is happening under the water when you feel that wondrous pull.  Though there is no end to the verity or timing in a steelhead’s attack, the classic ‘take’ can be broken up into three distinct parts – what I call;  the FLARE, the KILL, and the TURN. All takes (no matter how varied or unique) contain some or all of these steps.

1) The Flare: The steelhead follows your fly, opens his mouth and flares his gill plates.  For the most part, what you feel on the first pull is not his mouth but the rush of water as he tries to suck in his prey.  This can happen repeatedly, felt in the rod as a series of pulls – Tug-tug … tug-tug… tug-tug – very subtly in a gentle pause, or rapidly with one rod bouncing pull.  Do not be fooled! The steelhead has not taken your fly.  DON’T SET THE HOOK.

2) The Kill: The second series of tugs or pauses is produced when the steelhead closes his mouth to disable his prey.  This can take a number of forms.  Sometimes it is a combination of biting, gill flaring and head shaking, felt in a series of violent erratic pulses increasing in tempo.  During this process, the steelhead may bend the rod though he is still not committed to the fly.  The exact opposite can also happen, sometimes they simply close their mouths and hold in the current.  It can be felt by a long pause with an increased pressure on the line.

3) The Turn: The last solid pull is the feel of him turning his head to run.  It is usually followed by a singing reel and those wonderful two words “fish On!”.

Though I could write a short book detailing the endless variety of takes, the angler should try to recognize the simple events of FLARE, KILL, and TURN.  In understanding these steps, we can begin to analyze problems that cause the dreaded Steelhead DTs.

What you feel is not always lip on fly… so DO NOT set the hook!  During the flare and the kill, setting the hook will very rarely result in a landed fish.   I know it’s hard – we have all done it – but hold back those well tuned trout fisherman reflexes.  For the ideal hook placement (in the side of the mouth), the steelhead needs time to suck the fly, immobilize it, and turn.  If you set on the flare you simple pull the fly away from the fish.  Even worse, if you set while he is closing his mouth or shaking his head, it is very easy for him to feel the point of the hook, open his mouth and spit the fly

Line tension…in many situations (heavy current, when the line is ‘dangling’ straight down stream or with a hesitant fish,) the tension of line can make it difficult for the steelhead to suck the fly into his mouth and turn.

He flares his gills – he may even move to turn – but feels the resistance from line tension. This is unnatural and can cause him to give up on the attack.  To overcome this, the angler must use what is called a shock absorber.  A method to absorb the shock of the flair, subsequent head shakes, and turn so that the steelhead feels as little line resistance as possible.

There are three ways two accomplish this.  They are:

Method No. 1 – During the swing, the tip of the rod is held a few feet off the water.  In the same way, a trout angler holds his rod tip in the water to reduce slack, this gap gives the steelhead the few inches needed to close his mouth and turn.

Method No. 2 – Hold a loop of line with your stripping finger.  Eight to twelve inches is enough.  When the first pull (or pause) is felt, the angler releases the finger, allowing the steelhead to suck and turn.

Method no. 3 – This is one that takes more skill and experience. Instead of giving line, the angler uses his hand and arm to pointing the rod tip to the fish giving slack during the initial pulls.

Many late night, scotch-induced debates, have raged over what method is best.  I personally use a combination of all three.  The key is to understand the concept and mechanics of the ‘shock absorber’ and apply the method that is most comfortable.  Very few can argue that it does not put more steelhead on the end of your line.

Sharp Hooks…though this problem is self-explanatory, I wanted to take a moment to rant. Always check your Hooks!  We have all had the experience of missing a take, only to find the hook dulled or worse broken off. The most successful anglers assume this will happen and make a habit of checking hooks at regular intervals as they travel through a run.

Every time you feel the bottom…. Check your hook!

Every time you hear your back cast catch a rock…… Check your hook!

Every time you reel in to move to another run…… Check your hook!

I know it is time consuming and wastes valuable fishing time, but if you are working a dinged up hook, what’s the point of casting?

There is a trick that can help cut down on the time it takes to check. The technique sends the fly sailing back at the caster so that he can catch the fly, check the leader and make sure the hook is sound.

So now that we are armed with the knowledge of what is going on under the water, and we are confident that our hooks are sharp at least for 90% of the time, how should you deal with your next spine tingling tug?

Stay calm.  Drop your loop. Wait until he/she is pulling line from your real then raise your rod tip with slow yet firm movement.  With the rod above 45 degrees and still producing a solid bend, give a short firm hook set, apply side pressure, and let the fun begin.

If you find your hand begging to creep up as the tugs become more fervent. Don’t worry…continue raising…but keep it very slow.  At 45 degrees if the rod is well bent don’t worry about waiting for line coming off the real, pop him, and apply side pressure.

If at any point during this process the bend in the rod is lost, drop the rod tip to the water to give the fish time to turn.  When the dreaded DTs do hit – and they will – do not loose faith. Do not speed up your hook set and try to enjoy the tug. Check your hook and give him another go. Remember, each missed fish only makes the ones that stay buttoned that much better. 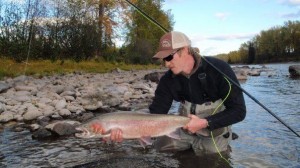 Posted on February 7, 2012 by Jason in Fishing Articles