With any luck Mother Nature is about to catch up with summer and give us conditions conducive to better fishing. British Columbia is still recovering from an above average snow pack and a nonexistent spring.  However, there are a few fisheries benefitting from a late summer.  The Pacific Angler staff is expecting August to be a great month to be on the water. 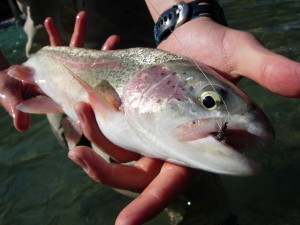 A beautiful rainbow caught in an unknown river.

The Environment Canada forecast for the Vancouver area is calling for sunny conditions with daily high temperatures ranging from 23 to 27 degrees Celsius.  Yeah, it is going to be an amazing weekend to be on the water, and plus it is a long weekend!

The story for this week is the dropping river levels.  We will discuss this in detail in the report below.

The Pacific Angler staff will expect to hear good reports from the Skagit and Thompson Rivers soon. Dave was able to fish the Thompson River last weekend and see if there were any hungry trout hanging around.  Unfortunately, the river was still too high.  Consequently there was very little water to fish effectively.  The good news is that the river is dropping every day.  It is simply a matter of time before the rivers get to a good, fishable level.  The Thompson River may be productive this weekend for trout but the following weekend should definitely be good timing.

The staff has also heard of good reports from the Vedder-Chilliwack River fishing for chinook salmon.  If you are after trout fly fisherman you can also expect some productive hatches on the Vedder River at this time of year.  We have also noticed that the water levels along the Sea-to-Sky Corridor have dropped down considerably.  The staff has not heard of any recent reports from this area but it could be worth a shot if you are after trout.

Dave had a chance to talk to the local fly shop in Little Fort.  Their staff confirmed that the rivers in the Clearwater area are still at above average water levels.  They mentioned that June had been very wet for them.  If you combine the wet weather with an above average snow pack and you’ve got some very high water levels.  The staff also confirmed that lake fishing in the area had also been good in the higher elevation lakes.

I also had an opportunity to take up some clients to the Upper Pitt River.  While the past week had been productive the river level had dropped significantly over the weekend and has continued to drop.  Fishing was tough due to the increase in water clarity.  This is unusual and not expected.  The glacier should still be feeding cloudy water into the system.  I am predicting that the water level will rise again once we receive some warmer weather on the weekend and making for some good fishing.

The staff has heard the Fraser River chinook salmon fishery has been good as well as sturgeon now that the water has started to drop.  Try areas from Chilliwack to Hope using bottom rigs on the gravel bars.

This week in the lower Skeena region near Terrace, a cooling trend has helped river levels drop significantly, and conditions are much improved.  The mainstem Skeena has dropped over one metre near Terrace, and many bars are now starting to take shape.  Tributary rivers have also followed suit. 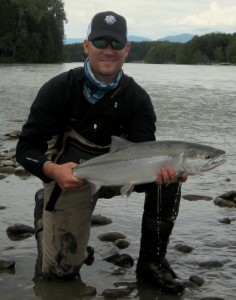 Chad with a chrome sockeye salmon!

If you’re looking to keep an eye on water levels on the Skeena and other rivers in the province, I’d highly recommend checking out the Canadian Water Office site, at:  http://www.wateroffice.ec.gc.ca/text_search/search_e.html?search_by=p&region=BC.  It’s a great resource that allows you to track river levels over the course of the year. While it’ll take some experience learning where the different benchmarks are for the best fishing, it gives you an additional level of information when planning your next trip, or simply checking out what your favourite river might be doing.

This is the last week of our trophy Chinook season (closure on August 6th at midnight), and while overall numbers of Chinook returning to the Skeena system have been lower than normal, we’ve still had some good days on the river.  Two days ago, guide Greg Buck helped his clients get into ten Chinook while backtrolling, with eight landed to 35 lbs.

Sockeye numbers have continued to be quite high this week, and with a much larger than average size this year, have provided some outstanding fishing.  In most years, these fish will average 4 to 6 lbs, this year the average seems to be closer to 7-8 lbs.

And, perhaps the best news of all – Steelhead numbers at the mouth of the Skeena are shaping up very well indeed!  While the numbers aren’t quite as high as the 2010 season – the best season by far in the last decade – they aren’t that far off and this is good news for both our Summer Steelhead fishery on the mainstem, and our Fall fishery on the tributaries.  You can bet that we’re excited and looking forward to this!

The boys at Nicholas Dean Lodge are avid steelhead fishermen and come highly recommended from Pacific Angler.  If you would like to plan your dream steelhead adventure do not hesitate to contact Dave or Jason at Pacific Angler (604-872-2204; mailto:bookings@pacificangler.ca).  Alternatively you can contact Chad Black directly at info@nicholasdean.com.

Although temperatures in the interior have been relatively hot the staff are still hearing of some okay fishing reports from “Lake Country”.  If you are planning a lake trip to the interior try to focus on high elevation lakes (+4,000 feet) as they get less affected by the heat.

The staff has heard reports of water boatman hatches as well as good fishing with bloodworms in the deeper sections of the lakes (+30 ft.).  A good strategy for this time of year is to focus on the early morning and evenings and then go deep in the middle of the day. Full sinking lines with dragons, leeches and boatman would be our recommendations.

While Dave was on a “hiking trip” this past weekend in Wells Gray Park (Clearwater) he able to do some scouting for future fishing trips.  He was camped along the shoreline of Clearwater Lake where the outflow is.  He confirmed from local fishermen that fishing had been tough.  Mayfly nymphs had been good with mayfly hatches occurring as well as the odd stonefly hatch.  Clearwater Lake is legendary for the large stonefly hatches throughout all of July. 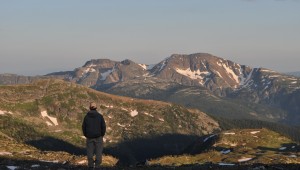 This is a place I hope to visit later in the fall for both the lake and river fishing.  And plus it is a beautiful part of British Columbia to take a holiday with the family with many different activities to enjoy.

Fishing in the saltwater off the mouth of the Fraser should heat up any day, at least that is what the Pacific Angler staff and guides are hoping for!  The Howe Sound area has remained productive with a few nice chinook salmon being caught.  The West Vancouver area has also perked up for coho salmon.

The truth remains that all saltwater anglers are waiting for fresh fish to roll into our local waters.  This usually occurs around the first week of August when the first Fraser River red chinook salmon show up along Spanish Banks and the mouth of the Fraser River.  The “Salty Dawg” will be out all weekend.  Hopefully the Pacific Angler Saltwater guides will have some positive reports with pictures of big chinook salmon to the boat!

You can expect a thorough update on the “Guide Journal” after the long weekend by Jason Tonelli and Pacific Angler head guide Eddie.  If you are heading out this weekend areas to focus on will be the shoreline of West Vancouver for coho (spoons and hootchies) and the Bell Buoy area for chinook salmon (anchovies with a teaser).  If you have any questions or need to stock up on tackle please do not hesitate to drop into Pacific Angler, 78 East Broadway.

Local beach fishing is officially underway.  West Vancouver (Ambleside) has been fishing well for coho on the fly on the low tide.  Small spinners (Blue Fox’s in Blue Chartreuse, Orange, and blue) have also been very productive off the beach for coho salmon.  If you are targeting chinook salmon off the beach then larger Colorado spinners will be your best bet.  For this area you want to focus your fishing around 3 hrs before low tide and 3 hrs after low tide.

The Pacific Angler staff has heard good reports from Nile Creek.  It sounds like the pink salmon are now present in good numbers this last week.  The summer steelhead fishing should also be productive at this time of year.  If you enjoy exploring unknown rivers that rarely see fishermen and have wild steelhead then you should plan a trip to this part of British Columbia.  Come into Pacific Angler to talk to the friendly staff and explore the possibility of this fishery.

Saltwater fishing has also bee excellent on the west coast of Vancouver Island with good reports coming from the Tofino area for chinook salmon and halibut.

On behalf of the Pacific Angler staff I genuinely hope you enjoyed our Friday Fishing Report.  If you have any comments, recommendations or feedback please do not hesitate to contact the friendly staff at Pacific Angler by phone (604-872-2204) or reply to this email.

Posted on August 3, 2012 by Jason in FIshing Reports