For the fishermen we tend to look at the calendar not in months but in fishing seasons.  As Christmas marks that time of year to be merry it also marks the beginning of the winter steelhead season throughout the lower mainland.  Yes, December is one of Pacific Angler’s favourite months.  The anticipation of catching that ever-elusive first chrome steelhead of the season is what it is all about.

So far for the month of December the weather has been in our favour.  After a very wet and mild October and November, December has seemed to be much drier but more importantly cooler.  So when the Lower Mainland has received precipitation it has been in the form of snow in the mountains and not rain.  This is important to because it affects the water clarity and fishing conditions in our rivers.  Instead of the rivers blowing out from the precipitation they remain in good shape because all of that moisture is in the form of snow stays in the mountains.  However, there can be too much of a good thing!  The Pacific Angler staff has seen the river levels drop considerably and are hearing reports that the rivers are low and clear.  The difference on these days can often be smaller presentations with lighter tippet.

The Vancouver weather forecast is calling for cloudy and rainy conditions throughout the weekend and following week.  The daily high temperature will range from 4 to 5 degrees Celsius, while the daily low temperature will range from 0 to 3 degrees Celsius.  While we are expecting some rain on Saturday and Sunday it shouldn’t affect river levels too much.  However, it is always a good idea to check your river levels before you head out in the morning to make sure they are at a safe and fishable height.

Since steelhead will be the focal fishery over the next few months we will be giving you one “Pro Tip” a week to help you hook into a fish of a lifetime.  Here is number 1: Cover Water by Jason Tonelli.

“A key to successful steelheading is to cover water.  When I am guiding I am always yelling at people telling them to move.  If you are fly-fishing or gear fishing you must cover the maximum amount of water in a day.  The less pressured the water the more aggressive the fish are and the more water you should cover and fish fast.  If the fish are pounded slow down a bit, cover the water thoroughly and change up a few times.” 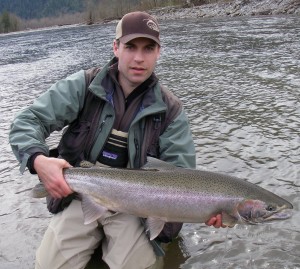 For a detailed look at Vancouver’s river fishing scene and updates on the saltwater scene please read the reports below.  If you have any questions do not hesitate to contact our friendly staff @ 604-872-2204 or better yet, drop by Pacific Angler @ 78 East Broadway.

For a complete river fishing report compiled by the Pacific Angler staff please read below.

Chilliwack River: It’s December and every year there are some winter steelhead around. With the salmon season past us, it’s now time for the cold, the rain, and the chrome. Typically in December the last week around Christmas Day until the new year is the best timing, but fish will trickle into the river throughout the month. We’ve heard some whisperings of fish so far. This is the time of year when the fish are at their physical peak, and are ultra aggressive.

Chehalis River:  A few chrome coho will continue to enter the river, right through until the first week of January. The river tends to run low and clear unless there is heavy rainfall or snow melt. Some steelhead will be in the river currently, a mix of both summer and winter run fish. Single eggs, roe, spawn sacs, small gooey bobs, etc. are the ticket.  Fishing with an overall lighter setup, will help catch these fish in the clear water conditions.

Fraser River: Pacific Angler have not heard many reports from the Fraser System. The salmon season has come to an end and the sturgeon are now in their overwintering holes and are best left alone. There have been a few good cutthroat trout reports throughout the Fraser System. The cutthroat are migratory fish and travel in schools. The trick to these little jewels is to cover lots of water in search of these schools. Productive patterns at this time of year are flesh and egg patterns as well as sculpin and stickleback patterns.

Squamish River:  The river has been low for the last few days, making for some tough conditions. But prior to the cold snap, the higher water levels produced some great fishing. This next week of showers will raise the river, and fishing will improve drastically. Nymphing egg or flesh fly patterns for the bull trout and rainbows is the traditional plan of attack for this time of year. Another great way to target them is swinging or stripping streamer or Sculpin flies on sinktip lines. They can elicit some great bites.

Capilano River: Vancouver’s most local river fishery should not be overlooked at this time of year. If you want to squeeze in a morning of fishing before family dinners the Capilano River can be a great option. While the winter steelhead run is not as strong as some of our other hatcheries, there definitely is a possibility of catching a steelhead. We usually hear of the very first reports in early to mid December.

Stave River: The chum salmon fishery has been over for a while on the Stave River and while there are probably a few odd coho in the system the focus of this fishery now will be cutthroat trout and some bulltrout. This river is fairly short and close to Vancouver so is a great option if you just have a half day to fish. In regards to steelhead, the bulk of the run doesn’t show up until later in February and March.

The staff have not heard much from the Vancouver saltwater fishing scene and currently have no recent reports. Dave talked to Pacific Angler saltwater head guide yesterday and he had not heard of any guys out on the water over the last two weeks. However, right around Christmas there is a core group of saltwater addicts that head out for a couple days in search of the first winter chinooks.

I remember last year when we had our boxing week sale we heard a flurry of good reports of fish being caught in the Vancouver harbour. If you are thinking of getting out for a day or two for the holidays make sure to drop by the shop or give Pacific Angler a call at 604-872-2204 and talk to one of our pro-staff.

Successful setups are your favourite flashers (Oki Big Shooter Kinetic, Jelly Fish, UV Green flasher, etc.) and spoons in the 3.5 size. The winter chinook are feeding on herring at this time of year so spoons that resemble a herring seem to be most productive. Examples are Green and Glow and Knight Rider in size 3.5. When fishing in the Vancouver harbour off the West Vancouver shoreline you want to fish right off the bottom.

And remember if you get a solid hook up make sure to try your best to get the fish in the boat as soon as possible as the seals will be right on it.

Posted on December 14, 2012 by Jason in FIshing Reports