This past week has been a good one for the local Vancouver fishing scene.  For river anglers steelheading has continued to be good on the Vedder River and our staff saw the first fry out and about in the backchannels while fishing for bulltrout and cutthroat trout. 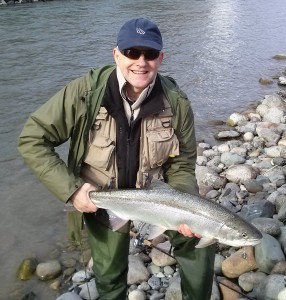 Ian took our steelhead course a few weeks ago and is putting his new found knowledge to good use. On a recent trip to the Vedder he noticed everyone was fishing roe bags, prawns, and pink worms. He knew from the course that is was time to show them something different so he put on a #3 hammered silver colorado blade. He proceeded to catch two steelhead including this 11.25 hatchery doe! Nice job Ian!

For the saltwater anglers the local Vancouver harbour has finally perked up a bit with a few legal winter chinook being caught.  The encouraging news is that while fishing has remained good, it can still be a lot better with a few changes in the conditions.

It is no secret that February has been an extremely dry month.  While Vancouver received some rain last week we still need a good amount of steady precipitation to come through the coast to drive the river levels up, push in fresh fish, and get the eggs moving downstream where bulltrout and cutthroat trout can feast on them. 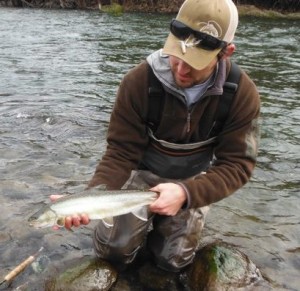 February has also been relatively mild this year, possibly causing some fry to emerge earlier than we are used to.  It will be interesting to see when the peak of the fry emergence will occur this year.  Pacific Angler head freshwater guide, Matt, recommends using an alevin pattern underneath an indicator at this time of year.  He has had some of his best days on the water with this technique.

The marine weather forecast for Straight of Georgia is calling for northwest winds over the weekend.  You can expect some stronger winds on Saturday (25 to 30 knots) but then backing down on Sunday and then turning to a southeast wind.  If you are going out fishing this weekend definitely make sure to check the latest reports as conditions can change rapidly on the ocean.

To keep up-to-date with all things Pacific Angler and the local fishing scene check out Pacific Angler Facebook and on Twitter.  You will find our detailed river and saltwater reports below.  If you have any questions please do not hesitate to drop by our shop @ 78 East Broadway, Vancouver or give our friendly staff a call @ 604-872-2204.

Squamish/Cheakamus Rivers – The access to the river has improved and we have been getting reports that fry are starting to show themselves. This is early for fry, but because of the relatively warm weather we expect them to really start hatching over the next 2-3 weeks. 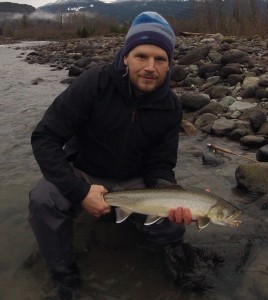 Egg fishing is still going to produce fish but right now we recommend alevin patterns fished exactly the same way we fish eggs, under an indicator. Use the standard indicator rig with split shot and tumble the alevin or small fry patterns. When fry first hatch, they can barley swim and tend to stay in the gravel.  If they get washed out of the gravel they are helpless to predators.  For a very brief time alevin will be the food of choice for bulltrout and rainbows.

We also had some good sculpin reports from last week. Sculpin are the best searching pattern on the Squamish/Cheakamus Rivers.  If you are exploring big wide-open runs fish them with a sink tip and short leader on a swung/stripped fly presentation. I will be out this weekend and will have more updated reports early next week. 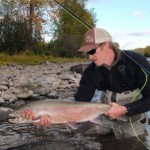 Capilano River – The Capilano River has been slow for most of this season and it is a symptom of a very low water year. We had friends out on the water on Wednesday and they fished hard and covered water but did not see anything. We would love to start hearing some descent reports from this system. We spoke to the guys at the hatchery last week and they confirmed that is has been a slow year.  Hopefully we’ll see a late push of winter steelhead coming into this system in February and March.

Seymour River – We have had a lack of good reports form the Seymour over the last few weeks. There were some early reports back in January but nothing lately.  Much like the Capilano the low water is affecting the fishery.  However, for Vancouver fisherman the Seymour River is a great option to get out of the house and onto for river for a couple of hours either before/after work or on the weekend.

Fraser River – The Fraser River has remained fairly slow for sturgeon, as is normal for this time of year.  We have heard of a few cutthroat reports and fishing seems to be fair to good if you can find the fish.  That is one of the fun things about cutthroat fishing, it is more hunting than casting, moving from spot to spot by foot or boat, in search of feeding fish.

It feels early, and it is, but there are already some salmon fry showing up in the local rivers.  We have seen some when we have been out personal fishing and guiding, so it is only a matter of time before we start to see some in the Fraser as well.  The relatively warm winter seems to be producing some early fry.  This could really make the cutthroat fishing pick up.  The last few years fishing for cutthroat in the Lower Mainland has been great, which is nice to see, and it looks like we are on pace to have another great year.

We are doing a tying course for salmon fry and we have some cutthroat courses as well. 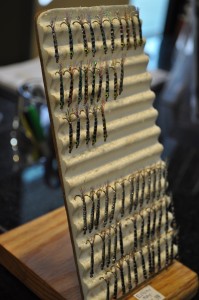 The epoxy course is Tuesday March 5th starting @ 6:30 PM.  We still have some availability.  Click on the link to view the Pacific Angler 2013 Course Schedule for Andre’s famous cutthroat fishing course.  Andre is a very passionate cutthroat angler and he will be teaching both courses.

Chilliwack/Vedder River – With the latest dry spell upon us, the Chilliwack remains low and clear.  With fresh fish trickling in, the opportunity for good fishing is still there. The more rain we get in the coming weeks, the better. Small presentations such as roe bags, deli shrimp, Jensen eggs, and wool ties are the baits to use when the river has lots of clarity.

For the fly fishermen 1.5-2.5” leeches in pink, orange, black & purple work well.  Travis was reading through some of past blog posts and came across the article on how to tie Sharp’s Black & Blue. Check out the picture of Travis’s first attempt at the fly below. Nice job Travis! This fly is a well know producer for summer steelhead but it is also an excellent choice for low water winter steelhead conditions like we are experiencing right now. 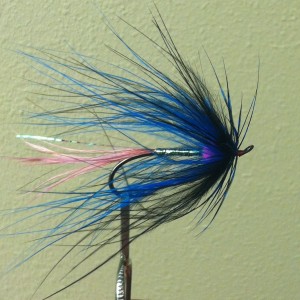 If you are fly fishing make sure to complete the swing to the hang-down position.  You’ll often get a steelhead following your fly all the way to the bank and then turning on the fly right at the hang down.  This is the toughest position to get a solid hook up as your first instinct is to set the hook.  Don’t, let the fish take a couple of inches of line until you can feel the weight of the fish and then pull back – FISH ON! 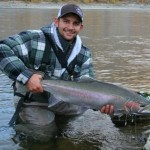 Chehalis River – With the lack of precipitation, the Chehalis is low and clear. The fish that are in the river have made their way into the security of the canyon. With deep pools, and lots of cover, they will hunker down until we get another rain storm to move them around and bring some fresh fish into the system. Presentations such as single Jensen eggs, sparse jigs, or sparse flies such as “General Practitioners” are all great options.

Stave River – The boys at Pacific Angler have heard some solid steelhead and cutthroat trout reports.  The backchannel can be the place to be as well as at the top near the dam.  The fry should be hatching right about now.  Because of the damns influence, the water is considerably warmer all year winter, in respect to the other systems.  I am expecting to hear good cutthroat, bulltrout and steelhead reports over the next couple of weeks.

Harrison River – Due to the warm winter temperatures that we have been experiencing this year, you might find that a few salmon fry hatch earlier than expected. Having said that, the majority of the hatch is around the first week of March.  By the second week of March the migration of the fry starts.

It is then that the Cutthroat will leave their spawning beds and are ready to feast on the fry.  In the meantime it is best to fish stonefly and Mayfly nymphs if you happen to find a few Cutthroats that are lurking around during their pre spawning years. Concentrate on little side creeks of the main stem of the Harrison River. The next few weeks will be the slowest time to find these magnificent and elusive fish. 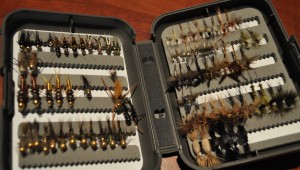 Therefore, in order to increase your chances of finding a few fish, you must cover a lot of ground. In the meantime, to get ready for one of the most exciting fisheries, you can tie coho and chum fry patterns as well as Sticklebacks and a few attractor patterns. Also, don´t forget to tie some dry flies (March Brown) as they hatch with warmer temperatures. 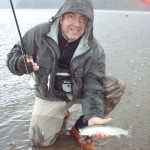 There is still lots of bait in Vancouver Harbour and in the last few days there have been some fish being caught on the flood tide, finally!  It is not red hot but I was glad to hear of a few fish the other day on the morning flood.

The water is still clear and anglers are using small spoons in 3.0 inch size in a variety of green, black, and glow colours, like Irish Cream, Cookies Cream, Green Glow, and Flaming Hans.  We had a few days “on the other side” this past week that were a lot of fun.  Mostly small fish but lots of bites and a few nice ones that we kept.  The action died  off over the weekend and some colleagues headed towards Thrasher in search of fish as well, but not much too report.  Such is winter chinook fishing, hear one day, gone the next!

We haven’t heard too much from Howe Sound either, a few fish here and there for the anglers willing to put in the time.  Crabbing has picked up, there are some nice ones in the traps these days.  Prawning has also been decent.  The winds don’t look too bad this weekend and there is a nice high slack in the morning so it would be a good bet to try local waters and set some crab traps. 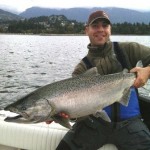 Posted on February 15, 2013 by Jason in FIshing Reports