It’s hard to believe we are almost through January and heading straight into February.  Vancouver’s 2 months of winter is just about half way through.  I say that being from Ontario where you can still have two feet of snow in March.  Living in Vancouver, we are truly lucky to have prime time fishing all year long.  Whether it is winter steelheading from December to May, lake fishing in the spring and early summer, river fishing for rising trout in August or salmon fishing off of Thrasher Rock in May.  There are always a few tails to chase in BC!!!

We are in the thick of the steelhead season at the moment.  The Steelhead Society of British Columbia is having their AGM this Saturday.  This is always a clear sign that the steelhead are in our rivers as you usually hear stories of large fishing being caught in the lower mainland, Vancouver Island, Washington State and a handful of other spots while at the AGM. 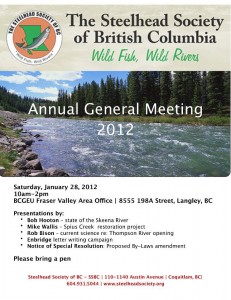 The forecast for this weekend and the following week is the usual for Vancouver at this time of year.  Chances of showers throughout the day with overhanging cloud.  On Friday and Saturday the high will be floating around 6 degrees Celsius.  However, that high looks like it will be increasing to 10 degrees Celsius from Sunday to Thursday.  Those milder conditions could make the difference between good fishing and the best fishing of the season.  I expect to hear some good reports all throughout next week.

As mentioned in last Friday’s fishing report we have heard of some larger fish being caught in the chuck.  It is just a matter of getting out on the water with the winter storms rumbling through the Georgia Basin area.  This weekend, the marine forecast looks significantly better…

Jason was tempted to go out yesterday with a rare sunny day in January.  It would have been a perfect day to be in the water.  Sometimes it is worth taking opportunities of great conditions when your schedule allows for it.

Last Saturday Eddie, Pacific Angler’s head guide, took out some clients from Alaska.  At first we were a bit worried that the forecasted wind and rain would have made for a tough day on the water.  But when I heard that they were from Alaska and that they were coming from -30 degrees Celsius I relaxed a bit.  It turned out to be a beautiful day. 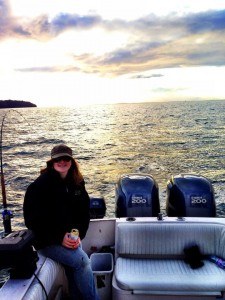 Life doesn’t get much better than this…

Eddie fished throughout the Vancouver harbour searching for winter chinook.  He was able to hook into a few shakers and one fish just below the legal limit, which was released to get a bit bigger.  Eddie was using the standard flasher and spoon (herring imitations, 3.5 inch) rig trolling at variable depths.

The tide was perfect with a nice flood and flat calm seas.  The sun actually peaked out for an amazing sunset.  Scenes like the one below are what makes Vancouver the city it is.

The tides this weekend are not ideal.  For the early morning angler there is a good flood tide up until 9 am.  Then it will start to ebb around 9:30 ish.  The late morning tide is not ideal.  However, later in the afternoon could be productive at the end of the ebb and going into the second flood.

The crabbing has been pretty good the last two weeks but we’ve heard that it has slowed down a bit this past week.  The prawning has been excellent when the weather permits.  On a good soak you can get up to a couple hundred prawns, which makes for a great feast with family and friends.

This past weekend everyone was holding their breathe to see how the melting snow would impact the river levels.  The rivers in the Lower Mainland did blow out early last week but have since been dropping back into shape.

From now until the end of the season you should be trying to get out on the water and maximizing your days.  The fish are there, it is just a matter of getting days on the water.  This weekend has the potential of being good with overcast skies, precipitation, and milder temperatures on both Saturday and Sunday.

The key to getting into steelhead at this time of year, when the water temperatures are at their lowest is getting your bait or fly close to the fish.  Steelhead can be lethargic in cold conditions so they won’t move large distances.  Pink is a classic winter colour for steelhead as well as reds and black.  Try to mix things up as well when you are fishing behind someone.  Adjust the size, colour and depth.  Also, make sure to cover the water you are fishing thoroughly but don’t dilly dally in one spot all day.  This is where casting can really make a difference between hooking up and getting skunked.

Andre talked a bit about fishing for cutthroat when the steelhead rivers get blown out.  The Harrison is always a good option at this time of year as well as the Stave.  While a few fry will be hatching at this time of year the major hatches will be happening in March.  Make sure to keep posted as this can be some of the best fishing of the year.

Countdown is approximately  2.75 months to ice-off in the interior.

Well, I hope you found our Friday Fishing Report helpful.  If you have any further questions please do not hesitate to drop by the store or give us a call at 604-872-2204.

See you on the water,

Posted on January 27, 2012 by Jason in FIshing Reports