Welcome to the Pacific Angler Friday Fishing Report.  The staff at Pacific Angler is proud to be your source for British Columbia fishing information. The relatively hot temperatures for the last 2 weeks have slowed down the lake fishing across the province. While the heat has helped river levels drop (by melting snowpack) we are not at optimal levels for the majority of rivers within the lower mainland.  Never fear, many great fishing opportunities are still abound and many more are just around the corner. 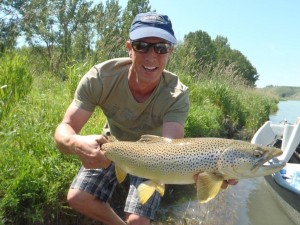 This weekend the forecast is calling for temperatures to drop with the possibility of rain and risk of thunderstorms this morning, cloudy conditions on Saturday and then a return to showers on Sunday.  The daily temperature high will range from 19 to 22 degrees Celsius this weekend.  Looking forward into next week you can expect showers from Monday to Tuesday with the daily high temperatures ranging from 19 to 22 degrees Celsius.  The good news is that midweek the forecast is calling for the sun to return with daily high temperatures ranging from 23 to 24 degrees Celsius.  Overall, this is a good forecast for the British Columbian fisherman/women.  To view the official forecasts for Vancouver and Kamloops click on the following links: Vancouver Forecast & Kamloops Forecast.

The heat is winning the battle with the heavy snow pack. A number of rivers have crested and are now coming down.  The Fraser River, near Hope, peaked last week and is currently dropping at a good rate.  We are seeing similar trends for other major watersheds as well.  This means that the Fraser, Vedder, Skagit, Thompson River and many others will be fishing well shortly.  For the river trout fishermen the end of July, August, and September are the best months to dedicate time on the water.

Overall, saltwater salmon fishing has slowed down.  The Pacific Angler saltwater salmon guides believe the unstable weather we are receiving has disturbed the salmon and put them off the bite, especially the coho.  The Pacific Angler staff has heard good chinook salmon reports.  Fraser River chinook salmon have caught off of the Bell Buoy as well as some big Squamish/Cheakamus chinook salmon being caught in Howe Sound at “Hole in the Wall”.  Looking forward you can expect the Fraser River chinook fishery to become more productive as we get towards the end of July, August, and beginning of September.  The Pacific Angler guides do expect the coho salmon fishing to improve once the weather stabilizes next week.

Last weekend I travelled to the Skitchine Lodge on the Bonaparte Plateau. I had an amazing trip. Great wine, great food, great friends, great accommodation and yes we did have some great fishing, although it was Hot! 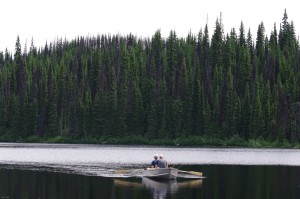 As the weekend progressed we found that the big fish were holding deep.  Samples from stomach pumping showed immature bloodworms. Unfortunately, this is one of the tell tale signs that the dreaded summer doldrums are upon us. 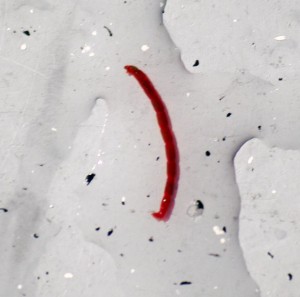 With the Stitchine Lakes located at 4,000 feet the affects of the summer heat had not quite settled in and we experienced some great fishing.  The average fish was between 10 to 20 inches with a couple very nice 20 plus inch fish.

This week we heard a few good reports from lower elevation lakes but overall lake fishing in the interior was slow.  With temperatures dropping this weekend things may change, but expect to use warm weather tactics such as fishing deep with leeches and dragonflies.

A good trick is to stomach pump any sizeable fish you catch. If you find a few food items in the pump, stay with the leech or dragonfly. If there are a good number of food items, besides shrimp, match the hatch and you will have a chance to catch a bunch. Focus on evenings with caddis flies and mayfly dry flies can be some of the best fishing this time of year.

The Pacific Angler staff cannot believe that August is just around the corner!  How time flies with good times and big fish.  As August roles through so do the big Fraser River chinook salmon.  The Pacific Angler saltwater salmon guides have already heard of some solid reports of chinooks being caught near the Bell Buoy.  Expect this fishery to continue to improve as well as off the mouth of the Fraser River.  This is an exciting fishery because you have a chance of catching a large 20 lb. plus salmon in the heat of the summer.

As explained earlier the coho fishing has slowed down in comparison to the great action we were experiencing last week.  We expect this to continue until this weather stabilizes, which is forecasted for this coming Wednesday. 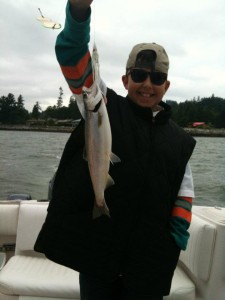 The Fraser River and most of the local rivers have crested and are coming down fast. With high water levels fishing has been tougher than average.  The Pacific Angler staff has heard of success on the Skagit River, fishing large nymphs in the edge seams and swinging bulltrout patterns.  I expect river levels to drop over the next two weeks. With any luck river levels will be close to optimal early August.

The Capilano River is now quite low.  This actually makes fishing easier for the fly fisherman. We have heard of a number of fish being caught on Andre’s “Cap Bugger”. Because of the low water conditions, gear fishing has slowed down.  Fishing very small presentations of roe has been successful.  The Capilano River may be a good option this weekend with the rain we are receiving.  You can expect fresh coho to enter the Capilano River if the river level increases from the rain today.

The Fraser, Stave, Harrison, and Squamish River are still high.  Although we have heard of some great sturgeon reports on the Fraser River most of the fishing is limited by the high water. With the river levels dropping the Vedder-Chilliwack River should start fishing well for chinook salmon.  The river has been high which means that there is little holding water. As the water levels drop the fishing should be dramatically improve.  Typically the peak time for this fishery is towards the backend of July and beginning of August.  While the most productive method for this fishery is with a float and roe, fly fishermen can target them with big intruder like flies and double handed fly rods.  Make sure to hold on!

I was guiding on the Upper Pitt River this week.  The river level was for the most part blown-out at the beginning of the week but dropped back into shape towards the end of the week.  I was able to get my guests into a few nice bulltrout on the fly, which is always a nice way to spend the day.  As the river level continues to stabilize I expect the fishing to continue to improve. 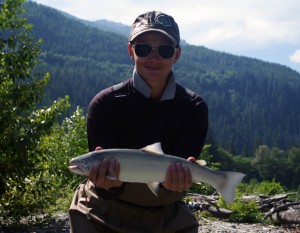 The Pacific Angler staff has not heard much from the Sea-To-Sky Corridor.  We expect the majority of rivers are high and dirty.  Perhaps, at the beginning of August, these rivers will drop back into shape making them productive trout fisheries.

Fishing conditions in the lower Skeena region near Terrace have continued to be difficult during the past week.  A large alpine snowpack, combined with very cool temperatures in May through June has prolonged the freshet that normally would have subsided by late June.  Currently, the Skeena is high and dirty with approximately eight inches of visibility, but with temperatures cooling off, it will help bring water levels down and increase water clarity on both the Skeena and its tributaries.

Because of the Skeena system’s high flows, we’ve turned to the Kitimat River for the majority of our Summer guiding to date, and overall it’s been incredibly productive.  The Kitimat has a prolific run of Summer Chinook Salmon that average 20 to 35 lbs, and can fish very well with both flies and conventional gear. 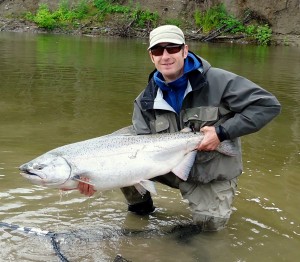 When fly fishing, an average day is approximately 1 to 3 fish hooked – but not necessarily landed!  The Kitimat is a braided, wood-lined river that has numerous trees and stumps mid stream, which can make landing big, bright fish difficult at the best of times.   The largest fish landed last week was a 39 lb Chinook caught on the fly, with a fish estimated in the 45 to 50 lb range lost on a mid stream snag.

Chum and Pink Salmon have started to pour into the lower reaches of the Kitimat River and will steadily increase in number over the coming week.  With the Skeena and its tributaries dropping, we’ll begin shifting our attention to the trophy Chinook opportunities there, and Summer Steelhead starting in early August.

Please do not hesitate to contact Pacific Angler at 604-872-2204 and speak to Dave or Jason for enquiries into the Nicholas Dean Lodge.

If you have any questions about our fishing reports please do not hesitate to drop by our store at 78 East Broadway or give us a call at 604-872-2204.

Matt Sharp and the PA Staff