It looks as though summer weather is just around the corner. The 14 day trend is calling for above average temperatures latter in the month and though we have been complaining bitterly about the lack luster spring, look for the silver lining. Historically this has been the time when lake fishing has slowed but with the colder than average temperatures we can expect great lake fishing right through July.  This week we will see a mix of rain and sun with temperatures rising. Vancouver Forecast and Kamloops Forecast

Please read below for the marine forecast. This is a great resource to check the conditions before you head out on the salt chuck.

The Georgia Basin is forecasting moderate winds 10-15 knots southeast diminishing to light winds Saturday morning then switching to 15 knots southwest Saturday. On Sunday we are going to see 5-15 knots becoming southeast and carrying over to Monday – Tuesday 10-15 northwest. This bodes well for good ocean fishing for the next couple days though check the report regularly as changes happen quickly. 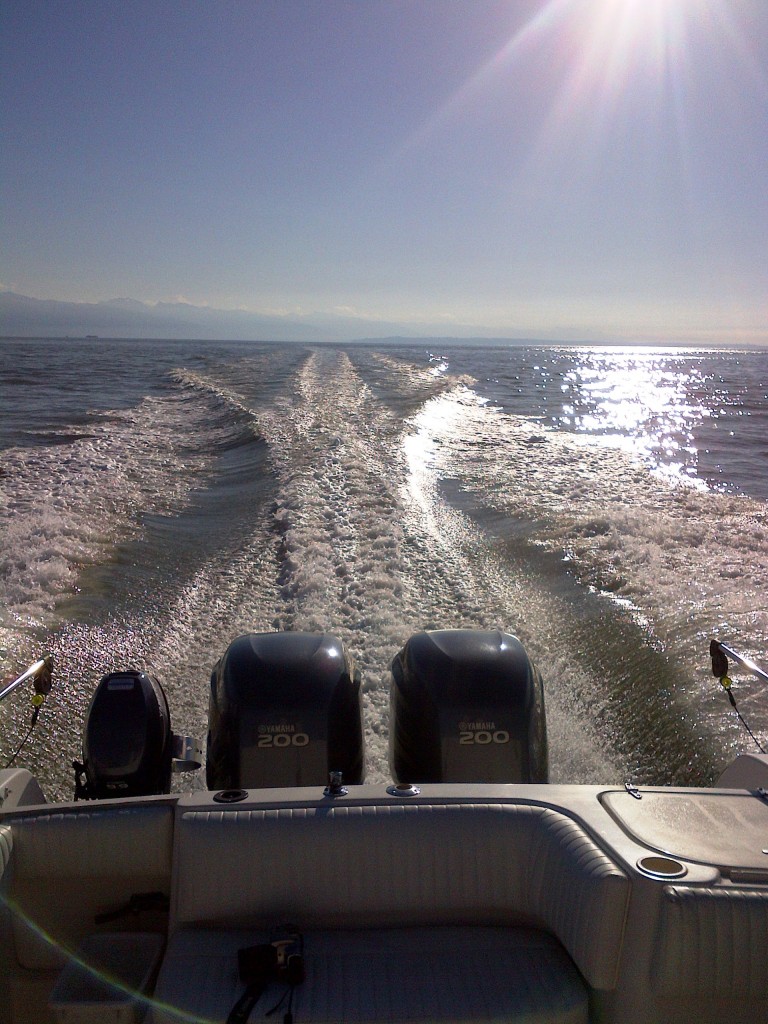 We had some great lake fishing reports this last week. We heard of a few instances where weather hampered things but when the weather cooperated the fishing was hot. We heard of a few more, great mayfly hatches and in some instances mayfly fishing was excellent without an apparent “hatch”. We have also heard that caddis have begun to show themselves.  With the late cold spring the second temperatures heat up expect big hatches. Look for lakes under 4000ft that have marled bottoms. Caddis hatches can be elusive but its well worth keeping an eye out for them. They tend to come off in the evening after a clear warm day. Chironis and micro leaches are still king in the colder weather but this time of year make sure you have damsel, caddis and mayfly (both dry and wet variations) in your box.

-We had a decent report from Stump this week

– Corbett had a great mayfly hatch last week and we also heard of good fishing on small green chromies.

– We heard of the same mayfly and chironomid show in the Kane lake area, with GMC chironomid patterns getting the best report.

– Roche had some great fishing relatively deep though we had one good report of fish in the shallows.

Dave and I were out for the Father’s Day Fish Out on Rice Lake helping teach the next generation about fly casting. It was tons of fun and a number of kids caught and released their fist rainbow trout. Good job to all the guys at the Seymour society and all the other volunteers. A special thanks to the guys working the rigging station. I have never seen so many birds nests but the guys put on a smile and jumped in to the tangles! This is a great event for the kids and if you are interested talk to us at the shop and we can give you all the details for next year.

With the fish out lots of the local lakes were stocked last week end and now that they have had time to settle fishing has been great. Check out the stocking reports to plan your next trip. 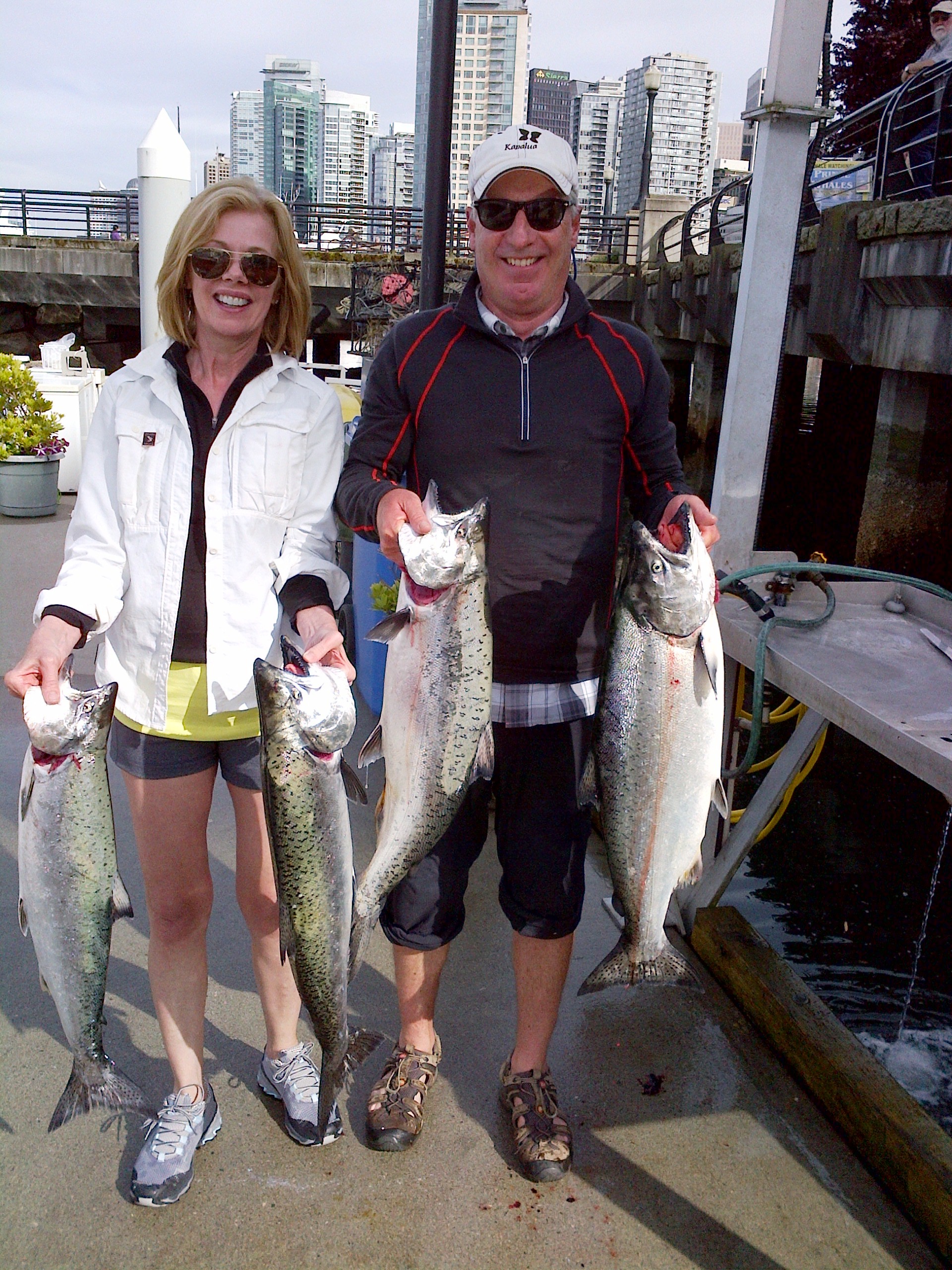 The Salty Dawg was out yesterday with guests Monte and Kelly on their annual Tharsher Rock trip.  Expectations were high as last year we had great fishing and sunny weather.  As luck would have it things were pretty much a repeat of last year.

We were fishing the structure at Thrasher Rock in 100-180 feet of water.  On the sounder you could see lots of bait stacked up on structure and even some nice chinook arcs.  The bite was on in the morning and in the first two passes we hit 4 chinook and landed 2.  By 11:00 am we had our limit of 4 springs in the boat so we decided to go into Silva Bay for a few refreshments and get some ice on the fish.  We made a couple of passes later in the afternoon and lost a fish and released one.

The tally for the day was 8 hookups.  6 of the 8 fish came on small spoons and 2 came on hootchies.  The fish are feeding on very small herring so the small Kingfisher 3.0 spoon seemed to produce well due to the shorter length and narrower profile. 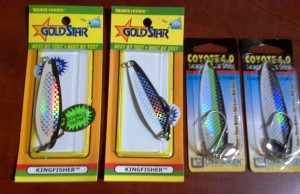 We were hitting the fish at Thrasher Rock in 100-180 feet of water and 117 to 147 on the downriggers with most of the action being near the shallower range in the morning around 120 and then deeper around 137 later in the day.  We also heard of some fish over at Grande and Waterfall in the afternoon on the flood tide.  It looks like the wave of red springs we see this time of year has arrived as all the fish we cleaned were red.

Closer to home we haven’t seen or heard of any consistent coho fishing off the West Van shoreline.  That being said, we are getting some good to excellent reports from the anglers fishing the river.  It sounds like there are some bigger fish in the 6 -8lb class hitting the river as well.  We are hoping some of these fish will start to stage along West Van and the Cap Mouth so we can get a shot at them before they head up the river.

In the meantime we will continue to run across and fish the Garbriola area until the chinook fishing slows down and the coho fishing on this side picks up.

Check out the Guide Journal for a fully detailed report and if you want to get out give us a call to book your trip. 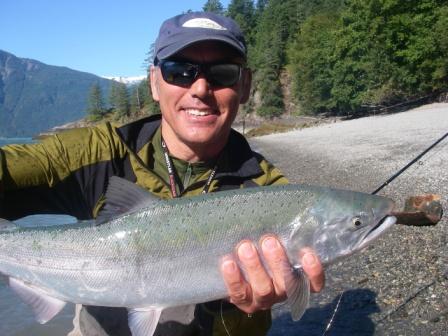 We have yet to hear of any great beach reports though some anglers have run into a few late cutthroat. Andre just finished his beach fishing seminar and for all those interested keep looking at the report. Andre, Dave and Matt will be scouting hard and will keep everyone posted for when the fish show up. This fishery is best covered with a floating line and 7-9wt rods for the Coho and 5-6 wts for the cutthroat. Look to areas on the north shore like Ambleside Park near the mouths of rivers and creeks. Come talk to us at the shop and Andre will show you the flies and share some of his secrets.

It is almost river season!!! On the first of next month many of the classic trout streams will open! With snow packs high and a late run off we do not expect things to be great on opening day. We would recommend dragging your feet when planning a trip but historically the rivers should start to dropping soon and as soon as they settle fishing should be great. If you go early, fish heavily weighted nymphs and minnow imitations. Look to the Skagit and Thompson rivers then branch out from there. 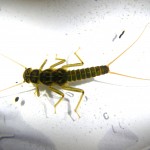 The Capilano has had a good season and things are still fishing great for coho and the odd summer run steelhead. Float fishing is the best way to cover this river though small spoons and flies fished in the deep pools have been productive. Watch the river levels and look for good fishing after bumps of rain. Remember all Steelhead are catch and release only.

The Fraser, Stave, Harrison, Squamish and Chilliwack are in freshet and though we have heard some great sturgeon reports on the Fraser most of the fishing in these areas is either closed or limited. A few of the smaller tributaries have some fish and we have heard of springs off the mouth of the squeamish so they should show up soon in the Cheakamus soon. This fishery can be fun for trout on egg patterns when the salmon hit the river and we are excited about scouting this fishery soon.

We have heard whisperings of a Fraser salmon opening though no details yet and we don’t expect to hear anything for some time.

From the Pacific Angler team we hope you found this report helpful.  If you have any questions about our fishing report, do not hesitate to drop by our store at 78 East Broadway or give us a call at 604-872-2204.

Have a great weekend I’ll see you out there,