It’s the last weekend of March and you know what that means…renewing your licence for the 2012/2013 fishing season.  You will need to renew your licence as of March 31st.

To renew your licence just click on the links below.  We’ve provided both the freshwater and saltwater licencing systems.

It is hard to believe it is almost April.  I thought spring was here last weekend with all of that sun.  But this week has brought rain and cloud, bumping up water levels for the river fisherman.  Rain is expected on the weekend as well.

The Vancouver forecast is rain for both Saturday and Sunday with highs of 8 degrees Celsius.  The extended forecast is similar to the weekend with cloud and rain but temperatures rising to 12 degrees celsius by Thursday.

The marine forecast for the Straight of Georgia for tonight and Saturday is:

The forecast is for a northwestern so it might be a bit bumpy but definitely doable.  The fishing has started to pickup a bit.  Jay and the boys are itching to get out on the Salty Dawg for some winter springs.  Hopefully, when Jay gets back from Cuba we’ll be able to get out on the water in search of these bullet chrome fish.

If you are thinking of heading out for some local saltwater fishing the areas to concentrate are along the West Vancouver shoreline (pink apartments) and amongst the freighters.  We haven’t heard much from Thrasher Rock quite yet but that is probably because no one has really been fishing it.  This fishery didn’t really get going until mid May last year.  Here is a picture from one of our charters last year. 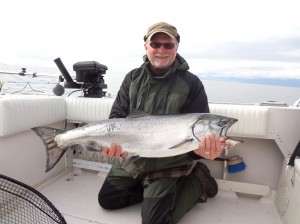 We are expecting another great one so make sure to get your hoochies ready…double skirts baby! 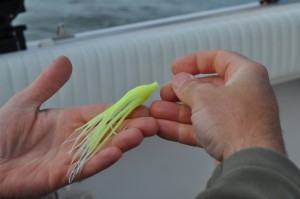 April is the magical month of river fishing here on the west coast.  Whether you are going for searun cutthroat or steelhead make sure to get out on the water during April.  Also, make sure to check on water levels.  This is a big snow pack year.  Once we get a few warm days it will really push in a lot of water in our coast rivers.  This warming period doesn’t really happen until late April or even mid May if it is a cool spring such as last year.

Generally, the water levels have been quite low.  The fishing has been decent all around the Lower Mainland and Sea to Sky country.  Last weekend Andre took out his students from the “Fly Fishing for Searun Cutthroat in Rivers” course to the Harrison.  The conditions were tough with strong winds and lots of sun.  However, the students put their new knowledge to test and hooked into a few fish.  Check out the pictures below: 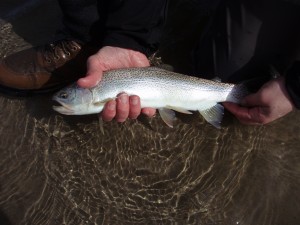 Fry patterns have been the ticket with the fry emerging out of the gravel over the last few weeks.  Predatory fish will be focusing on these easy snacks until the freshet, when the fry get pushed downstream.  Andre’s famous fry patterns have been selling like hot cakes.  We’ve still got a few left and he went home early today to tie up some more to re-stock the store… 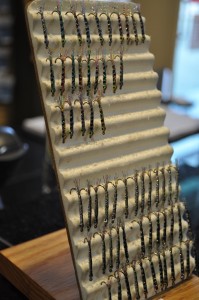 These fry patterns will catch cutthroat, bulltrout, resident rainbows, and even steelhead.

The steelhead reports have been steadily coming in as well.  The Vedder has lots of fish at this time of year.  This is the time of year that some anglers will switch from float fishing to fly fishing.  The reason for this is the warmer water temperatures, which generally makes steelhead more active and more inclined to move to a fly.

For any specific steelhead questions please do not hesitate to drop by the store or give us a shout on the phone.

I’ve heard a few reports from some of our customers.  We were pretty hopeful that the ice would come off early but then we’ve heard some reports of guys still ice fishing on the higher elevation lakes.  It might be a while yet, but here is hoping.  Pacific Angler will be ready though.  All of the guys can’t wait to get into the interior and get dialed into the lakes.

We’ll be providing more detailed lake reports starting in April.  In the meantime if you have any specific questions please do not hesitate to drop by the store.  We offer some great courses in April and May for the lake fly fisherman.

Again, if you have any questions please do not hesitate to drop by the store.  I hope you found this article helpful in your fishing journey this weekend.

I’ll see you out there,