We normally do “What’s New Wednesday” today, but by now I think all of you know what is new here at Pacific Angler, the new location of course! So instead of more shop pics and products I thought I would do a fishing report as Jason, Dimitri, and Andre were all out on the water yesterday.

I fished a variety of rivers out in the Valley yesterday with Jason Bowers. Jason is the head guide up at Haa Nee Naa Lodge where I used to guide. He was down from Nelson to visit some family so we decided to head out for a full day of steelheading. We fished hard all day and it was cold and tough! The water conditions were absolutely perfect on all the systems we fished, but overall it seemed pretty slow out there by most accounts. Most of the rivers were high and dirty on Monday but dropped hard overnight with the cold snap. As predicted, the rivers were in mint shape Tuesday, but the fish weren’t co-operating. Unfortunately we had clear skies and a full moon on Monday night and that generally means pretty tough fishing the next day with the sun and the fact it has been so bright all night long. We finally found some success late in the day on the lower Vedder when we ran into some moving fish. Another guide friend of ours, Johnny, was in the lower and hit a few fish so we decided to join him for the last hour of the day and Jason hit a nice fish just before dark and Johhny hit one more as well.  I got skunked.  It happens to the best of us… 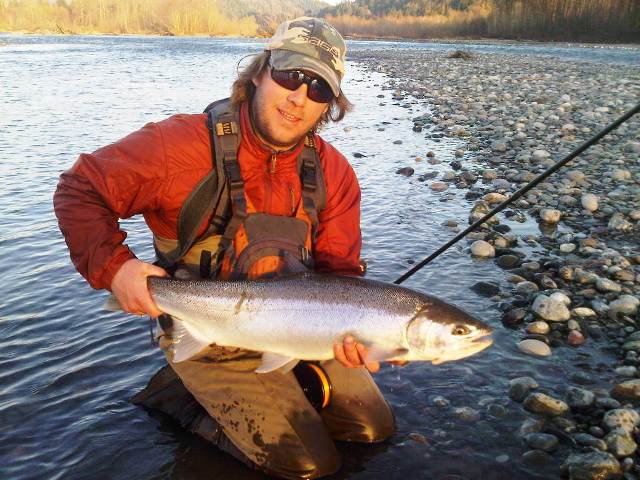 Dimitri was out in the Squamish area searching around for steelhead and Dolly Varden.  Basically similar scenario.  Awesome conditions and slow fishing for him.  There were some outflow winds to make it extra cold and his guides were frozen up pretty good most of the day.

Over the weekend a few winter springs were hit off W. Van but the full moon and clear skies can make that fishery tough as well.  The theory is the fish feed at night with all that light from the full moon, so it is slow during the day.

It looks like it will warm up and start to rain on Friday, and the big tides will no doubt be pushing steelhead into the rivers. So… it should pick up out on the Vedder and in Squamish pretty quick.  March is prime steelhead time, so you can bank on some good fishing over the next 3 weeks and into April.

See you out there,

Posted on March 7, 2012 by Jason in FIshing Reports