This weather, gasp! Is this RAIN?  In Vancouver??  This wet stuff is so unusual around Vancouver I don’t know what to do??  Yes, the barometer has dropped, raindrops are in the forecast for this weekend but this should not “dampen” your spirits regarding the fishing which has been great as of late.  See reports below on springs and double headers!

Up in the interior the dryness continues and this bodes well for some dry fly fishing on the Thompson and other areas.  We even have an updated Stillwater report from our friend John Kent on which lakes to target and why NOW is the time to go target a few of our favorite lakes!

If you fish anywhere in INDIAN ARM READ THIS!  We have had reports that conservation officers patrolling the area and confiscating a lot of gear.  Rockfish are a protected fishery and there are some very specific and detailed area’s in Indian Arm where you will get fined, lose your gear or both for even dropping a line/hook in the protected area.  This means that if you are fishing in a  ANY (not just Indian Arm)protected region for rockfish and you chase some pink salmon into that area and pursue with a FLY you will still lose all your gear.  Protected spots means NO HOOK in the water period.  Rockfish Conservation zones in Howe Sound & Indian Arm are absolutely important for any trip.

Stillwater Report:  John Kent has given you Stillwater fans a breath of fresh air in this mid-summer report.  Enjoy!

The Exception to the Rule

As Stillwater fly fishers we know that the late summer heat of August has forced the trout to murky depths and made them too lethargic to chase any offering we present. It is at this time that we pursue other recreational interests while we wait for water temperatures to cool down in mid-September and bring on the fall fishing season.

However there is an exception to the rule. Of course the rivers offer exceptional fishing at this time but we will stick to either Stillwater’s or bust! So the options are slim. You can step outside your comfort zone and go to lakes at much higher elevations and usually smaller fish due to a shorter growing season or you can ply your usual haunts with Hi-D lines and dredge the depths early morning and late evening for the few cooperative fish that might engage you.

For those unaware, there are a handful of lakes in the Southern Interior that explode to life from mid-July to late August when surface temperatures are close to busting through the 70F marker. A couple of the lakes in question are Minnie and Stoney on Douglas Lake Ranch, Hatheume Lake, just off the Kelowna Connector on the Merritt side and Tunkwa/Leighton perched upon the Thompson Nicola Plateau.

And what could possibly be hatching at this time of the year to bring the fish out of the comfort of the cool depths? Bomber chironomids! They are called that because of their size compared to standard chironomids that emerge in such great numbers in the spring and to a lesser degree in the fall. The Stillwater standards ranging from size 18-12 are on a one year life cycle whereas bombers take two years to emerge into adults.

The first bomber hatches of the summer occur at both Minnie/Stoney and Hatheume as well as a few other lakes that are unmentioned here but I will concentrate on Tunkwa Lake as that is where the lion’s share of my knowledge resides having managed the resort from 1999 to 2008.

Without exception this is absolutely the best time of the year to find the largest residents of Tunkwa cruising the bottom depths in 12-14′ of water looking for chironomids staging up for their emergence. At this time of the year Tunkwa has a maximum depth of 17′ which makes it very difficult for the fish to hide even if they wanted to which in turn makes it very easy for the fly fisher to locate them. 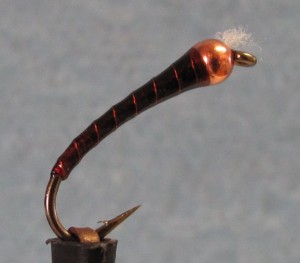 Floating lines, indicators and 17′ leader setups are the way to go. Recommended rods are medium to fast action in the 5-7wt. class. Keep in mind that it is important to shorten the time of the battle and revive them to good condition before releasing. The warm surface temps can make a strong fish build up lactic acid quickly so stout rods are beneficial at this time of the year. 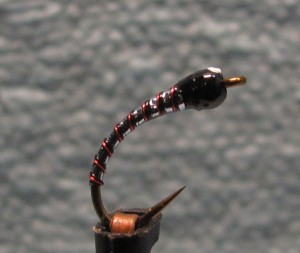 When tying imitations of bombers you will want to cover a wide range of sizes from as small as size 12 1XS to size 8 3XL with the larger sizes being over an inch long. Big bloodworms work very well this time of the year as well and are best tied on size 12 3XL to size 8 3XL in reds, maroons and greens and believe it or not, combinations of these colours. 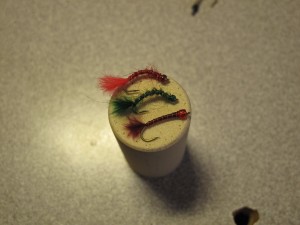 To complicate the tying even further you will want bead heads ranging from white to copper to brown to black and everything in between. Bead sizes should be 7/64th’s to 1/8th. Coloured beads which incorporate gills tied in will have to be cast aside for either white beads or no gills at all if there is algae present in the upper water column. White gills are algae magnets and will throw the fish off of accepting your well-presented fly.

The saving grace of tying bombers is you will only find two main colours of naturals, browns and olives, but several shades of each colour. The best brown pattern I have found is dark reddish brown to match the naturals that are present every August, along with summer duck or rusty brown. For olives I prefer dark olive patterns for Tunkwa but medium olive all the way down to chartreuse will work as well and then of course there are the very popular patterns that incorporate Anti-Static Bag and Gunmetal Flashabou to simulate the gases the naturals collect under their cuticles to aid in their ascent to the surface.

Well, I could go on and on about Bomber Season but this is a good starting point and at the time of this writing (August 14th) the hatch should be in full swing so get out there and toss a line and try your luck.

Capilano: The Cap is low and the fishing is slow. This rain is a great sign! If it rains enough, and the dam lets some water through, expect a wave of fresh fish to push in. Float fishing is very effective on the cap. Presentations such as roe, krill, colorado blades and small spoons work well. Fly fishing with full type 6 lines and small olive buggers and muddler minnows is also effective. Please identify your catch properly and release all wild and hatchery marked steelhead.

Squamish: The Squamish river is still quite coloured up, however, the fishing continues to be hot for Pink salmon. Fly fishing and float fishing are the most effective methods. Larger pink flies like #8-6 pink wooley buggers and cerise clouser minnows are good choices in the dirtier water. Gear anglers will find pink tinted spinners, marabou jigs, spin ‘n’ glos, and wool ties to be effective. You are required to release all trout and char. Get out there and be mindful of the fish and your fellow anglers.

Skagit: The skagit is fishing well as usual for this time of year. Lots of aggressive bull trout milling about. Make sure to stock up on patterns like the Nearnuff Sculpin and Ricks Par. When the dry fly fishing gets tough, don’t be afraid to swing soft hackles or nymph for the rainbows.

Thompson: The T has dropped down to its average summer height. Fishing has been quite good on the surface with hopper patterns and stone flies such as the California Blonde. Matt Sharp is headed up to the Thompson for the weekend so feel free to call the shop on Monday and get an updated report!

Cast on this link to read the LIVE 24/7 report http://www.noelgyger.ca/current-fishing-reports.htm

I was out at Ambleside on Wednesday and did not see any fish, however everyday is a new day when it comes to beach fishing, you never know when the next wave of fish are going to come. The tides are great the next few days as it goes into low tide in the mornings. We still have until the end of September to fish for Coho. Furry creek is still producing pinks everyday as waves of fish come through. Also you will encounter a few more Chinooks at this time as they mill around for a few days before they head up the Squamish.

Some chinook and pinks from the T-10

We have had some days where we have hooked as many as 12 chinook on a tide change down at T-10.  This Thursday (Aug 15th) we hooked multiple chinook at the Bell Buoy in the morning and again in the afternoon.  There are some pink salmon in the mix as well, a few sockeye (please release carefully) and the odd wild coho and hatchery coho.

Guide Dimitri and happy client with one of many chinook that day!

The best depths have been from 30 feet down to 80 feet, with 63 being red hot lately.

There have been fish on both the ebb and flood tide.  The best bites have definitely been about a half hour before the slack tide, during slack, and into the next tide for about 30 minutes or so.  That being said, we have had some good bites mid tide, so as usual, you just need to get out there and put in the time. 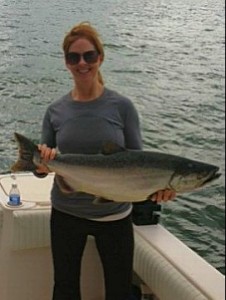 We have been doing extremely well on Pesca RSG (Ricker Super Glow) Spoons, as have some of our regular customers who were quick on the draw to give these spoons a try.  I have been test fishing these spoons for a year now and they are hot!  I have never seen anything glow like this before.  They easily out glow all the other spoons on the market.  They seem to especially out perform in dirty water on when fished deeper than 65 feet as the glow becomes the key factor at this point.  Check out these pictures of the spoons and then when the lights are off they glow like a light bulb!

Pesca RSG Spoons with the lights on…

Pesca RSG Spoons with the lights off !!

THESE SPOONS ARE AVAILABLE AT PACIFIC ANGLER NOW!  WE JUST GOT OUR SECOND SHIPMENT IN.  GET THEM WHILE YOU CAN, THESE ARE MADE LOCALLY AND ARE CUSTOM BUILT FOR US AND NOT AVAILABLE AT OTHER SHOPS!

We have also been doing well with bait.  Both herring and anchovies have been very productive in glow chart/green teaser heads with a 6 foot leader.  These have been the hot teaser heads.

These have been the hot flashers and we have them in stock right now, not always easy to get these.

We also have lots of bait and salt at the store.

Come in the shop and get set up or book a charter and get out there and hook some big chinook! 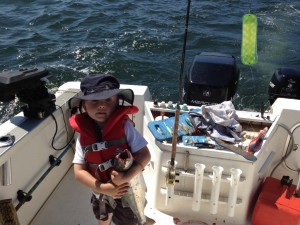 We hug’m to death, no bonker needed!

The fishing this next week should be awesome as we near the full moon!

See you on the water or in the shop!

Posted on August 16, 2013 by Jason in Uncategorised