Grab your sunglasses, sunscreen and fishing rods! Another awesome week of weather is coming! Temperatures are going to creep up to mid 20s in Vancouver, and jump into the 30s up in Kamloops! Check out the Vancouver and Kamloops forecasts. 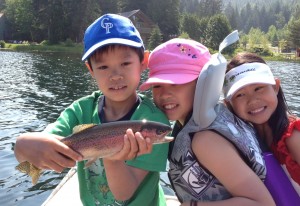 Fishing in “Lake Country” this weekend should still produce some good results. I am heading up to the Bonaparte area this weekend to the Skitchine Lodge.  Although this is considered late for lakes in this area we are hoping that the week of heat hasn’t slowed the fishing down. I did have a chance to speak to the staff at the lodge and they said that the fish are holding a bit deeper (15 to 30 ft.).  Caddis flies were hatching which is exciting.  The Mayfly hatches are happening as well.   The standout fly that produced well when no hatches were occurring is the mini leech in maroon.

If you can’t make it out to the interior for lake fishing then think about the Squamish, Whistler, and Pemberton area.  I heard of a couple of good reports from the Whistler area.  A regular customer was at Nita Lake and did well catching about a dozen nice rainbows.  The flying ants were migrating so patterns to use are dry flies with a black body.  Another regular customer took his family out to Alta Lake and hooked into a few nice rainbows.  This is an excellent area to take a day trip with the family.

In terms of saltwater fishing we have really seen a shift in the fisheries.  The saltwater salmon fishing around Gabriola and Nanaimo has been fairly tough this week with only a few fish being caught.  However, the local saltwater salmon fishing has improved dramatically over the past week.  We have heard of some fairly decent reports of chinook being caught around the Spanish Banks, Bell Buoy area.  This is a good sign for the upcoming months.  The chinook fishing will continue to improve as we get closer to the peak migration of the Fraser River chinook salmon in August.  The coho fishing off of the West Vancouver shoreline has also been good over the past week with Pacific Angler’s saltwater salmon head guide, Eddie, consistently hooking into nice coho salmon on 5 hr trips.

Before you head out on the water make sure to check the latest marine forecast from Environment Canada.

Another week of great lake fishing reports!  Lakes from Vancouver to Quesnel fished well, as expected with the first good bump of warm weather. Generally fishing is slower in the middle of the day. The morning and evening periods have produced the best fishing.  I have heard reports of good damselflies, sedges, and even some chironomid hatches.

I had an opportunity to talk to the staff at Roche Lake Resort for the latest report.  The staff commented that the lake’s water level is quite high at the moment due to all of the rain they received over the spring.  The last few days have been quite warm up on the lake.  The average rainbow trout caught has been between 1 ½ to 2 lbs. with the odd 4 lb. fish being caught.  Currently there has been a good late night sedge hatch happening.  For the fly fishermen the standard chironomids in sizes 14 to 16 have been working well.  On the south end of the lake bomber chironomids are producing some nice fish.  Other flies to use when there are no obvious hatches occurring are micro leeches in black and burgundy, and mini leeches in maroon.  For the trolling fishermen the wedding band with a willow leaf and a ½ worm has been the most productive. 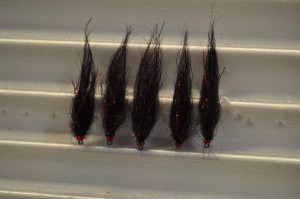 When there are no visible hatches the mini leech has been very productive.  A regular customer sent us a picture of a 12 lb rainbow trout out of Sheridan Lake caught with one of Andre’s custom mini leeches.

If you have any lake fishing reports you would like to share with the staff please do not hesitate to call us at the shop at 604-872-2204. As well, if you are heading up to the lakes this weekend and need some advice make sure to stop by our shop on your way out.

The local Vancouver saltwater fishing has been heating up with good reports on both the Spanish Banks & Bell Buoy side for chinook and West Vancouver side for coho. 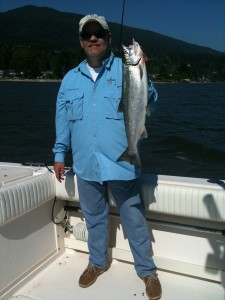 Anglers have been doing decent over the past few days for chinook salmon near the Bell Buoy.  Productive setups have been bait (lanchovies) with glow teaser heads or chrome teaser heads and the standard flashers (green glows, purple onion, etc.).  Depths range from 40 to 100 feet. The bite has usually been turning on either at the low slack and the high slack.

The coho fishing has been good over the past week as predicted.  Our head guide, Eddie, is known as “Captain Coho” and definitely knows how to catch a coho or two, or four!  His favorite recently has been the Yamashita “Casper” Hoochies and we have lots in stock at the shop.  You want to make sure to troll at a fairly fast pace with your downriggers at approximately a 45-50 degree angle and focus on depths from 15 to 45 feet as the coho are pretty shallow right now. 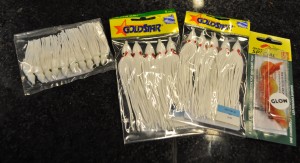 We are expecting the area around the mouth of the Fraser River (T-10 mile marker, etc.) to open up July 16th 2012. There is likely to be a slot limit for the size of fish allowed for retention.  We’ll make sure to post the announcement on the Pacific Angler Facebook page so stay tuned.

The Gabriola and Nanaimo area has really slowed down over the past week.  Eddie was over there on Tuesday and had some pretty tough fishing.  However, he was able to get his guests into a very respectable halibut.  It was the first of the season for us.

If you would like regular saltwater salmon fishing updates for the Vancouver area check out the Guide Journal.  Pacific Angler guides and staff post detailed reports every Monday, Wednesday and Friday with strong intel from our guides and customers.  Also, if you would like to book a Vancouver salmon charter don’t hesitate to contact Dave, Pacific Angler’s booking manager, at 604-872-2204 to enquire about availability.

As mentioned in the Pacific Angler Outlook the warm weather has increased the flows of our coastal rivers.  However, we are seeing some rivers dropping into shape nicely and starting to fish well.  As we get closer to August all of our rivers should be in good shape.

The Capilano River has been fishing well for both the float fishermen and the fly fishermen.  The staff have heard of good reports.  Andre and Dimitri have been able to fit in a bit of fishing as well.  Andre’s custom “Cap Bugger” is a standard fly for that fishery.  For the float fishermen we heard red krill has been the ticket lately.

The rivers along the Sea-To-Sky Corridor are fairly high at the moment and for the most part unfishable.  We heard of a good report on the Cheakamus River for bulltrout and rainbow trout last weekend.  However, the river has risen a fair bit this week and is running high and dirty.  Expect these fisheries to start producing towards the end of July and beginning of August when the snow melt backs off. 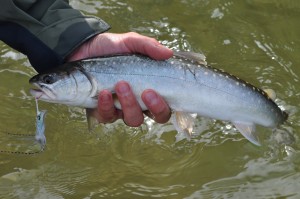 Although the Skagit River is still fairly high we have heard of some good reports this past week.  Large stoneflies work well at this time of year as well as large streamers in white for the bulltrout.

The Vedder-Chilliwack River is high but fishable.  The chinook salmon have started to show up.  This can be an excellent fishery for big red springs and usually peaks in late July for chrome fish.

A good friend of the store went to the Dean River this past week and did fairly well.  The river was extremely high and unfishable for the first part of the trip.  Luckily it dropped into shape for the second half of their trip.  This is actually a great scenario as the high water tends to bring in fresh fish that have never seen a fly, so they are very aggressive.  The group was able to hook into a few nice steelhead and some chinook.  They noted that there seemed to be more steelhead hooked than chinook.  The trip was planned to target chinook salmon so it was unusual that the steelhead were more predominant for this time of year.  This is a good sign for the upcoming steelhead season on the Dean River and hopefully a good sign for all the rivers up North this fall as the spring steelheading this year was very slow in that region.

The reports that we’ve received regarding the Skeena Region is that the systems have all been fairly high especially the mainstem Skeena.  However, all reports have confirmed that the rivers are now starting to drop.  At this time of year, chinook fishing can be some of the best in the world.  As we get closer to August there will be more chinook migrating as well as steelhead and coho salmon.  Expect this river fishery to improve and peak for steelhead in September through to October.

If you have any questions about our fishing reports please do not hesitate to drop by our store at 78 East Broadway or give us a call at 604-872-2204.  The staff at Pacific Angler has a diverse range of experience and would be more than happy to share their knowledge and talk fishing with you.

Have a great weekend,