Hot and steamy.  This weather has been amazing, its why Vancouver is one of the most beautiful cities in the world AND it keeps the fish stacked up off W. Van.

The weather does not look like it will let up either.  There is nothing drastic in the marine forecast either with 10-15knot NW winds for the next few days.

There are regular updates being sent out by the DFO now as well.  Make sure you know the updated regulations for pink salmon in Howe Sound.

Lake fishing has not died off yet.  Just fish higher elevation lakes or mornings and evenings for the hatch or for cruising fish in the shoals at night.

As mentioned in last weeks fishing report, we were expecting to have the professional video of the Whitecaps Team salmon charter we hosted on July 10th.  The video is AMAZING and hilarious!! Good laughs and good times.

We are thrilled to announce that Andre saved up after tying 4000 flies, proposed to his beautiful and talented girlfriend Stephanie and she said YES!  We found out on Tuesday and had a little champagne and toast to our friend and co-worker!  We are thrilled to promote the Stephanie & Andre Wedding Gift Registry! 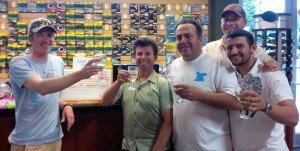 A TOAST TO ANDRE & STEPHANIE!!

While we have not heard a lot of lake reports lately as people are focusing on the salmon and getting ready for beach fishing we did here some interesting reports yesterday from Lundbom.  Great fishing in 20-24ft of water with gold chironomids and the water temps were 65deg.  Fantastic pics of the young-guns with some slabs! 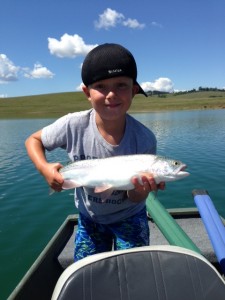 Which is bigger the fish or the fisherman?

Alta and Green lakes are fishing good with the north end of the lakes producing good fish.  Better than average rainbows off the point have been caught on highway 99.  Don’t hesitate to try the docks off rainbow park on Alta as well. Green lake has all 3 inflows fishing well.

Rivers have been falling into shape with the sun/heat coming on and being steady with no precipitation in the forecast this should continue to be the same.

The Birkenhead river is in shape for fishing. Stone fly and egg patterns are recommended.

The Skagit has dropped with the consistent heat and is fishing way better than a couple weeks ago.  Some bulls are around and the bows seem to be easier to raise as well.  The Skagit will just continue to get better as the weeks pass so schedule a day and get in some good nymphing or dry-fly action! 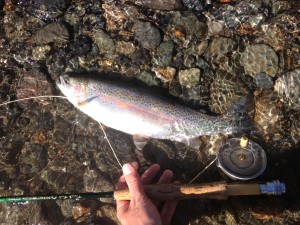 Thompson River is fairly high, with some colour to the water. Spence’s Bridge to Ashcroft produced some decent rainbows. Tons of whitefish about. Fish are being caught on both nymphs and dries. Be sure to drop by the shop and pick up some small California Blondes and small dark Stonefly nymphs.

Ryan O’Connor fished the Thompson this past week as well and told us that Stoneflies have not started hatching en mass yet few are showing on the rocks here and there despite that we got into some nice hard fighting fish up to 19 inches on chernobyl ants and stoneflies.

Went to the beach 90min before low tide and hooked a coho on the 5th cast. I was using a pink clouser type fly with bead chain eyes. Lots of fish around as the gear guys proved it. There will be a push of fish and more activity with the full moon. The fish are fresh still and not showing themselves to much so casting blind is the ticket right now.

Mission to Chilliwack area: River levels are dropping very fast over the past week and now there are beaches showing in many locations and islands that were underwater last week are now visible. This means that taking a big fish to shore for photo opps is easy now. Fishing slowed just a bit the last 3 days but was hot prior to that for a week. Recent trips are producing nice fish none the less. 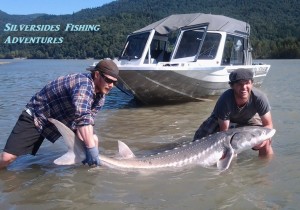 Its a good time for sturgeon!

There is lots of fish rolling and we have seen some hogs up to 9 feet roll right by the boat. Sturgeon are getting ready to feed on fresh salmon and should turn on any day now as more and more Sockeye and Chinook head upstream. Bait choices have varied from one day to the other but you should always try to keep some lamprey, eulachon, fresh roe or salmon (sockeye/chinook only, never farmed fish!!!) and if you can get some fresh northern pike minnow those work too.

Chinook salmon opens July 27th and no size restrictions! We look forward to another stellar Chinook season from mid August to early October. A Sockeye opening is still a unknown but currently is not planned so we are not too hopeful. This years Sockeye are the offspring of the 2009 collapse and they will need a few generations to rebound. Fraser Sockeye will be able to rebuild once we kick the salmon farmers diseases out of our ocean.

Fishing has continued to improve locally along West Vancouver and  it seems that along with the big plump cohos we’re getting we are also hooking chinooks as well. Not to mention an ever increasing amount of pinks in West Van and Hole in the Wall. 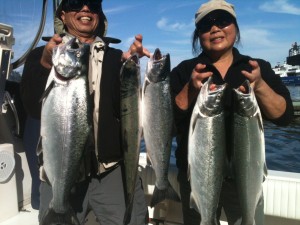 A successful outing with Eddie Matthei!

Last Friday I had a full day trip so I went to Hole in the wall and got a really nice coho, a spring and lost another before we came back to West Van and got into a hot bite on cohos between fisheries and Dundarave. It seemed like sockeye fishing with double, triple and even a quad header! I was able to take a couple home as well and I’d almost forgotten how tasty they are. 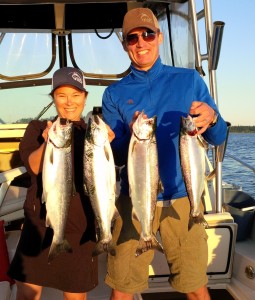 First timers went 6-6 to the boat with 4 hatchery!

The weekend was a little slower but a couple of charter boats landed a 15lb’r and a 20lb’r just off of Fisheries. Last Sunday afternoon “True Blue” a good local fisherman lost an estimated 25lb’r on a double header off Point Atkinson. He fishes solo so he had his hands full. He was right beside me when he got a second double and I almost talked one of my guests into swimming over to his boat to help him.

I finally got a day off and was invited on a friend’s boat to do a little “fun fishing”. That’s when I’m fishing but not at work. Murphy’s law we had strong Northwesterly winds that day but we still managed around 9 fish on the lines as we rode the rollers before it really kicked up. One of the hits that I had on was surely a spring that I lost. See, even I can loose fish but I don’t get too many opportunities to fight fish because I always pass the rod off (that’s my excuse and I’m sticking to it).

Earlier that day we saw a boat right next to us land mid to high teen spring solo! White hoochies are the standard fare for them 50′ and up but anchovies is a good thing to have down. I have noticed 4″ herring in the fish I’ve cleaned so I will also be experimenting with 4″ spoons primarily the green glo’s and of course my beat up, bent, chipped Homeland Security with all the teeth marks an it I’ve been mentioning in my previous reports.

Labour Day Chinook Classic is presented by PACIFIC ANGLER and MOSQUITO CREEK MARINA along with THE WEST COAST FISHING CLUB and CELEBRATION ON WATER.  Read more and register here! Or call Bryce at 604.872.2204 at Pacific Angler.