Well, the weather happened. Mother Nature gave us a quick taste of the summer weather to look forward to. The forecast going into next week is a little more familiar for spring. Madriga the infamous weatherman has told us to look for sun until Saturday afternoon then we can expect some unsettled weather and rain. 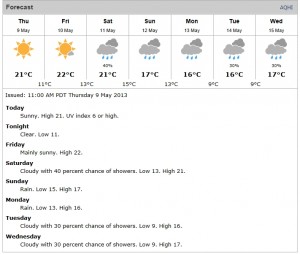 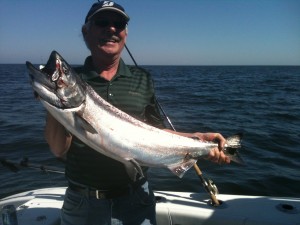 This past week out in Burrard Inlet at The Hump and at Thrasher Rock the weather has been great and so has the fishing. Georgia Strait Marine Forecast has light winds in the forecast till saturday then the over saturday night and into sunday the winds push up to 15-20knots southeast which will not have as much of an impact on conditions as the 15-25knot winds coming from the Northwest the week before.

If you are getting ready to head out that now that fishing has been heating up…please make sure your boat is outfitted to meet Transport Canada’s boat safety requirements  for not only a successful day on the water, but also a safe and prepared one!

Lake fishing in the interior should be good this weekend but again with the barometer will be dropping from highs of 29 yesterday to highs of 20-22 on Mon-Tues next week with intermittent rain as well.  We will keep an eye and ear open for updates! 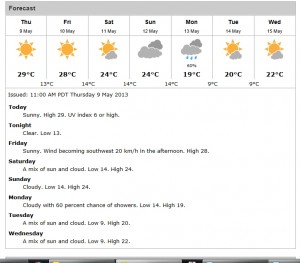 The recent spike in the weather has brought a close to local river scene as most the rivers are getting into full freshet mode now and mostly unfishable.  Keep your eyes on the Capilano though as a few Coho will be soon making their way into the Cap as that season begins grow.

To keep up-to-date with all things Pacific Angler and the local fishing scene check out Pacific Angler Facebook and on Twitter.  You will find our detailed river and saltwater reports below.  If you have any questions please do not hesitate to drop by our shop @ 78 East Broadway, Vancouver or give our friendly staff a call @ 604-872-2204.

John Kent was in Pacific Angler this week and was telling us about last season when he encountered a dilemma.  Fishing on Tunkwa Lake, chironomid hatching all around and struggling to get a take when he decided to switch it up.  He went full sink line with a microleech and did the speedy ole “two-hand” retrieve and started hammering them!! Sometimes even when conditions and hatches seem easy to match you have to think outside the box not only on your presentation but also the style of retrieve.

Flies: Are you all stocked up on flies?  Need idea’s on new flies?  We have a brand new selection of flies in-house here at Pacific Angler including  a wide range of flies supplied by the aforementioned John Kent.  Another great place to check out concepts for flies is by following posts on Pinterest where you will find pictures and descriptions like the picture here: 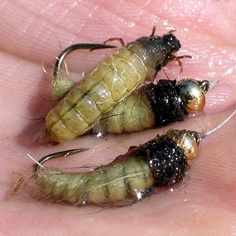 Stock up your fly-box with your selection of chironomids and microleeches and make sure you have a variety of sizes including 2-3 of each.  It is a horrible feeling to have a fly that is dialed in…then lose it to a hog or have it ripped up and not have a replacement fly in the box!

Thompson/Nicola: We heard good reports from people having success on Marquart and Lundbom last weekend.  The weather was certainly cooperating!  That being said, lakes are lakes and some will always be a little moodier than others.  Of course this is why our beloved sport is called FISHING not CATCHING!

Jacko lake has been performing well and lakes around Glimpse have also been putting out nice spring hookups. Most the popular early season lakes are all ice-free now including Community, Peterhope, Roche etc..

Horseshoe lake near Roche has an aerator to prevent winterkill.  This lake can produce some good sized fish if you catch it right early in the season.

Princeton Region: No reports on lakes per say but we have been told that the ice-free elevation is now at 4000ft.

Lakes should be finishing turn over in the elevations of around 3600ft and less. Ice was still on up at 4400 ft last weekend, but with those cooking temperatures will be off this weekend. So there’s still some ice off pre turn over fishing around up higher.

Fishing in deep water now is going to be the play. Don’t be afraid to ramp up your depth to get into the masses and hook a dime! Stump was fishing slow over the past week or so. Courtney, Kane, Harmon, Pass, Marquart and Lundbom, with elevation around 3400 should all be in primo shape for a while. It’s time to get out there. Keep note of the temperature in the 50′ range will be the best.

Remember to follow the popular posts/forums on flyguys or flyfishbc for additional lake conditions & reports.  Here is a great early season tip from Brian Chan that was shared on flyguys.net that talks about fishing on lakes that have yet to turnover.

Vancouver River Fishing Report: Pretty simple report regarding the rivers that can be summed up in one word: FRESHET.  We have heard of a few people scouting for early coho in the Capilano but we have not heard of any hookups.

However, Dimitri is excited about the weather change next week and potential drop in the baromoter which means he may call in sick and get 1-2 rod days on the rivers next week if the fall into shape again.

Finally after some relentless Northwesterly winds that hampered our fishing, the weather changed to hot sunny calm days. It feels more like summer!  These fish seem to like this weather as well as the fishing has also improved. The Hump off Bowen Island has had some slow days but is still pretty productive on overall.  On my last trip we hit our first fish in the first 10-15 minutes of getting the lines down and bagged a nicer fish in the mid 20′s shortly after. Both fish hit spoons. The 4″ Homeland Security @ 120′ and 4″ Kitchen Sink @ 90′. 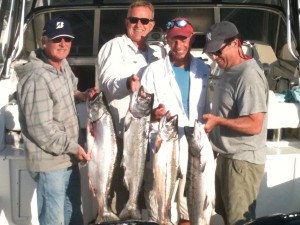 My previous trip also produced at 120′. That seems to be the range of depth. The most consistent depth reported seems to be 110′. A lot of fish are taking anchovies but spoons work best for me at the moment. 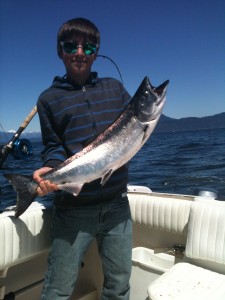 We decided to run across to the Gulf Islands to catch the slack tide and hit a couple  of fish within the first 10-15 mins there as well! The range of depths over there is from 130′ to 180′. At first I had a couple of Spakleback Hoochies in the regular and double glo but for me spoons were the ticket over there as well. That’s not to say that they don’t work but they just weren’t working for me. Those hoochies are pretty much standard issue there and I will continue to offer them  on future trips.

As well as the spoons I mentioned, the trusty Green Glo and Irsh cream I replaced the hoochies with also had their share of fish on bringing our total tally of fish on into the double digits. Some of the fish were undersized but most of the fish are in the low teens to 20lbs+. There have also been 2 fish in the 30lbs range that I’ve heard of so far. Definitely a good time to sharpen the hooks and get out there!

Posted on May 10, 2013 by Jason in FIshing Reports, Uncategorised