July broke a 60yr record as it recorded ZERO precipitation in the entire month. Now we have clouds and 30% chance of rain over the next couple days.

The pink salmon run continues to come in waves and should be a fairly significant sized run this season so fishing in Howe Sound, The Fraser and other pink destinations should experience great fishing over the next 6weeks.

The Merritt-Nicola Valley is expecting thunderstorms and showers over the long weekend.

It’s time to start moving away from W. Vancouver while trolling and targeting the springs as they are showing up off T10 and Bell Buoy markers now!

The roads around BC will be VERY busy with the long weekend.  Plan accordingly and please drive safe this weekend!

Around this time of year and as we have been saying the last few weeks, aim for higher elevation lakes.  Fishing will be best in the morning until the sun hits and then again in late afternoon / early evening as things cool down again. 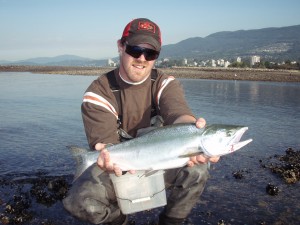 One of the best days in 3-4 years at Ambleside. No need to go way before low tide just half an hour before slack and into flood the fish went nuts, there were fish everywhere and the beautiful thing about it that there was only 4 of us on the Island. The day before they would not come in close but today the Pinks and Cohos where anywhere from 10 to 60FT from us. 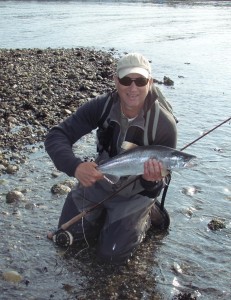 What a difference a day makes.  Again, 2 of my dedicated students Byron and Enrico were there and caught a bunch of fish including me breaking of 2 Coho and landing a pink. Everything you wanted to experience form beach fishing happened today. Fish finning, jumping, chasing and more. The fly “PINK PAM” did it again for all of us off course I tried a lot of patterns while I had the opportunity and was not successful today with them but maybe another day. I wish all the people that took the course could experience this day as they don’t happen too often.

Furry Creek has been fishing sporadic and is extremely crowded and tight for parking.  We heard that there was actually an argument on the beach amongst fisherman and that the police were called.  Its very sad to hear that a sport and a gorgeous place to fish has declined to these kind of situations.  Fishing is about camaraderie, respect, passion and etiquette.  We just hope this was a one off and that cooler heads will continue to prevail on the waters this year.

Squamish River Pink salmon are entering the river rather heavily now and we have had some great fly fishing success over the past week now. Yesterday there were a lot of people hooking fish on the fly. These are fresh as can be Pinks, silver bullets with a few sea lice on them and boy can they scrap. Flies of choice are pink and shrimpy looking on a size 4 hook. Fish are taking a slow retrieve or properly swung fly. This should be a very good fishery for the next 2 weeks. 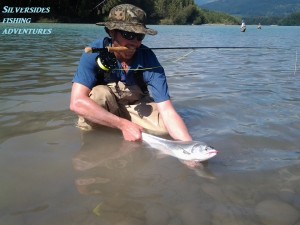 Fraser river Sturgeon fishing: has been tough for many over the past week but we are still finding some nice big fish, just have to work for them and stay on top of good bait. Many are reporting success on worms, lamprey, chubs, salmon parts, roe. I have noticed over the past 2 weeks that one day a certain bait nails them and a day or 2 later its something else. None the less, there are some big fish around and we intend to get them.

Fraser river Chinooks are open now and with decent visibility and water flow the bar fishing has been pretty good. Green top spin-n-glos are the go to for bar fishing. Make sure your mainline and rod can handle something big and tough. Fraser Chinook fishing really picks up around Aug 20 and remains strong until early October. Fish over 40 lbs are encountered frequently in the fall.

Sockeye are not open and I don’t think it will. These are the off-spring of the 2009 collapse and will take time to rebuild. The current good news is that the fish look healthy so let’s keep our fingers crossed. The Pinks will start showing in the Fraser river around Aug 20 in the Mission area and by later August it’s Pink salmon bonanza until the very end of September. It looks like it will be a huge run this year by all accounts! The Fraser should offer some excellent fly fishing for Pinks due to the ideal river conditions and visibility we have. Start tyin’ your flies!

Our friend and former co-worker, David Fauquier sent in this report on the Thompson.

Alex and I went to the Thompson River last weekend for his final Canadian fishing trip. On Saturday we fished my favourite spot up past Wallachin and did okay with medium sized hoppers (California Blonde, etc).  Funny enough 80% of the takes were on the start of the swing once the hopper was partially submerged under water.  Alex tried an experiment and floated a few live hoppers on the water.  Within 30 seconds a trout had inhaled the real thing.  It was interesting to see how high the hopper swam as well how good the hopper was at swimming.  Kind of a twitchy swim.

If hoppers didn’t work then I would switch to a smaller Madam X.  I did try nymphing stoneflies and while I got a couple fish they were not nearly as productive in the past.  I did notice that there were not many stonefly husks on the shore rocks so perhaps the best stonefly fishing is yet to come.

On Sunday we ventured down to Spencers Bridge and it was very quite.  We did see a few salmon boiling so perhaps the salmon have pushed the trout off their regular spots and put them off the feed.  The few fish we got were also on hoppers.  Again nymphing stoneflies was not productive at all.

Also I was using my Beulah 6 weight platinum switch rod.  It was awesome for casting big hoppers and bombing it out there.  It was slightly heavy for those fish but would be a perfect summer run steelhead stick on the island of Coq.

Hope all is well and look forward to catching up with you guys when in the city this week.

Wow!  Fishing over the last week has been outstanding. There are pinks,coho, springs and sockeye within ten min of downtown Vancouver. 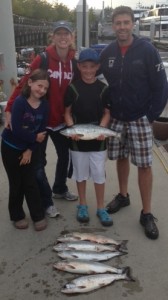 The West Van shoreline is the hot spot with many of my trips getting into 20-30 hookups. Most are pinks but there are some hatchery cohos in there and the odd spring. Sockeye are being caught now and again unfortunately it pains me to send them back.

I took a group into Howe Sound to target pinks with light gear. The action was fast and furious all morning. We did however have to dodge a few seals but it added to the sport. Pink buzz bombs worked best. 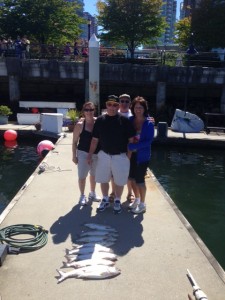 Wed evening on my way to my trailer I stopped in at fisheries and boated a coho and 3 pinks alone in 40 min.

Posted on August 2, 2013 by Jason in Uncategorised