The Steelhead Chronicles are an archived set of articles written by steelhead expert Matt Sharp.  We will be releasing one article per week.  Enjoy!

The life of a steelhead guide is one of cold early mornings, long hours and one all consuming, teeth grinding prayer, “Come on Fish, take that stupid fly.”

At times it can be stressful – not to mention tough on dentist bills, but between the fingernail biting and praying, we have the unparalleled opportunity to observe, teach and dissect what makes a good “steelheader”. 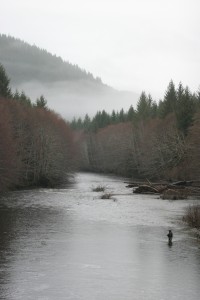 Waiting for the grab.

Even with an amazing diversity of styles, skills and personalities, it is easy to classify steelheaders in three groups.   The novice, who can count the wonderful real screaming runs on a hand and a few fingers. The intermediate, who has begun to understand the obsession that is steelheading, and the expert – who with time, dedication and skill has grasped a few of steelhead’s endless secrets.  For the most part this is the range of skill I see from my clients, but there is an elusive fourth class of angler. They are a rare breed who seem to possess an intimate connection with the river and an intangible knack for landing fish.

Guides call this class of fishermen ‘Vacuum Cleaners’.  They catch fish when no one else can and on days that the steelhead are kind, they rack up epic numbers that the rest of us can only dream of.

For years, I have tried to understand what makes the difference between “Vacuum cleaners” and the rest of us.  For the most part the answer is simple.  They are talented casters, have years of experience, and fish with confidence from the first cast of the day to the last. But there are characteristics that stand out.  I have compiled a few brief articles analyzing my observations, hoping to make things easer for us mere mortals.

The first skill I would like to look at is sometimes overlooked.  It is called the steelhead shuffle and all Vacuum cleaners have mastered it.

I met Loran Mellen six years ago.  She is a wee lady from Colorado who looks better suited for doting on grandchildren than chasing steelhead.  At first glance, I feared that a big fish might pull her into the river.  She fishes a single hand rod, does not have a monster cast, takes nice long brakes for tea – and like me, enjoys watching someone else catch fish as much as landing one herself.  That said, Mrs. Millen is a “vacuum cleaner”.  She lands more steelhead in a season than many take in a lifetime.

How?  It took me a few years fishing with her to understand it, but it boils down to three simple factors.  Though her cast is not long, it is precise and rhythmic.  She fishes with confidence without losing her concentration and most importantly, she has mastered the steelhead shuffle.

Let me take a moment to explain what I mean by the Steelhead shuffle.  Using the classic swung fly technique the angler casts somewhere between 90 and 45 degrees across stream.  When the swing is complete – dangling down stream for a good five seconds – the angler steps (plural) down river and casts again.  This process of “stepping” every cast continues until the end of the run.  It may seem simple but the way an angler moves down the bank of a river can make the difference between fish to the bank and no fish at all. 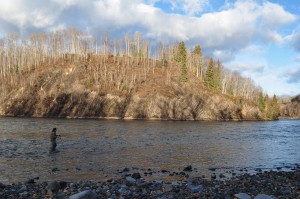 The first rule of the steelhead shuffle is to keep moving!  Do not stop, do not make more than two casts to one spot, and do not take baby steps!  Now this being said, I do not want to put pressure on those of us who are not comfortable with long fast steps in the water.  The river only knows how many times I have become cocky and ended up taking a swim.  You do not have to move fast – this is not a race.  Remember Mrs. Millen. (Though she didn’t look it, she was well past her 70th year)  Her steps were small and she took her time to pick through the rocks but she made sure to cover the same distance each time knowing that when the guide said three steps it meant she took five or six.  You save more time and cover more water making a conscious effort to cover distance rather than rushing a few baby steps and casting to almost the same spot.  All “vacuum cleaners” understand that the more water they cover in a day the better their chances.

Work to make the steps part of your casting mechanics.  Get a rhythm and stick with it.  Steelhead may be elusive but they are aggressive.  If you can show them the fly within a reasonable distance, they will take it.  After two casts to one spot, it is very unlikely there is a willing steelhead sitting in that stretch of the river so KEEP MOVING!

The second part of mastering the steelhead shuffle is distance.  How many steps should one take?  This is where a “vacuum cleaner” uses experience to make alterations to best cover the water.  Do not fret there are a few rules that will help you develop these instincts.  First take into consideration two factors; water clarity and water temperature.  These factors dictate how far the steelhead can see and how much distance he is willing to move to take a fly.  In warmer water 54 + with over four feet visibility, start with three to seven steps (6 to 14 feet).  Cover water!  Especially if you’re fishing with a partner.  Warmer water makes steelhead willing to move farther for a fly, so take advantage of it. There may be only one fish in a given run.  The faster you find him the sooner you can move to the next piece of water where there may be more.

In colder waters or with less visibility, slow down.  Use a two to three step rhythm. (3 to 6 feet) in extremely cold water.  Anything below the 49 degree mark, (mostly saved for winter steelheading)  aim for one to two steps (2 – 4 feet)

Now that you’ve got a rhythm, taking into consideration the temperature and clarity of water, learn to vary your steps to suit the river.  The vacuum cleaner looks at the run and dissects it.  From experience and common sense, he/she will see where fish are most likely to sit and vary the steelhead shuffle accordingly.  In water that looks “fishy” (in the sweet spot or bucket of the run), he will slow down subtracting a step, maybe two.  In water that feels “wrong” (The swing is not perfect, speed is not walking pace, or the structure of the river is poor holding water), he speeds up, adding a step or two into his routine.  This being said he still covers the water making every cast count.  He simply wastes less casts doing it.

Vacuum cleaners also use their shuffle to vary the angle of the swing. In the classic pool with little in the way of structure, this is unimportant, but in pools that have heavy structure (boulders, ledge rock, interesting currents) the angle that the fly swings in front of a steelhead can make the difference between a bent rod and a missed fish. I have seen numerous occasions where an angler moves through a run with no success and a vacuum cleaner comes in behind him with a varied angle of attack and hooks a fish. 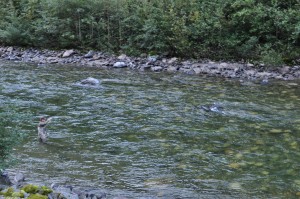 Choosing your angle of attack is critical to making a good presentation.

Look at the run, is a large boulder breaking the current? Is there a heavy riffle that plays havoc with your swing? These areas make for excellent steelhead holding water but the current can make swinging the fly difficult. An experienced angler will know that this is the time to vary his shuffle. Instead of taking steps directly down stream, step out into the river or vice versa, back towards shore to work around the structure. Try to keep about the same number of steps, only change their direction. If you are using a “five step” try two down stream and three across stream. In some instances, I will take all of my steps across river without moving down. I cover farther into the river but more importantly, I have changed the angle that the fly is swinging. I may do this for a number of casts until I can wade no further (especially if there is no one fishing behind). At the same time, there may be pockets of structure close to shore were wadding to the bank will cover the water more effectively.

This may sound simple but knowing when to take a few more steps out into the river or a few to the bank is an important skill. Wade carefully and understand that the few feet of added distance to you cast is not as important as the varied angle at witch your fly is swinging. The fish may be sitting only thirty of forty feet from the bank but taking a few more steps into the river will give him a different “look” at your fly.

I must note that this is not an excuse to wade across the river with the water lapping at your arm pits. I never recommend an angler to wade over his waste. Besides the safety issue, all vacuum cleaners are aware that if they are standing in waste deep water there is a very real possibility that a steelhead is sitting behind them.

Study the current and plan your attack. Look for the spots were you should fish your way out then fish your way back. With time, you will begin to find the “sweet spot” for wadding each part of a given run.

The last trick that an experienced steelheader can accomplish with his steelhead shuffle is depth control. In many conditions, swing a fly as close to the bottom is extremely important but a run rarely holds a uniform depth from start to finish. A Vacuum cleaner knows how to vary his depth with only slight modifications to his cast and shuffle.

In deeper water, or with light tips, start by casting more cross stream than the standard 45 degrees down. With an aggressive mend this will dead drift the fly for a longer period giving it fly time to sink.  If the desired depth is not achieved break up the timing of your steps. If you are using a five step, take four steps, cast cross-stream, mend then take your last step.  This will prolong the dead drift giving your fly and tip more time to sink before the swing starts.

The more steps you take after the fly has landed the deeper the fly will sink. Look at the water. Have you had any snags in the last half dozen casts? Your fly may need to be deeper so add more steps. Try two or three after your fly has landed. If you start to encounter snags, simply step more before the cast and less after.

There are a hundred variations to the steelhead shuffle but the successful ones all take into considerations the factors I have laid out.  Next time out on the water take a moment to think about how you are moving through the run. I can guarantee it will bring more fish to the bank…… and remember KEEP MOVING!  COVER WATER!

And remember if you would like to get the advantage for hooking up with steelhead on the fly Pacific Angler has two on-the-water classes coming up in 2012 for which I am the instructor.  They are “Steelhead on the Fly” and “Steelhead Spey Fishing”. 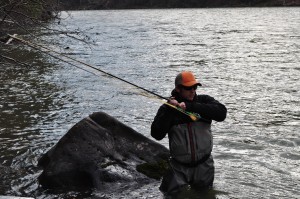 Posted on December 29, 2011 by Jason in Fishing Articles