From the bank of the river, I see my client’s rod bounce.  The line pauses.  The rod bounces again.  My heart quickens. The words “don’t set the hook,” whisper across my lips but I know that I don’t need to say it out loud – I have been drilling the concept all morning.

The rod tip bounces again, then stops.  My client shakes his head, calms shot nerves, and makes another cast. The fly swings and again the rod bounces, still the fish refuses to take. My client looks back at me with a defeated grimace.

He may not be happy that the fish refused to take – but for me, now is when the fun begins.  He has found a ‘player’ and together we are going to get him.

In the last installment of the Vacuum cleaner Chronicles, we looked at what can be done to minimize the Steelhead DTs – the heart shattering loss that comes with missed fish.  In this article, we will take it a step further to look at what happens after a missed strike, and the techniques used to entice the fish to take for a second, third, even fourth time.

The ‘playing’ steelhead is the bane of some and the ultimate challenge for others. What is a player? It is a steelhead that is willing to tug but refuses to commit to the fly. 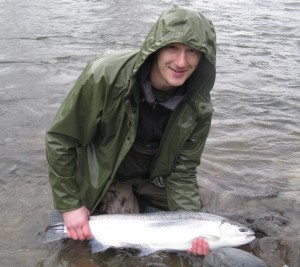 When faced with a ‘player’ many anglers make a half dozen casts to the same spot then give up, passing it off as a picky fish or trout.  Sometimes a second or third cast finds reward but there is a more effective method to deal with a playing fish.

The first thing to do after a failed strike is to calm shaking nerves.  Take a few moments. There is no rush.  When focused, make the exact cast that produced the hit.  More times than not, after a few moments – for both angler and fish to settle – the steelhead will come back and hammer the fly.

If he does not come back, it is time to change gears.  Don’t flog the water. The fewer casts you make over him the less chance he will spook or go lock jawed.  Look to the shore and mark your position, then take five to ten steps up stream (a solid 2 ft. per step).  Now with a controlled cast, cover the water one-step per cast down river.  If you have taken five steps up stream, make seven casts (with a 2ft step between each).  Cover the water thoroughly.

With this, you accomplish two things.  When the steelhead first hit he may have moved up stream or settled in a slightly different lie.  By stepping up river, you are guaranteeing that he hasn’t passed you.  If he has not moved, the time it takes to cover those five to ten casts gives him a rest.

Now, what happens if he hits again and doesn’t take?  This is the time to change flies.  In my arsenal of feathers, I have what are called “close-out flies”.  My two favorites are a small woolly worm or egg sucking leech.  The rule of thumb is go small, sometimes really small, size 8 or even 10.  If you are already fishing a small fly, go big.  The key is to give the fish something different to look at.

Once again, while changing flies there is no rush.  Take time to make a solid knot, check your leader and take out any nicks or tangles.  You may find your heart racing and your casting arm itching to sling line. Don’t give in.

With your new fly and calmed nerves, repeat the process.  Make one controlled cast to where the fish hit.  If you are not rewarded, walk up stream  five to ten steps and cover him with one-step per cast.  There have been times when I have covered a playing fish five even six times with multiple flies before he has finally taken my presentation.  If he continues to hit, don’t give up. 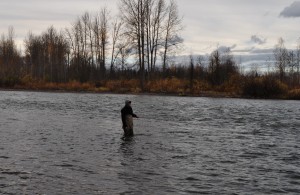 The only thing that should stop you is a respect for fellow anglers.  If you are fishing with a partner or another fisherman is behind you, it is a good rule of thumb not to fish through the water more than twice (three times if the hits are coming hard and fast).

If the angler behind you is becoming visibly frustrated, tell him that you are working a player.  After you have made two passes without a strike, point out where the fish last took and continue down the run.  More times than not with the knowledge of where to focus, the second angler will hook up.  It may not be as good as a bent rod, but you can take a little credit in his success and good karma is never a bad thing in steelheading.

Lastly, if the fish stops hitting but you are confident that you have located a steelhead, mark the spot with a rock on the side of the river and continue fishing through the run.  When you have covered the entire run, return to the spot and make one pass of the area (a half dozen or so casts, one-step per cast.)

Out of all the ‘players’ I have encountered at least fifty percent will take if you follow these simple steps.  The satisfaction of fooling a player is sometimes more rewarding than catching the fish hell-bent on swallowing your fly. 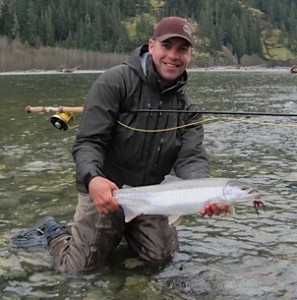 We hope you enjoyed the 3rd Installment of “The Vacuum Cleaning Chronicles” written by Matt Sharp of Pacific Angler. 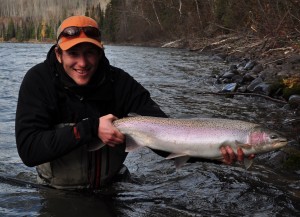