It looks like we are going to have a mix of sun and cloud with a little precipitation this weekend.  The rivers all came up on Thursday and today it looks as though they have crested and are on the drop.  This is good news for steelhead anglers heading out this weekend.  There are some nice mellow tides this weekend as well and I expect some decent winter spring fishing will be had over the next few days.  We are also hearing some good cutthroat reports from the Fraser Valley.  So there is lots of opportunity this weekend, steelhead, chinook, and cutthroat, take your pick!

There continues to be some good steelheading on the Chilliwack/Vedder, and with the river coming up hard on Thursday, and now on the drop, with some big tides early in the week, not to mention it is March!…. It should be pretty good this weekend!  It will continue to be mild in the Valley over the weekend with not too much rain, so the river will be in prime shape for Saturday morning.

There wasn’t as much rain in the Squamish area over the last couple of days as there was in the Valley, things came up a bit, but it is going to be pretty cold at night over the weekend and the rivers will be dropping hard and will be a medium to low height and pretty clear.  There have been a few fish caught over the last few days for those willing to put the time in, pretty typical for this time of year.

The cutthroat fishing on the Harrison and Fraser has been good this year and will continue to pick up as the fry start to emerge and the temperatures get warmer.

The local lakes have been quiet so far and things will pick up later this month and into April as the stocking programs take effect and the water warms up.

Things finally picked up a bit this week after a fairly lack luster winter spring season thus far.  There were some nice fish taken off W. Van, close to the bottom as usual, on green/glow spoons and anchovies.  The tides are decent this weekend (no big ebb tides) so fishing should be pretty good.  The crabbing has been good as well.  There have also been some good fish taken for those who have headed up to Howe Sound.

We are continually buying and selling vintage tackle.  If you have something you would like to sell or are looking for something in particular, give us a call.  Here are a few items we just received: 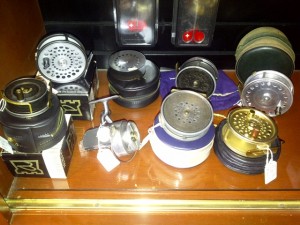 We are also received some custom tied leech patterns including some balanced leeches, micro leeches, and pumpkin heads. 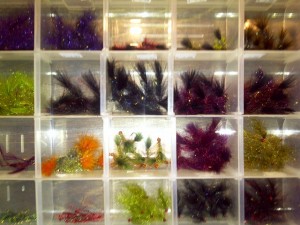